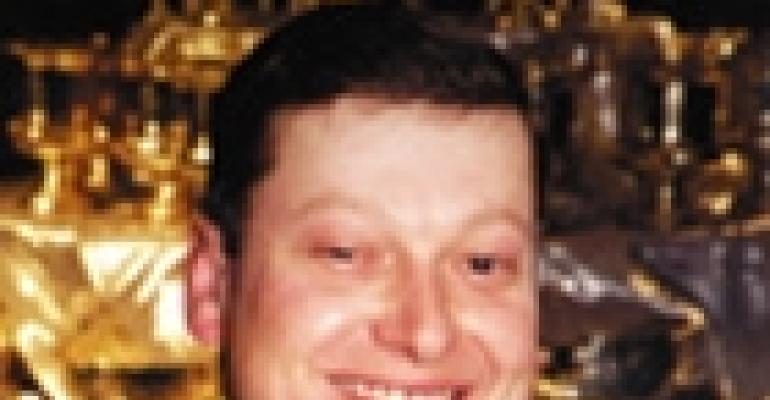 THE YEAR WAS 1995. London-based rental firm Thorns, in business 60 years, had fallen into receivership twice in the previous eight years. While others might have seen a company past its prime, Graham Langley-Jones saw something else. It was a sleeping giant, he says.

He helped the giant wake up. He bought the firm, kept several key staff members, including members of the founding Thorn family, and spiced up the inventory. The result: Revenue, which averaged 300,000 ($436,000) then, should hit 2.5 million ($3.6 million) this year, he says.

Langley-Jones has never been afraid to strike out on his own. Now 38, he began his career in banking in London but didn't enjoy it. He discovered that a catering stint in the kitchen, peeling vegetables was something he did like. He studied hospitality management for several years and then began working for foodservice giant Compass Group. That's really where I had my management training, he says. The margins are so tight, you need efficient management on board to make a profit.

Eager to run his own company, he bought an interest in a culinary hygiene supplier. Then he learned that Thorns was available. Thorns was a supplier when I was at Compass, he says. It was an opportunity too good to miss.

After taking the role of managing director, Langley-Jones invested more than 3 million ($4.3 million) in new equipment. He also revamped the company's philosophy. We have a never say no policy, he explains. Having been the client has helped. My senior management team is very aware of what the client needs.

In 1997, Thorns opened an office in Manchester, about 225 miles north of London. Manchester is an expanding city, and we wanted a northern post for our operations, Langley-Jones says.

All told, Thorns stocks more than 1 million pieces in inventory including cutlery, plates, tables, chairs, linens and flatware, but not tents or props.

For plates, rental clients today prefer simple patterns, letting the food do the talking, Langley-Jones says. But in linen, vivid colors are popular this year; people want a brighter look.

The Thorns operations help produce an average of 7,000 events a year, about a third of them social events and the rest corporate. Their scope varies widely: In April 2000, Thorns supplied the Vodafone dinner for 9,500 at Earls Court arena in London, the United Kingdom's largest dinner gathering under a single roof, according to The Guinness Book of Records.

Thorns also will serve weddings and funerals with orders for 50 glasses, Langley-Jones says. How can he make money on the small events? Carefully! he says. It's nice to have large events, but our bread and butter is smaller work.

Langley-Jones expects the work to keep rolling in. Things are steady in the U.K., he says. All bookings are livelier this time than last year. Everyone is aware of the U.S. [economic] slowdown. But we see five to six years of good growth in this sector.

Thorns itself will grow soon. Although he won't give details, Langley-Jones notes that along with organic growth, the company is actively pursuing acquisition of complementary operations in a bid to strengthen the company. We're on our way up, he says.

The skills that have helped me the most are that I am self-motivated, determined and have good management skills. This philosophy comes from my having been in the kitchen: The job's got to be done, no matter what.

THE SECRET OF SUCCESS

My advice to succeed in this business: You must enjoy it because you have to work harder in this industry than a lot of others. Enjoy it or get out.

WHAT'S NEXT IN CORPORATE EVENTS

The corporate hospitality sector is looking for something new, to entertain. It's a different dimension, not just dinner and live musicians. [They're] looking to have all manner of entertainment for hospitality. That is driving the market.