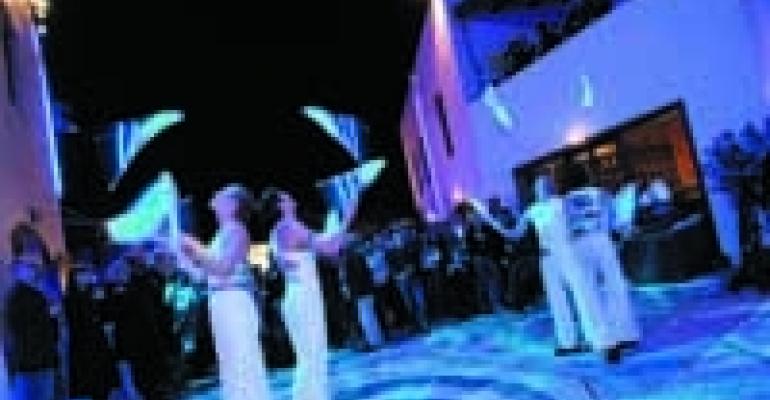 Members of the media see plenty of new products debut. It takes a new take on press previews to awe an audience that's been there and done that before. Read on to see how interactive environments make events worthwhile for the media.

Instead of falling back on another stale fashion show or mannequin display to announce a new brand of intimate apparel, New York-based EventQuest decided to bring art to the party. For client JCPenney's new Ambrielle collection, the largest brand launch in JCPenney history, according to EventQuest CEO and executive creative director Mark Veeder, the line of sleepwear, bras and panties needed a fresh, hip launch last fall.

At Manhattan's Chelsea Museum of Art, 250 members of the media enjoyed a display of iconic images of women by painters including Kahlo and Degas. Models wearing the Ambrielle collection posed in tableaux vivants. Ingres' masterpiece “Le Grande Odalisque” served as the base of one vignette with a model echoing the famous stance complete with a fan of peacock feathers.

Alongside these classics, a variety of more recent pieces by emerging artists added to the atmosphere. Forty works of art depicted each artist's own interpretation of sensuality, which clued guests into the Ambrielle brand's “unique perspective of sensuality both past and present,” Veeder says. Since the media has “been everywhere and seen everything,” Veeder says, “you need to continually come up with fresh and new ideas to keep their attention.”

With a beauty line launching in the U.S., U.K.-based drug store giant Boots wanted to educate American consumers about its stylish cosmetics line. To bring Boots to U.S. consumers, New York-based Paint the Town Red looked back on the venerable company's 150-year-old history.

Paint the Town Red crafted a mock apothecary at New York's Boylan Studios in February. “The press conference area was decorated with dark wood-paneled counters and display cases, antique cash registers, mortars and pestles, and other props from a 19th century apothecary, where Boots was born,” says Howard Givner, president of Paint the Town Red. Treating 80 journalists from fashion and lifestyle publications to the old-fashioned scene helped the editors “fully understand the history and pedigree of the company,” he adds.

An intimate introduction to Boots' products followed the press conference. “Dedicated product specialists gave 6-minute introductions to small groups of editors,” Givner says. The smaller groups allowed for a personal experience with each product. Givner stresses the importance of a clear and consistent message. “Stick to a few key messaging points you want the media to take away, and then hammer them home over and over,” he suggests. “Repetition in various mediums — signage, collateral, video, staging, etc. — counts.”

As for future product launches, Giver says experts are turning to viral methods for long-term exposure. “Examples include providing podcasts of the press conference or launch for people to download who couldn't attend,” he says, “and insuring that influential bloggers are covering the announcement.”

It was up to the Imagination team to engage the journalists during their stay in Rhodes. “Every aspect of the event should tie in seamlessly with the company message, as theoretically, every aspect of the event could be used as a possible press story,” says Ursula Morrish, Imagination account director. Communi-cation counts: “How you communicate this news is very important — the method of communication should be fun, exclusive, interesting and hands-on,” she explains.

For example, two parties kept guests entertained while introducing new Sony products. On the first evening, guests arrived at the host hotel — the Sofitel Capsis Hotel and Convention Centre — to find the meeting space revamped as a club. “Creating the nightclub out of the meeting space — there was a surprise and delight element there,” says Imagination's creative director Lee Munden. Keying in on the new Sony Video Walkman, guests enjoyed music and visual treats from a VJ — video jockey — instead of a DJ.

The second night saw an entire street in Rhodes' old town transformed into a blue-tinted wonderland to promote Sony's Blu-ray disc, a DVD player that operates with a blue laser. Imagination used blue architectural lighting to set the right mood. The evening also included street performers with light-based performances. “All aspects were considered for their graphic look and feel,” Morrish says.

Instead of concentrating on PowerPoint presentations and lectures, the workshops showed participants how the new Sony products might fit into their life. A Chinese dragon dancing around the room provided a focal point for journalists experimenting with Sony's Handycam product. Interaction is an important element for press events, Munden points out. “Media events are becoming more personal to the guests attending,” he notes. “Gone are the days when the media were invited to one dull space, where a CEO would talk for hours, and they would see the product from afar.”

Event experts share the basics of presenting new products to the press.

Howard Givner, Paint the Town Red: “Each guest represents readership/viewership of thousands — if not millions — of potential customers, so you have no margin of error and really have to be on top of your game. If you really nail the experience, you leverage their impact in a positive way.”

Ursula Morrish, Imagination: “Members of the media don't want to feel as though their time has been wasted, so stress-free travel and a choice of what they do when they arrive is crucial. You should also allow downtime for media to write and check e-mail.”