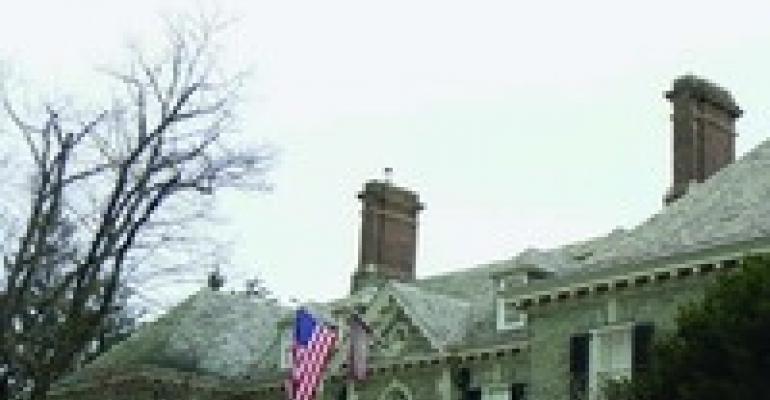 The Methods of Modern Clubs

Country clubs aren't known for their cutting-edge style. Their appeal has far more to do with celebrating history than keeping up with the trends. That said, even the most traditional institution must update to remain relevant. From renovations to menus to decor, private clubs are evolving, and three tell us how.

History is part of the landscape at the Stones River Country Club in Murfreesboro, Tenn. The club was established in 1947 and sits atop an 1862 Civil War battle site. Yet, the country club has made a strong push to appeal to the tastes of the present by “blending antebellum old South with modern amenities,” notes catering and special events director Rebecca George. The result is an atmosphere that engages members ranging from thirty-somethings to seventy-somethings.

All ages were pleased by the club's renovation in 1999, when the old clubhouse was torn down to make way for a new one. Members gained a 400-guest ballroom, a lobby with a 40-foot ceiling, an updated kitchen and a meeting space for smaller gatherings. Since 1999, the club further upgraded by installing wireless Internet, purchasing flat-panel TVs for the dining rooms and bar areas, and offering an LCD projector for meetings and events.

The club food received tweaking as well. Executive chef Matthew Rush stays on top of menu trends, so members may find black and white truffle oils, micro-greens, exotic salsas or organic foods on their plates, which are now square, rectangular and oblong instead of round. Ice sculptures and height-boosting crates and marble slabs are often part of food displays. And buffet skirting is sleeker in whites, blacks and browns. Even the chef coats weren't safe from change: Many chefs now sport seersucker versions.

And the parties themselves run the gamut. “We cannot simply do the same thing all the time, or we will lose our audience,” George notes. Recent event themes include live trivia night, casino night, wine tastings, weekly golf tournaments with live entertainment, a piano bar party and even comedy shows.

Providence Country Club in Charlotte, N.C., got a major facelift in January 2007 when management addressed everything from the floors to the artwork. New carpet, hardwood, credenzas, brass wall sconces and paint were all part of the overhaul. As a final touch, country-club-themed art replaced the less cohesive pieces that graced the walls previously.

The dining room also saw its share of changes. The ivory china with gold rims was retired in favor of china with a simple floral design. Lightweight flatware “that had a 1980s look to it,” according to membership events coordinator Laura Cady and catering director Dee Wood, made way for heavier, more sophisticated forks, spoons and knives. And the Providence team opted to completely diversify stemware. Before the club had one type of wineglass — now it has corresponding stemware for red wine, white wine, champagne and water. Food offerings received an upgrade too, and now members feast on wine-poached mussels, white asparagus risotto, lightly smoked tomato nage and strawberries sabayon.

While sophistication defines the club decor and food changes, events cast a broad net to entertain families with young kids. “Traditions are fine, but the days of men wearing coats and ties just to come to dinner are gone,” says food and beverage manager Glenn M. Batten. So the club has created events to correspond with tastes of this younger demographic. Events include “Music on the Lawn” with live music, “Halloween Spooktacular” with children and adult costume contests, “Dippin' and Dancin'” with pool games and “Movies on the Lawn” with a drive-in movie theme.

And the club isn't afraid to call in backup for big events either. Their casino-themed New Year made quite a splash with members playing slots, craps, roulette, blackjack and Texas Hold 'Em, all led by professional dealers on gaming tables rented for the evening. Food stations, heavy hors d'oeuvre, dice decor and a live band added to the festive evening.

EAT, DRINK AND BE MERRY

While country clubs figure out how to interest a younger crowd, the Charter Club at Princeton University in Princeton, N.J., has pursued this objective since 1901. “If you don't follow the trends to attract younger people, your base will dry up,” notes club manager Steven E. Moskow, CEC.

Charter Club is one of many eating clubs at Princeton that provide meals and events for students and alumni. And while the age of Charter Club's audience doesn't change significantly from year to year, the club itself has. Charter Club has sought to emulate a restaurant experience with the help of Moskow and executive chef Thomas Evgeniadis, both graduates of the Culinary Institute of America. It's a big step for an eating scene once run by former U.S. Army cooks.

The key to keeping the interest of easily unimpressed students is to offer diverse food options and inventive theme nights, Moskow explains. One such event was Charter Club's “Snakes on a Plate” dinner — a spoof on the 2006 movie “Snakes on a Plane” — that included “delicacies that were all ‘snake-like,’” Moskow says. The circle-your-choice menu included French-fried spicy “buffaloed snakes” of chicken with “coil snakes” potatoes and blue cheese dip, “King Cobra” chilled sesame noodle salad as well as giant gummy “anacondas.” A dinner themed to the TV show “The Sopranos” featured checkerboard tablecloths, “The Sopranos Family Cookbook” as a door prize and a menu featuring recipes from that cookbook. The club has even capitalized on the celebrity-chef craze by having a celebrity chef-inspired night with Evgeniadis interpreting superstar chef Bobby Flay's dishes, such as a roasted cornmeal-crusted chiles rellenos, infused honey-rum black beans and saffron-cilantro rice.