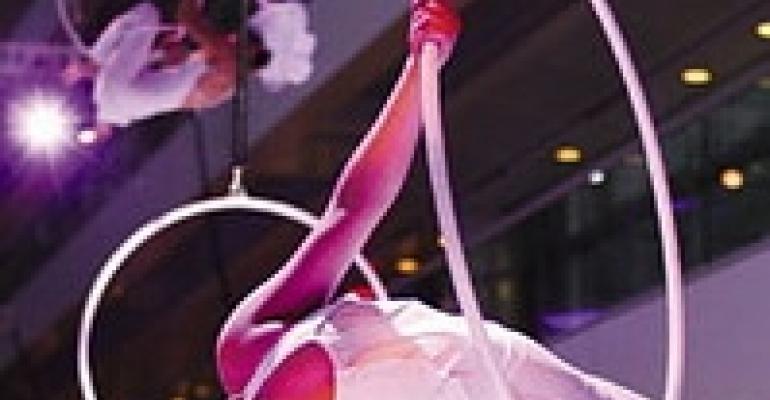 To come up with a design for a pharmaceutical company meeting's farewell dinner, Dominique Kennan of Montreal-based event firm Mina Martini didn't have to search far for inspiration. Indeed, it was right there, in the bounty of Montreal's world-famous artists, musicians and visionaries. These cultural icons — from soulful songwriter Leonard Cohen to diva Celine Dion to Cirque du Soleil mastermind Guy Laliberte — were the touchstones Kennan tapped in her pitch to incentive-operator client Jonview Canada. And it was their artistry and innovation upon which Kennan based an event designed to evoke the “magic, mystery and poetry” of Quebec's capital.

Of course, ample inspiration is one thing. Taking that inspiration and transforming it into a 220-guest dinner and stage show set in an office-building atrium is quite another. Kennan knew that while the event space — housed in Montreal's distinctive Parquet du Centre CDP Capital building — was impressive, it also was fraught with challenges.

For one thing, the long, narrow atrium forced Kennan and her crew to forgo a traditional stage, and instead install a catwalk-like structure for the evening's sensual, surreal performance piece. “This decision brought on a whole new challenge, however, since the show we designed would then be viewed from all directions,” Kennan recounts.

The scant number of available trusses created further headaches. Kennan had originally slated multiple pieces of technical equipment, including moving lighting and projection units, to be positioned together on the same truss. However, “Any movement, regardless of how subtle, has a sizeable impact on how images are projected,” she notes, “because the movement is multiplied by the distance separating the projector and the screen.” Close review of the equipment combinations and, in certain cases, elimination of moving lights, resolved the issue and made for a smooth show.

But all of the technical know-how in the world couldn't overcome Mother Nature. In this case, the eve of the summer solstice brought a flood of sunlight into an entirely glass-enclosed space. Knowing that she couldn't beat the brightness, a clever Kennan decided to use it to her advantage. “When a production requires an elaborate tech rider, it's a good idea to try to optimize the use of the often-costly equipment the client is paying for,” the producer notes. “Our team suggested to the client that we move back slightly the time the gala began” in order to allow the summer sun to light the early part of the evening while saving pricey electrical lighting for later.

On the evening of the event, the guests, much in need of an entertaining escape after an intensive week of HIV-related seminars and meetings, got what they came for.

After a cocktail hour on the sun-warmed patio, the global contingent of attendees enjoyed their first taste of the Montreal-inspired excitement to come. Aerial acrobats twirled above while guests took their places at 27 square tables laid out in three rows, “which emphasized the space's vertical quality,” Kennan says.

Once seated, guests savored a round-the-world culinary expedition that included salmon with tandoori spices, Spanish caviar and sea bass cassoulet. The dinner's female servers wore their hair in French chignons, while sporting ensembles in a striking, modern palette of black and lilac.

While small details such as waitress wardrobe and music — the evening's ranged from electric harp to laid-back lounge — were essential to the overall feel of the event, the real showstopper was, well, the show.

Hinging on a narrative Kennan calls a “phantasmagorical odyssey,” the two-act performance, stretched out over the course of the dinner in order to build suspense, involved a wand-wielding magician's apprentice, dancing candlesticks, acrobats, a human beat box and a diva-and-electric-violin duet. In all, the production was “a breathtaking living dream,” Kennan says.

Working on the $200,000 event was exhilarating for Kennan, who says she is particularly grateful for the gift of creative freedom Jonview granted: “We are ‘corporate artists,’ and consequently our greatest satisfaction comes from the freedom we are given to express our boundless creativity. For projects like this one where we are pretty much given carte blanche, we give it all we've got!”

At the same time, she notes that, if she had to do it again, she might not have granted quite the same degree of do-what-you-will to all her assembled vendors. “We gave a certain leeway to our stylist and accessories manager for the show, and some accessories ended up being a little less compliant than expected,” she says. “These details were only picked up by our razor-sharp eyes, but as we in the industry all know, no detail is too small!”