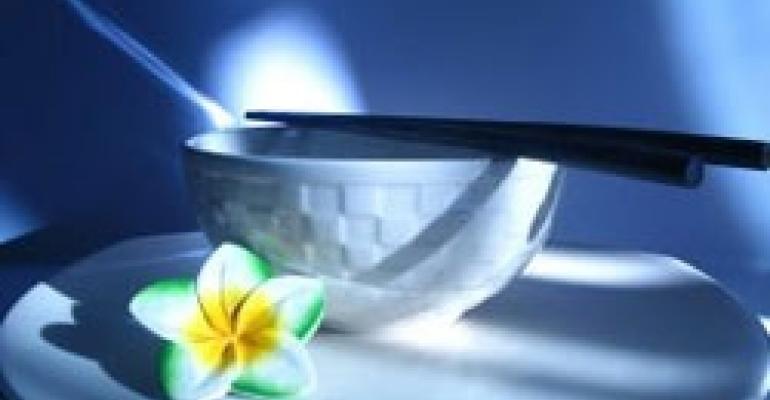 “In tough times or boom times, it's what the customer touches, what is at eye level, that has the strongest impact,” says New York restaurant consultant and designer Clark Wolf. Here, Wolf and others explain which styles of dinnerware pack a punch.

“In the last 10 to 15 years there has been such a renaissance in American cuisine,” says Scott Hamberger, vice president of Chantilly, Va.-based Fortessa. “Why not have American tableware that complements that trend?”

This year, Fortessa will introduce several new lines of uniquely American china and flatware. One is Grand Hotel, a flatware line Hamberger describes as “inspired by the tradition of ‘grand hotel’ flatware in terms of the size and articulation of the piece.” Instead of the traditional European design accents associated with grand hotel flatware, such as the fleur de lis, Fortessa's line will feature American federalist graphic elements.

Fortessa's new American Collection is the result of an ongoing collaboration with Wolf. “It's called the American Collection not because it's all going to look like flags,” Wolf says. “It has to do with our sensibility as Americans. We want things a little heartier, and definitely with a melting-pot feel.” Among featured china is a white-on-white wide bowl with a triple-line rim and an oversized line at the base, designed for dramatic presentation.

“The new look in tableware can best be described as ‘form and function’ shapes,” says Grant Clewes-Garner, hotel and restaurant vice president for Villeroy & Boch, based in Luxembourg.

Recently, Villeroy & Boch introduced three new porcelain patterns that “achieve the ultimate in form and function,” according to Clewes-Garner. Based on the palm leaf shape, Hot Palm features several sizes of flat and deep pieces in white porcelain and green glass. The Hot Wave pattern includes interrelated geometric shapes softened by curves. Named for Italian chef Gualtiero Marchesi, the Marchesi pattern features three plates of equal diameter and varying rim widths. Citing the modern lines and monochromatic elegance of each of the new patterns, Clewes-Garner says that his company's goal is to provide culinary experts with “a stunning canvas,” and let them do the rest.

“The clean look has always been timeless and highest in demand,” says Jim Carter, president and owner of Downey, Calif.-based china manufacturer Crown Parian. “Very ornate patterns have a tendency to become ‘tired’ and also show more wear after less usage.” He notes that white or ivory dinnerware with single or double gold or platinum banding is always a best seller.

“Where platinum and silver have been in for several years, gold is decidedly back in,” says Lonny Eggleston, co-owner of Rancho Dominguez, Calif.-based Unique Tabletop Rentals. Particularly popular for social functions, Eggleston says, is elegant china featuring wide or thin gold bands.

According to Hamberger, a bamboo-handle pattern that is part of the new Clark Wolf-designed For-tessa line blends a '50s-retro look with a solid feel. “What we've done is taken the basic concept of a bamboo twig and made it wider and thicker and heavier than just a twig would be,” he says.

Stern says his clean-lined Montecito flatware “is a very hot pattern.” In general, he notes, clients seem to be looking for items that are “slightly bigger and slightly heavier — though we're talking about grams here, not ounces.”