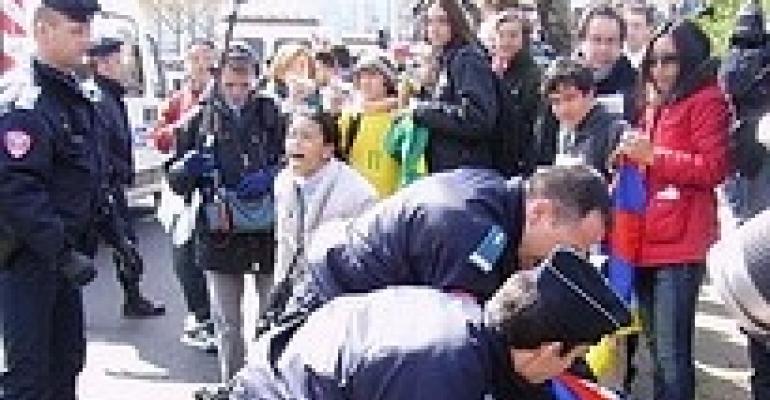 Although the Olympic torch relay was intended by Chinese officials to showcase the country's new prominence and prosperity, it has instead become a lightning rod for protestors angered at the country's policies. The relay began last month in Greece and ends Aug. 8 in Beijing with the kickoff of the Olympic Games.

In London on Sunday, one protestor briefly grabbed the torch, and another shot a fire extinguisher at it. The next day in Paris, the torch had to be sheltered in a bus guarded by police on in-line skates.

China's policies have angered a range of activists, from those decrying its support of the regime in Sudan to pro-Tibet groups to defenders of the Falun Gong faith, who claim persecution by Chinese authorities. Activists think their best bet to draw attention to their causes comes with the relay, which runs through 21 cities before reaching China. Once inside China, such displays will be blocked by government media, observers predict.

Local law enforcement is on high alert today in San Francisco, where the torch will make its sole U.S. stop. With so many groups angered at China's stances, police expect a volatile situation. On Monday, three anti-China protestors climbed the Golden Gate Bridge and fastened a Tibetan flag to the span.

Mayor Gavin Newsom has vowed that the relay will go on as scheduled. Observers say that to avoid confrontations with protestors, several torch routes are planned.

And in another black eye for China's image, Olympics officials monitoring air quality in notoriously polluted Beijing announced Monday that during the Games, they will postpone events as necessary on days when the air is too bad.