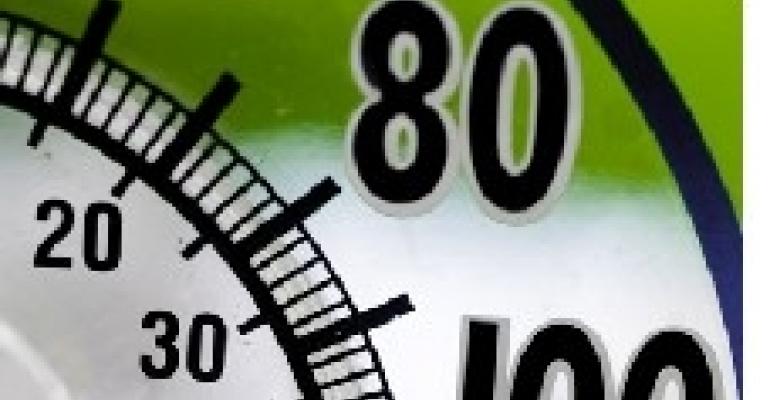 This summer, everyone is feeling the heat. The first half of 2006 is the hottest on record in the U.S., while one sweltering day last month in London saw 39 people faint while visiting the gardens at Buckingham Palace.

The miserable heat has been making the hard work of producing special events even harder. But as temperatures rise, caterers are rising to the occasion.

In the Los Angeles area, temperatures have reached 120 degrees Fahrenheit (49 degrees Celsius) in some locales, says Richard Mooney, president of Los Angeles-based Kensington Caterers. The heat did not prompt any event cancellations, though, and the company has kept guests comfortable by bringing industrial fans to some events and adding a large, air-conditioned tent to another, Mooney reports. "We also set up tubs of small bottles of chilled water around the party space to allow guests to hydrate frequently," he says. For one event, he served a chilled version of the warm soup he had originally planned. One of his biggest challenges: "Trying to convince the staff that it wasn't really that hot and to stop whining!"

Renaissance Caterers of Canoga Park, Calif., catered the Coronation Ball at L.A.'s Shrine Auditorium for the Miss Universe Pageant on July 23, where earlier in the evening pageant winner Miss Puerto Rico fainted. "No air conditioning in the kitchen, Expo Hall air on only when expecting guests," reports co-owner Cathee Hickok. "Basically you add ice and dry ice and refrigerators and fans and keep a really close eye on the food temperatures. All cold food on buffets is served from ice pans." Her team also handled corporate hospitality during the Countrywide Classic tennis tournament at UCLA on July 24. "We were going to try a swamp cooler [evaporative cooler] in one tent--air conditioning would have been $9,000--but the humidity was too high for the swamp cooler to do any good."

Along with keeping food chilled, Hickok also keeps her staff chilled. She invested in Chill-ez bandanas, which hold a cooling gel close to the neck of the wearer. "Few things are worse than being served by a soggy, heat-prostrated waiter whose brain is addled like a fried egg!" she says.

She has kept her sense of humor about the heat: "OK, I understand--I've been bad and this is Hell."

During Chicago's long hot summer, caterer and event management company Blue Plate used witty touches to keep guests cool at events. During an outdoor wedding in June, the company used mini bottles of Pellegrino water as place cards, each bearing a tag with the guest name and table number. At another summer wedding, Blue Plate gave guests little fans, which included the menu card, program and other event information.

In sultry Atlanta, where temperatures have routinely been topping 95 degrees Fahrenheit (35 degrees Celsius) this summer, A Legendary Event has added air-conditioning units and misting machines to events to keep guests cool, reports company head Tony Conway, CMP. "We also make sure that valet parkers turn up the air conditioning when delivering cars to guests," he adds.

He changed his staff attire from formal to more casual--"We wanted to make sure that they not only felt cool but looked cool and were not sweating in tuxedos," he explains. On steamy days, his staffers don khaki shorts or pants and polo shirts. Evening attire is black linen pants with short-sleeve black linen shirts.

Although the heat has not forced him to cancel any events, Conway has moved many wedding ceremonies to later in the day to avoid the worst of the heat. And, "We turned down two pieces of business that did not want to provide temperature control or at least tented areas to create shade," he says.

The summer heat makes July traditionally the slowest month for Mitchell's Catering and Events of Raleigh, N.C. "It's usually a time to review the first six months and plan for the next six," reports director of operations and logistics Bill Allen. But this year brought the company a big job: catering the Pepsi Americas' Sail festival in Beaufort, N.C., June 30 through July 4. "We catered one large event each night for 450 to 750 guests while simultaneously catering up to nine smaller sponsor events of 70 to 200," he reports.

To cope with the heat, "Great care was taken regarding food preparation at our base camp kitchen and getting it on site," Allen explains. "We had a refrigerator/freezer semitrailer both at the base camp and on site to ensure perfect temperatures. Replenishing of buffets was also critical, and we were careful not to spread out too much food. We instead ran smaller quantities to ensure food safety and presentation."

Farther south--in Miami--this summer's heat is "about normal for south Florida," reports John McPhee, marketing director of Miami-based A Joy Wallace Catering Production & Design Team. With hot summers the norm, "We always have lots of staff water and staff Gatorade," he says. Also, "We allow extra setup time; people cannot perform as fast in the heat." Joy Wallace management encourages staff to take frequent water breaks and to report any side effects from the heat--affecting themselves or coworkers--immediately.

His company has learned how to work in the heat: "You make the mistake of using a clear-top tent and not having adequate AC to cool down your 'temporary greenhouse' only once," he says wryly.