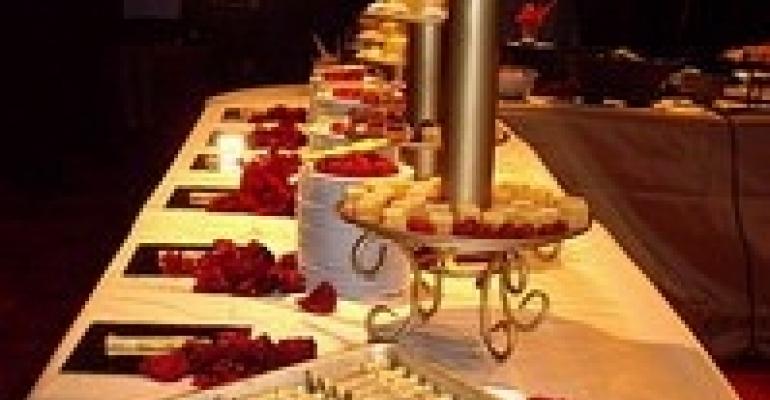 Though the three-month writers' strike threatened to freeze out Oscar festivities, the parties resolved their issues and the parties went on Sunday night.

The biggest--the 80th annual Academy Awards Governors Ball--took over the Kodak Theatre in Hollywood for an evening of glitz-free glamour. Designed and produced by Sequoia Productions and catered by Wolfgang Puck, both based in Los Angeles, the event honored its venerable legacy by keying on two iconic Hollywood themes: the red carpet and the gold Oscar trophy. For details, click here.

A party high on the glam quotient for the last 13 years--the Vanity Fair event--cancelled in early February, with management blaming the tense mood in Hollywood. But that only helped move Sir Elton John's 16th annual AIDS Foundation party, held at the Pacific Design Center in West Hollywood, to center stage. The event, catered by Crumble Catering and Mark's Restaurant, raised $5.1 million, organizers report.

A stone's throw away, at The Abbey, actress Jennifer Love Hewitt hosted the seventh annual "The Envelope Please" viewing party, where more than 500 guests were on hand to raise $500,000 plus for AIDS Project Los Angeles.

The menu included signature cocktail salutes to the nominated films, including the "AtoneMint-tini," "Michael Clayton's The Fixer," "No Cosmos for Old Men" and "There Will be Blood," a brew of blood orange juice and vodka. Decor mixed silver chiavaris--saluting APLA's 25th anniversary--with blue linen, silver-painted branches and a white tent top sprinkled with twinkle lights.

One of the hottest parties was one of the hardest to get into. Mega-agent Bryan Lourd of Creative Artists Agency hosts 400 AAA-list guests at his home on Oscar night. Produced by KWL Designs with flowers by The Velvet Garden, both of L.A., the event offered heavy hors d'oeuvre and desserts. "This seems to be the favorite way of entertaining since you can freely mingle with all the guests but still be full from the constant offerings of little bites by our wait staff," KWL founder Kai Loebach tells Special Events.

The parties held on Oscar night are only part of the picture. Many other guilds host their own events--often replete with Oscar nominees--during the weeks leading up to the official ceremony. KWL also handled the annual Oscar party for the Society of Composers and Lyricists, while Tarzana, Calif.-based Someone's in the Kitchen catered the event honoring Oscar-nominated foreign language films for the Academy.

And you don't have to be in Hollywood to have an Oscar party. The Newport Beach (Calif.) Central Library holds its pre-Oscar party, produced by Newport Beach-based Dinwiddie Events, every year. The event includes a reception and lecture, and even champagne.