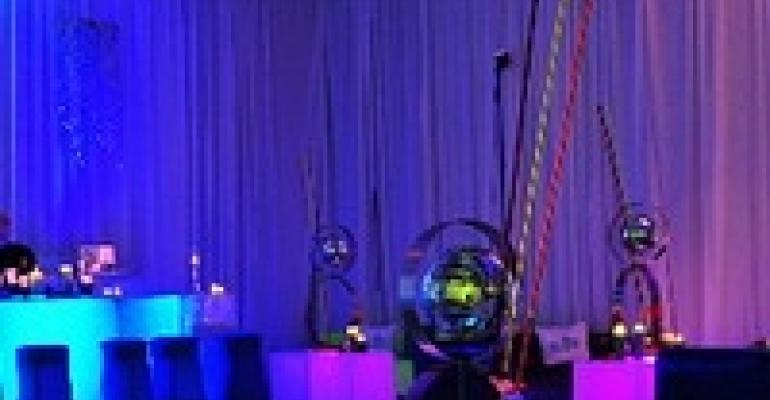 When an event pro designs a party for a family member, you can be sure it's going to be something special. But even Tracy Fox herself admits that her son's December bar mitzvah was a little, well, over the top. “I created a monster,” she laughs, noting that a client seeking the same scope of decor and entertainment could expect to spend $75,000 to $100,000. For all its thoroughly enjoyable excesses, though, the 230-guest event was also a once-in-a-lifetime chance for Fox, president of East Hanover, N.J.-based Party Artistry, to try out a few new tricks — and learn a couple of valuable lessons along the way.

While Fox says her son's involvement in planning was limited — “Slater was involved in that we told him what we were doing and, thankfully, he was OK with it,” she admits — the guest of honor did have a hand in one of the most important elements.

Fox initially planned to use the family's synagogue as her reception venue thanks to its ample size and layout. But, she recounts, her son said, “Mommy, if we told people we were having a party in a temple, they'd think it was going to be a really bad party.”

That's when the planner came up with the idea of inviting guests to the synagogue, but dubbed with the much more enticing name “Slater Street at the Montrose Mansion” — a play on the venue's address.

Fox designed the event as a progressive party where guests would move as a group from room to room, with adults and children separating and then coming together at various points. With the help of her mother, Party Artistry executive director Judy Davis, and her husband, Marty Fox of Irvington, N.J., Almar Party and Tent Rentals, she organized the space into six different sub-parties that spanned the synagogue, an adjoining building owned by the synagogue and a tent. Load-in and setup involved an army of vendors, including lighting, rental, audiovisual, linen and staging providers, and took four days — significantly more than most dinner-and-dancing mitzvah receptions, Fox explains. “This party was structured differently than any other party I've ever done,” she says. “It wasn't a club, a sit-down dinner or a buffet. It was this X-factor.”

Fox says that on event night, she wasn't quite sure how, or even if, guests were going to move en masse from party to party as planned. But after cocktails in a tent dramatically draped and lit by Don Calhoun's Draping and Lighting of Huntingdon Valley, Pa., and outfitted with 15 red crystal chandeliers and a tufted red velvet bar (kids broke the ice in a separate space with video games, a Velcro wall and nonalcoholic frozen drinks), move they did. They proceeded into a multi-room mansion space furnished with soft seating and accented with rugs and lighting to enhance the site's Victorian beauty. There, adults and kids joined together for speeches and blessings from the mitzvah boy's proud parents, simulcast on monitors in rooms where guests couldn't view the speakers live. “The plasma screens didn't look very Victorian,” Fox admits, “but we made it look pretty.”

A bongo drummer soon rallied the group into a lively conga line that traveled 240 feet across the building to dinner.

Then it was on to “Slater Street Underground,” where young and old again reunited, this time in a white-draped, white-carpeted space that “looked like one big dance floor,” Fox describes. Banked with four LED-lit Lucite platforms and set with lounge seating, the room featured a club DJ perched 8 feet above floor on a scaffold. To help the well-traveled crowd regain its energy, professional dancers, live musicians and poi spinners took to the floor to mingle with guests.

Finally, the group returned to the adult dining space, which Fox's team had stealthily transformed into a “Viennese dessert room” — a turnover the planner admits now she might have jettisoned had she the event to do again. “Logistically we made a mini nightmare when we changed that room over for dessert,” she says. “It was tough on staff and not really necessary to do.”

The progressive party went off without a hitch; in fact, the crowd was so excited for each new reveal, “We were five minutes ahead of schedule” throughout the evening, Fox says.

As for the planner-parent herself, she says she was able to enjoy the event thoroughly with the proper “psychological preparation,” as she puts it. “Week in and week out, I'll look at a client and I think, ‘She's so nervous that she's not able to have fun and enjoy the party, and she just spent $150,000,’” Fox says. But as for Fox herself: “I willed myself to take the advice I give to my clients all the time to let go and be present in your moment.”