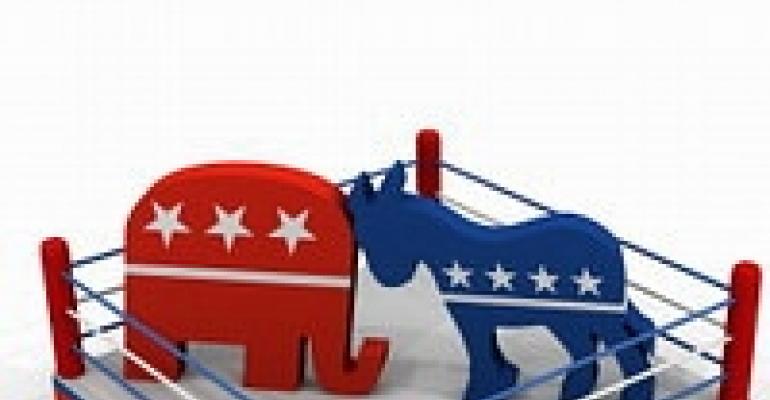 The U.S. presidential election is still three months away, but two far bigger events--at least in terms of special events--are coming up quickly. The Democratic National Convention comes to Denver Aug. 25-28, followed by the Republican National Convention Sept. 1-4 in Minneapolis-St. Paul. And for event professionals, presidential conventions are truly big business. They bring a landslide of bashes, from those for the political committees themselves to events hosted by corporations and nonprofits. Notes Charlie Feldbaum, head of Edina, Minn.-based Apres Party Rentals, "We have been told by other cities that this will be the biggest event we ever do, next to the Olympics."

FROM STADIUM TO SUITE

Many in the Denver event community are already hard at work. Epicurean Culinary Group, based in Centennial, Colo., has 57 events on the books specifically for convention week, notes chief operating officer Greg Karl. The company's Epicurean Catering arm is handling 35 projects, the largest of which will be a 15,000-guest event for media from throughout the world. The Epicurean Entertainment arm is catering 10 events at Invesco Field at Mile High stadium, where the Denver Broncos football team plays, while Epicurean @ DCPA is catering nine events at the Denver Center for the Performing Arts. For Sen. Barack Obama's Aug. 28 acceptance speech at Mile High, 45 years to the day since Martin Luther King Jr.'s landmark "I Have a Dream" speech, the company will cater 140 executive suites on site.

The company's clients include the Democratic National Committee, state delegations, law firms, corporate clients and nonprofits, Karl says. The business came in part from the local host committee's Web site, which lists its preferred vendors. "Some of our clients found us through the venues we work in," Karl adds, "and our development team also did a great job of landing much of the business."

The DNC has promoted the convention as a "green" event and has issued strict guidelines for caterers, advising them to make "every effort" to ensure that each plate contains 70 percent organic food and 50 percent fruits and vegetables. The produce should include at least three of the five colors red, green, yellow, purple/blue and white. Fried food is a no-no.

These guidelines have been mocked in the press, but Syd Sexton of Denver-based Syd Sexton Event Productions says her company has its own green initiatives anyway, and the convention's business is worth the work. "We expect to exceed the business of our busiest month ever in this one week with gross receipts of $1.5 million," she says. "At this point we have 60 parties booked and are still taking more." Her clients include MSNBC, the Congressional Black Caucus and the American Israel Public Affairs Committee, as well as large corporate clients and fundraisers. Most of her events will run from 9 a.m. till midnight, after the delegate sessions end, though the biggest night will be Sunday before the convention kicks off, she notes.

VOTE NO ON FORKS

Besides the "green" focus, convention events must meet certain ethics guidelines. "There is a crazy ethics rule requiring that all hors d'oeuvre be eaten by finger or toothpick--no forks--so as not to appear that the party hosts are feeding the attendees a dinner," Sexton says. "This certainly presents a challenge for action stations--not a lot of pasta being served at these parties."

Denver-based technical support company Fastlane Productions has a "handful" of events booked during the convention, notes president Doug Lane, "but new calls are coming in every day." He adds, "Last week, the phone began ringing for new projects. This event is following the normal pattern of last-minute bookings in our industry."

Although the Republicans' confab tails the Democrats' by a scant three days, the event community in Minneapolis-St. Paul is still waiting for those last-minute bookings.

"We have been gearing up for over a year, and we have had many inquiries," notes Feldbaum. Apres updated its Web site to show it is "RNC-friendly," he says, and has stayed in close contact with local hotels, venues and caterers. Yet, "We have lots of bids out there, some with signatures and money, but so little compared to what is about to come," he notes. "We were warned by other rental companies that our business will come in last minute, and we will have to charge top dollar to even secure the rentals."

The situation is tough because the end of August and the month of September are "huge" in his market, Feldbaum notes. "The RNC committee themselves seem to be so overwhelmed with so many details that planning the parties are last on their list." So, "We are booking our regular customers and if and when RNC customers call, we will get inventory from other parts of the country," he says, "and they will pay!"

His sentiment is shared in the market. Judy Elias, with Minneapolis-based foodservice equipment supplier CaterRent, notes her company is providing multiple kitchen setups in tents, St. Paul's Xcel Energy Center--site of the convention itself--and various venues. Even so, "There is a great unknown," she says. "There are still a lot of venues waiting for bookings. There are still people who have yet to plan their events. The next four weeks should prove to be challenging and interesting."

"Everyone is complaining about the same thing: Lots of business potential," Feldbaum says, "but few have signed on the dotted line.”