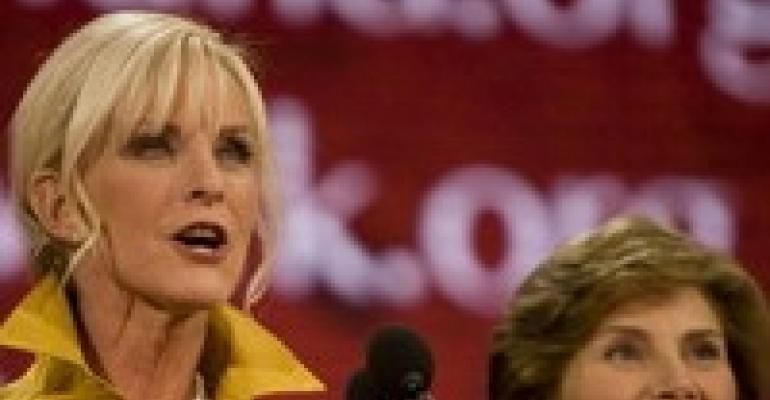 The threat of Hurricane Gustav on the Gulf Coast put the damper on appearances by some politicians at the Republican National Convention, but the party pace continues unabated, event pros tell Special Events. The convention runs Sep. 1-4 in Minneapolis-St. Paul.

Minneapolis-based Twin City Celebrations lost only one event--a party for the Congressional Black Caucus--which was postponed until October. "Many of the congressmen and [congress]women were detained due to the hurricanes, choosing to stay within their home states to assist with relief efforts," notes Joy Devous-Baker, event consultant with the company. "This was the only event canceled due to Mother Nature. We have been very fortunate to have all other events booked for the RNC continue per the client's request. Our staff at Twin City Catering has been working nonstop around the clock to ensure our commitments are met and all our clients are well-fed and happy!"

Other than a greatly abbreviated general session on Monday, "The events outside the [Xcel Energy Center] convention center went on, but with a somewhat different agenda and theme," notes Charlie Feldbaum, head of Edina, Minn.-based Apres Party and Tent Rental. Apres has seen no change in its roster of events. "Anything that had entertainment went on as scheduled," he adds. "The events all tried to bring in another theme as to ways to donate to Gustav."

FROM "PARTY" TO "BENEFIT"

For independent planner Ryan Hanson, founder of Minneapolis-based BeEvents, this meant his Monday "party"--which at first the sponsor considering canceling--was then refashioned as a "benefit" for the Red Cross. Also, the abbreviated official schedule had his event team moving the start of the event from its original 10 p.m. up to 8 p.m. The changes actually helped the event, Hanson says, as conventioneers with little else to do showed up, adding another 400 guests to the bash.

Feldbaum admits to some qualms as the news of the approaching storm dominated the headlines. "We all wondered as the weekend progressed what was going to happen and what was going to be canceled," he says. "That is why I told my staff that every event must be prepaid. Even if they did cancel, the rentals were already in place and would have to be paid for."

Craig Oliver, general manager with Aarcee Party and Tent Rental in St. Louis Park, Minn., says all his events have gone on as scheduled. "I have heard that the restaurants are not as busy as they had hoped," he notes. "That, of course, can change."