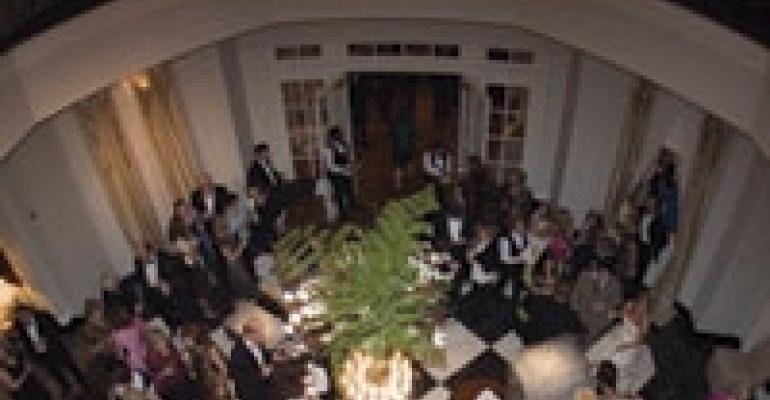 During economic downturns, people tend to travel less and support local businesses more — which is good news for private clubs. Clubs are counting on the loyalty of their members — many of whom go back three generations — to keep business booming and event spaces booked. “Our members continue to support the club's facilities since it is the nucleus of the community,” says Scott Harmon, catering sales director at Greensboro, N.C.-based Greensboro Country Club. In return, clubs provide their loyal members with the same high-quality experience that they've always enjoyed, curbing costs by getting creative.

The party must go on — just not as extravagantly, Harmon says. To cut costs, “Members are selecting more modest-priced menus, less decor and having fewer guests per event,” he says. “We are seeing a normal flow of business, just on a smaller scale.” He notes that members are now taking advantage of the club's complimentary linen and votive candles versus bringing in outside vendors.

Although Harmon says that the Greensboro Country Club is actually thriving in these hard economic times — a trend he attributes in part to “members staying closer to home” — he and his staff are looking for ways to cut unnecessary spending. The team changed its monthly newsletter to a bimonthly publication, which saves the club more than $26,000 per year, he says. Harmon's team has also increased its marketing efforts, primarily through the club's Web site and targeted e-mail blasts. After each event, a club staffer calls members to personally thank them for their business. “It is imperative that we show gratitude to our members,” Harmon says. “Customer service is an important survival tool in these times.”

For most of 2008, business was up from the prior year, says Chris Swinn, owner and general manager of the Atlanta-based Peachtree Club. That trend came to a screeching halt in November, especially in the corporate market, Swinn notes. Several large parties were cancelled in December, but with the amount that the club already had in nonrefundable deposits, it was able to hold on to all of its major weekend parties. “Covering ourselves by obtaining a deposit of over 50 percent 60 days out was key,” he explains.

In order to cut costs, Swinn is relying more on his full-time staff rather than bringing in hourly employees. “Being a smaller club with a very intimate staff, we are able to work together and focus on providing the best quality service without spending unnecessarily,” he says. His team has gone down to a four-day workweek; he has also decreased the number of vendors he uses so that the ones he patronizes will charge a better price.

Even little changes count. The Peachtree Club is now using long-lasting orchids as centerpieces as opposed to fresh-cut roses; the club has also exchanged some of its floral arrangements for hardy plants.

The Peachtree is also looking to “get our name out there” without spending advertising dollars, Swinn says. “We are participating as much as possible in networking events,” he explains, “submitting entries for the [ISES Greater Atlanta Chapter] Allie Awards, and writing articles for blogs and magazines,” he says.

The St. Charles, Ill.-based target="_blank">St. Charles Country Club isn't pinching many pennies due to the recession; in fact, it is in the process of club-wide renovations. Greg Johnson, pub manager, credits the club's sales-savvy general manager for helping the property thrive. “He knows how to go fishing for business; he's great at booking outside parties,” Johnson says.

Johnson also notices that even though the club is losing some of its older members due to the economy, younger ones who tend to be “higher spenders,” he says, are joining. While the club is already receiving wedding bookings for its new ballroom, which is due to open in April, Johnson says he is seeing a downturn in baby and wedding showers, which members may view as a “luxury event they can do at home.”

The club is implementing food and drink specials to make events more cost-effective for members, and Johnson has noticed that guests are “cutting a little bit off the top of everything — they'll order chicken wings instead of the shrimp cocktail now,” he says.

Johnson says it's important that clubs maintain quality. “Why would people come to a country club if the food isn't any better than what they could get on the street?” he asks.

Personal attention is the key to a private club's success during tough economic times, says Kelley Stefka, catering director for the Greer, S.C.-based Thornblade Club. “We take pride in knowing every member and their families and guests, if possible,” she says. Although the club has seen a small decrease in events over the past few months, Stefka and her staff have been proactive in helping members find cost-effective uses for the club, which she says is an “all-in-one operation.”

To encourage members to “go local” when choosing an event venue, the club created a “Use Your Club” campaign. “We want them to come here before thinking of going anywhere else — we are a family taking care of our family,” Stefka says. l

The Method of Modern Clubs