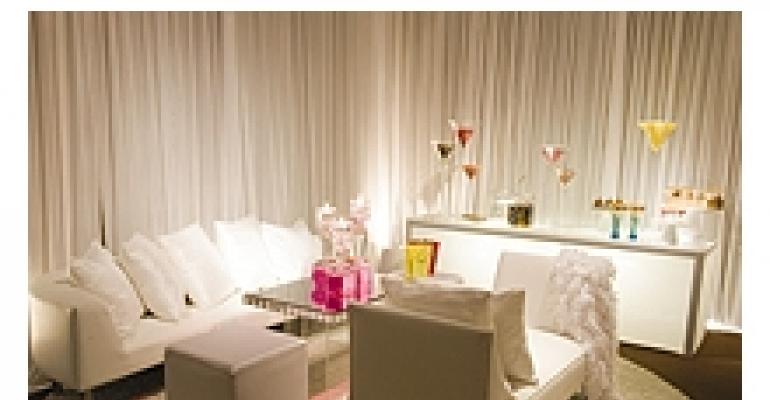 The Real World Of Sweet 16s

TELEVISION shows such as MTV's “My Super Sweet 16” depict spoiled 16-year-olds with birthday parties grander than many wedding receptions. In fact, Sweet 16 celebrations can be a sweet business, according to many event planners — but good luck finding many clients.

Solomon Rosenzweig, president of San Francisco's DaVinci Fusion, says Sweet 16s “are quite overhyped by the media, mainly because the shows featuring them are so inexpensive to produce.” Ira Mitchell-Steiman, creative director of Pembroke Park, Fla.-based ME Productions, goes one step further, saying, “I almost think {the media} is trying to create them.”

Yet, creative manager Sarah Finlayson of Chicago's Blue Plate offers a different opinion. She “definitely agrees that aspects of these parties have a significant presence.” Offering delivery pizza and renting movies for teenage parties “just doesn't cut it anymore.” However, she adds, Blue Plate's work on teen parties shows “only one aspect {of the party is} blown out of proportion — entertainment, food or decor,” Finlayson says, “not all factors, such as {the honoree} being carried in, having A-list entertainment and serving extravagant food, as seen on MTV.”

Regional preferences for Sweet 16 parties also come into play. As Atlanta-based Bold American Catering's director of sales Stacy Zeigler notes, “They don't seem to be a Southern thing.” Finlayson says there's a reason for their popularity in only certain parts of the country. “New York and Los Angeles see a lot of requests for over-the-top parties due to the close proximity to the celebrity world,” she explains. “However, influences are popping up in the Midwest, especially in Chicago's suburbs where many affluent corporate parents reside.” Mitchell-Steiman adds to this by citing an event planner friend in Kansas City, Kan., who “does Sweet 16s all year-round, but very few bar and bat mitzvahs,” the latter a far more significant business in Mitchell-Steiman's Florida.

Perhaps most telling is the fact that all respondents — located in Illinois, Florida, Georgia and California — cite Sweet 16s as a mere 1 percent or less of their business.

Mitchell-Steiman says the nightclub theme is popular for the Sweet 16s he has produced as well. For one event, ME created a sleek white lounge: “The entire thing was draped in white and carpeted in white,” Mitchell-Steiman says, “and all the tables were white with all-white high-end leather furniture.” He also notes the popularity of medieval themes. One party transformed a ballroom into a castle: “We had a drawbridge with a moat,” he explains. “Knights were everywhere.”

Zeigler's client — also featured on the MTV show — opted for something altogether different: an old sugar mill venue. “It was a little rustic: open wood-beam ceilings, hardwood floors,” Zeigler explains. “She had a Shakespeare theme, so she was brought in by jesters.” Despite the extravagance, Zeigler — who has worked with non-televised Sweet 16s as well — notes, “We made more money on the regular one than the MTV one.”

While many question how widespread Sweet 16s really are, most planners also say the events' depiction on TV isn't entirely accurate. Many scoff at TV's portrait of bratty teens. Mitchell-Steiman says of his teenaged clients: “The 16-year-olds have all had fair temperaments.” Zeigler, too, notes the graciousness of the celebrant she worked with for MTV's show: “The girl was actually really sweet and was just excited her parents were throwing her a big party.”

In addition, many note the gap between what aired on TV and what really happened at the party. One example Zeigler cites is the BMW X5 gifted to the girl on the MTV program, which Zeigler says “was just for the show. She really got a Honda or a Toyota.” Rosenzweig says that MTV's involvement in DaVinci Fusion's party turned the simple task of booking entertainment “into full-blown casting sessions and auditions to make for compelling television.”

Despite the televised Sweet 16 extravaganzas, the real blockbuster teen parties typically honor younger children. “Bar and bat mitzvah are the real children's parties that we're having,” Zeigler says. Mitchell-Steiman agrees. “It's a known fact that in a Jewish family, there's going to be a bar mitzvah when a young man reaches 13,” he says. “And there will be a party — they can easily exceed $50,000 in decor alone.” In fact, he notes that many event planners stay in touch with local synagogues since bar and bat mitzvahs are such established celebrations. Mitchell-Steiman has even encountered a “faux mitzvah” that a mother from a Christian background threw for her 13-year-old. “The young girl had been to all the bar and bat mitzvahs of everyone else in her class, so her parents threw her a very expensive birthday party, done in the same extravagant style of a floral bat mitzvah,” he says. “She had huge towering centerpieces at $500 apiece, then she had extravagant linens and wonderful entertainment, but it was not for 16 — it was for 13.”

Bar and bat mitzvahs — as well as the quinceanera, which some planners do a decent business in — have cultural ties that keep these celebrations going strong. In addition, according to Mitchell-Steiman, if parents throw an elaborate religious coming-of-age party for a young teenager, they are less likely to turn around and throw another party when the child reaches 16. Another piece of competition for the Sweet 16 party: “Parents here are making deals with their 16-year-old girls to buy them cars when they're 17 instead of giving them huge Sweet 16 parties,” he says.

Will the trend of hosting Sweet 16 parties outlast the run of MTV's show? Event planners don't agree. “People will throw them forever,” Rosenzweig says. Mitchell-Steiman hopes so — he welcomes Sweet 16 business since “at 16, the young lady has more taste, personality and style sense than she had when she was 13.”

But others doubt it. “The craze will slowly fade and parties will become simple again,” Finlayson says. Zeigler is even more blunt: “I think they're just a blip on the radar screen.”