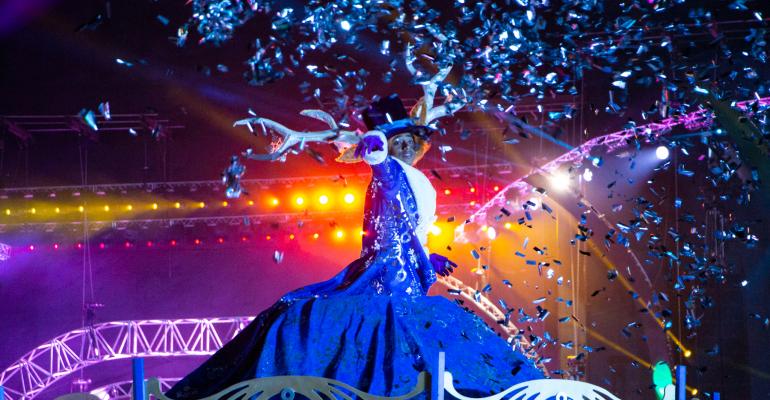 Start Slideshow ›
BWS KSA, the Saudi Arabian branch of Balich Wonder Studio, kicked off the 2021 Riyadh season in October with an opening parade that drew 750,000 spectators.

Ever year, for nearly six months, the capital of Saudi Arabia, Riyadh, becomes a festival to rival all others with an extensive calendar of over 1,000 events, including concerts, theater performances, and food, all in celebration of the entire nation. The Riyadh Season, unified under the theme of “Imagine More,” kicked off this past October with an opening parade, orchestrated by BWS KSA, the Saudi Arabian branch of Balich Wonder Studio.

This year’s spectacular opening parade, enlivened by hundreds of performers, kicked off the long list of the Season’s events, and is intended to represent all the main attractions that will take place in the city’s different districts. Some of this year’s highlights included a “flying” man, 2,760 drones, special water effects, fireworks, and lights.

The Riyadh Season is orchestrated by the General Entertainment Authority.

The parade was especially important for the entire world entertainment sector since it was the largest show produced for a live audience following the long hiatus due to the COVID-19 pandemic. The event used the latest technologies to guarantee that the show, which was enjoyed by over 750,000 people in-person, could also be enjoyed by the millions of spectators who followed the show via TV, websites, and social networks.

“We are delighted to have been able to continue to give life to this long-running dream. In order to create the opening parade of the new season we were asked to go even further and we followed the official motto ‘Imagine More’ in doing so. We worked closely with Sela Sport and the General Entertainment Authority to create an event that thanks to a highly memorable show, faithfully represents the grandeur of this new season, one which will be full of surprises and numerous activities presenting the best of local and international excellence” according to BWS-KSA.