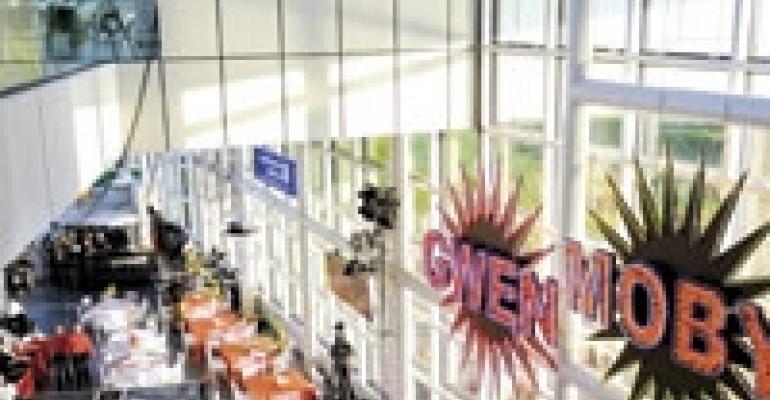 The bride and groom made their wedding plans clear. “They said, ‘We don't want a traditional wedding; we want a blast,’” recounts Joe Mineo, president and chief creative director of Canfield, Ohio-based Something New Events. To fulfill their request, the Something New team took the rockin' wedding venue — Cleveland's iconic, I.M. Pei-designed Rock and Roll Hall of Fame and Museum — and turned up the volume. The result: a September event for 400 that totally rocked.

Although the museum displays guitars rather than Gauguins, the rules that govern private events at cultural institutions stayed the same. In order to preserve public access, venue management prohibited the event team from loading in till the museum closed at 4 p.m., a scant 2 1/2 hours before the wedding began. Even then, the event team had to share one elevator with the rental company and caterer. The caterer had to improvise as well, setting up a temporary kitchen in an entryway, the only space available.

The Something New team wound up conducting its rehearsal in its own studio, making the wedding reception itself the only time the performers could work in the space. “Putting on an event is like putting on a Broadway show,” Mineo says. “You just pray there aren't any last-minute glitches.”

The performers rose to the occasion. Local rock bands played on the venue's main floor, summoning guests to the dance floors on all three museum levels. “It was almost like there were three different parties going on at once,” Mineo says. Gold-painted living statues of superstars Madonna and Elvis Presley greeted guests, who could also consult roving psychics.

The event team amped up the museum's array of artifacts from iconic acts ranging from the Who to U2 with a decor package that included chic lounge areas with red, white and orange couches flanked by white end tables and glowing coffee tables. Centerpieces featured vinyl records, and red lampshades sported guitar silhouettes. Color-changing LED lights kept the beat going, and robotic lighting fixtures quickened the pulse on the dance floor.

A roving cameraman captured the action on each floor; a live feed aired on a large screen on the venue's ground floor. “This added to the overall excitement and urgency of the event,” Mineo notes.

The end result of an event with a rocky start? “A wedding that was elegant,” Mineo says, “in the coolest way possible.”