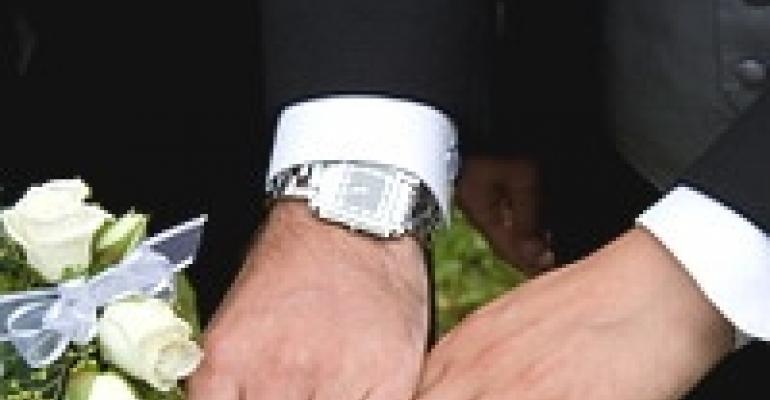 Many California special event professionals who serve the social market predict a boost in wedding business this year in light of the state Supreme Court's ruling last month that same-sex couples can wed in the Golden State. Although a few specially arranged ceremonies took place Monday, yesterday marked the official start of the wedding rush as county offices began issuing wedding licenses.

San Diego-based TK&A Custom Catering has seen a "100 percent increase" in recent weeks in calls from same-sex couples looking into wedding receptions, notes CEO Lisa Richards. "We just got a call from a gay couple who led the legislation to do their wedding" this summer, she adds. "It will be a landmark wedding."

Joann Roth-Oseary, founder of Tarzana, Calif.-based Someone's in the Kitchen, expects another $200,000 to $400,000 in additional revenue this year from same-sex weddings. "We already have several that are booked, and we are marketing to the community strongly," she says. "It is a very joyful time for so many couples who have been denied an experience they felt belonged to them."

The Fairmont Sonoma Mission Inn & Spa in Sonoma, Calif., predicts a 5 percent to 10 percent boost in business in light of the ruling, according to weddings and catering manager Kelly McLeskey. The property has received "numerous calls" since same-sex marriage was upheld, and has booked two such weddings for later this summer, says Fairmont spokesperson Michelle Heston.

Some event pros believe that the rush of weddings now is only the first blush of business. Newark, Calif., wedding planner Gwen Helbush of Where to Start predicts a 2 percent to 3 percent increase in business this year, but from 10 percent to 15 percent in 2009. "Many of the couples who are marrying now have celebrated their commitment previously and are simply making it legal," she says. "I think the real surge will come when all the hoopla dies down and the couples who just want to have beautiful private weddings without being on display will start calling."

The Williams Institute, a think tank at UCLA School of Law studying sexual orientation and public policy, released a study earlier this month predicting $683.6 million in revenue for California thanks to spending by resident same-sex couples on weddings and by out-of-state couples on tourism and their weddings. To download the study, click here.

GOING FOR THE GAY CLIENT

Some event professionals are actively pursuing the same-sex marriage market.

The Fairmont San Francisco has just debuted its "Love is Proud" wedding and honeymoon packages. The hotel will donate 10 percent of revenue from same-sex weddings at the property to the Academy of Friends, a local organization benefiting AIDS/HIV charities in the Bay Area.

Sister property the Fairmont Sonoma Mission Inn is going one step further. The hotel is not only riding the same-sex wedding trend but going green, too. Its "Green and Gay" program offers environmentally friendly same-sex weddings that include options such as invitations printed on recycled paper using soy inks, menus featuring local organic food and guest transportation via hybrid vehicles.

For couples who want to get married fast, Los Angeles-based Citrus at Social claims to be able to put on a reception with as little as three hours' notice. Director of special events and catering Melissa Darpino says, "I was living in San Francisco during the first wave of same-sex marriages [in 2004] and remember ushering people into City Hall and then right off again to their great reception meal. Now I am at Citrus at Social in Michel Richard’s inspirational kitchen and can offer all couples a wedding night to be remembered.” The property has already booked two same-sex weddings.

The same-sex wedding industry is moving mainstream. Veteran Los Angeles caterer/planner Randy Fuhrman of Randy Fuhrman Events says he is producing what he dubs the "first Gay Wedding Expo" in July in Los Angeles for the Rainbow Wedding Network.

Some event pros believe that despite the media splash, their business involving same-sex celebrations won't change much.

"We've seen more requests from same-sex couples in the past few months," notes Sheldon Sloan, partner and sales director with South San Francisco-based Melons Catering and Events. However, "I think in San Francisco, many same-sex couples have for the past decade been hosting commitment celebrations regularly." Though he expects "a few more than usual, I don't anticipate a huge increase" in same-sex weddings, he says.

San Francisco-based McCall Associates will create a high-profile same-sex wedding party later this summer for San Francisco Convention and Visitors Bureau CEO Joe D'Alessandro and his partner at the soon-to-reopen Maritime Museum. Even so, "Commitment parties have been going on for a long time," notes founder Dan McCall, "and I am not sure there will be any more 'official' celebrations over the number of serious commitment parties that we have catered in the past." He estimates his business will see a 10 percent boost in the number of same-sex celebrations.

Family-friendly institution the Walt Disney Co. has been ahead of the curve since last April, when it opened its Fairy Tale Weddings program to same-sex couples. Up to that point, the events had been available only to couples who could provide a marriage license.

The marriage mood in California could sour if backers of a ballot initiative banning same-sex unions get their way. A coalition of religious and conservative activists submitted 1.1 million signatures to qualify a constitutional amendment that would limit marriage only to heterosexual unions. Californians go to the polls Nov. 4 to vote on the measure.

Caterer Kai Loebach, founder of Los Angeles-based KWL Designs, notes that two of the same-sex wedding receptions he had on the books have canceled. "Many think the [same-sex] ruling will be revoked," he says.

"I think we will know for sure in November and people will be more confident," notes Mathew Baker, president of San Diego-based Feast on This. Looking at same-sex commitment parties compared with weddings, "I really think in the gay community, it will be more a 50-50," he says. "Most will want commitment only, others will want weddings, and we won't start seeing it happening till at least a year from now."