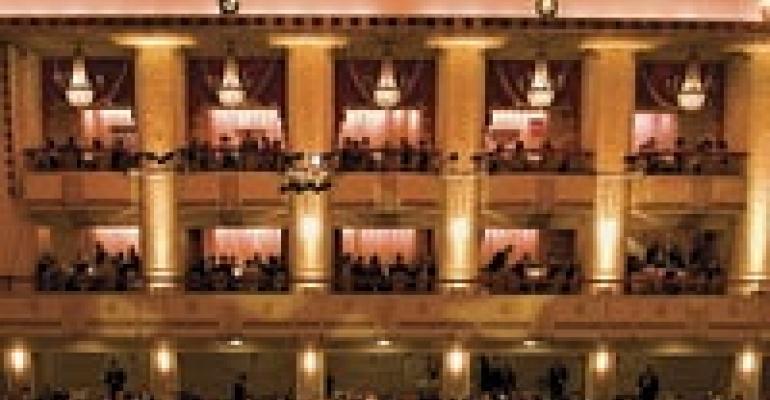 They conquered L.A, so it was New York next. Los Angeles-based Sequoia Productions has been the talent behind the West Coast rendition of the annual “G'Day USA: Australia Week” gala since its 2004 inception. But the team had never worked on the celebration's New York counterpart — until this year. Called in by the Australia Week committee to raise the bar on the Jan. 23 New York bash, according to Sequoia vice president Gary Levitt, Sequoia headed east, its creative ingenuity and budget-allocation expertise in tow. It was no easy task, particularly since Australia Week occurs during one of the busiest times of the year for Sequoia, the longtime producer of the Academy Awards Governors Ball.

SEE AND BE SEEN

Brought on to the project only after its client had selected New York's opulent Waldorf-Astoria hotel as the gala's site, Levitt and his team encountered challenges from the get-go.

First off was a razor-thin load-in window. Selected by the event committee head — former Australia Consul General John Olsen — for its historic status and the classic elegance of its famed ballroom, the Waldorf had a separate event for a different client booked in the time slot directly before the gala. That meant a scant two-hour event-prep for Sequoia and its vendors. As a result, “We kind of worked backwards,” Levitt says. “It was very helpful for us that the hotel's in-house lighting and AV company was working on both projects.” As a result, he explains, Sequoia was able to piggyback on installations for the earlier event, such as pin-spots, and pre-rig much of the equipment the day before the gala.

Sponsor branding posed another challenge. According to Levitt, sponsor Jacob's Creek winery “felt they didn't get presence value” at last year's event. This year, Sequoia worked in tandem with the sponsor to design centerpieces that placed a central focus on the winery's brand. The arrangements featured bottles of Jacob's Creek wine “nestled in vine branches and cymbidium orchids,” Levitt recounts, which transformed the sponsor's product into a thematic design element.

Along with logistics and design, celebrity access saddled Sequoia with a major challenge. With so many VIPs representing event host organizations the Australian Consulate General in New York and the American Australia Association, direct contact with event honoree, film director Baz Luhrmann, and presenter, superstar Nicole Kidman, was at a premium. To maximize VIP face-time and eliminate the typical — but often awkward and time-consuming — circulating “meet and greet,” Sequoia instead set up a long rectangular table perpendicular to the entertainment stage, “almost like the head table at a wedding,” Levitt says. The intimate, narrow table — “something we've never done before,” notes the producer — allowed 30 high-profile guests to dine with the celebs for the duration, ensuring that all who wanted to felt they had “a piece of the action.”

While the global economic crisis meant budget cuts for the international event, Levitt and team still had to satisfy the client's demand for an “exceptional” guest experience.

Levitt says he made the most of limited funds by allocating effectively. “My expenses in New York were more labor than ‘fluff,’” he notes, explaining that he actually increased spending on labor over last year's outlay in order to ensure that whatever equipment or products were installed were done so with the highest level of professionalism.

Levitt exercised restraint in other areas as well. For the entertainment, “If we could do three cameras instead of four, we did,” he says. “Instead of HD, we did regular [resolution].”

Guests, however, had no inkling of the cost-saving measures, indulging as they did in a lavish dinner of Australian-sourced specialties including barramundi tartare and braised lamb, prepared by renowned Australian chef Luke Mangan.

A tablescape palette of rich jewel tones — dominated by gold in the event's Diamond section and deep red in the Ruby section, both on the ballroom's floor level, along with shades of green in the upper-level Emerald section — added to the feeling of opulence without adding excessive cost.

For Levitt, Sequoia president Cheryl Cecchetto and the firm's staff, the first time working on the New York gala was a charm.

Not only did the event “surpass expectations” for the client, Levitt says, but the vitally important returning title sponsor, Jacob's Creek, “was very happy and felt their product was well showcased and well received,” he adds.

Still, says Levitt, in the future he likely would voice his preference for being involved in site selection. “The two-hour load-in was very challenging,” the producer says. “We would make sure in the future that the location of any event that has an entertainment component as part of the event has a load-in schedule that allows a rehearsal and sound check in the space.”

And, since Levitt says Sequoia “is happy to help with New York on an ongoing basis” following the success of the 2009 event, he may just have to insist after all.

Floralia Decorators at the Waldorf-Astoria
212/759-6910
www.floraliadecorators.com

A TASTE OF OZ