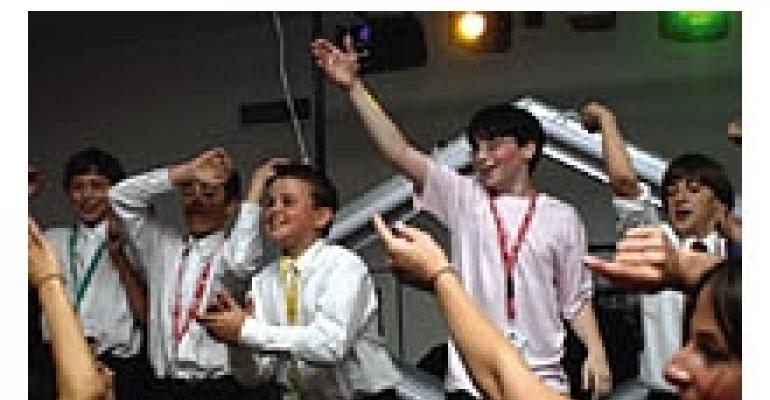 Setting The Bar High (And Low)

Some bar and bat mitzvahs mark the occasion with an expensive bash while others party it up but keep costs down. Here, event pros explore the pressure behind rising prices and share tricks to stretch budgets for the Jewish coming-of-age ceremony.

All bar and bat mitzvahs — regardless of cost — need stylish decor for that perfect party atmosphere. Robert Fountain, president of San Francisco-based Robert Fountain, points out that bar and bat mitzvahs traditionally depend on decor to make a statement. “Mitzvahs have always been a dramatic event,” he says. “It's about creating a look and an environment, and you can't do that with just a centerpiece and a tablecloth.”

The bashes with bigger budgets — often roughly $1,000 a person — take decor to dazzling new levels. Samantha Goldberg of Chester, N.J.-based Gold Events & Co. recalls a bat mitzvah with an under-the-sea theme. “It was definitely over a Harvard graduate's tuition — well into the six figures,” she says.

For a bat mitzvah with a budget of roughly $300 per guest at the Mason Murer Art Gallery in Atlanta, Bold American Catering used color for a big decor statement. The Atlanta-based event team used a palette of bright pink and orange hues for a fun, feminine look. Tables popped thanks to vivid linen with a texture similar to shag carpeting; a pink and orange mosaic on the tabletops spelled out the mitzvah girl's name.

The area appointed to hold bar or bat mitzvah festivities helps determine the event's price tag — and venues vary from fixer-upper to prepped-to-party. Fountain used San Francisco's Glass Palace — a former industrial site featuring huge windows — for a big-budget celebration with a fairy-tale forest theme. Overlooking landmarks such as the Golden Gate Bridge, the venue had potential but “we had to bring in everything,” Fountain says, including restrooms, lighting and sound.

On the other hand, some venues are kind to planners on a tight budget. For a bar mitzvah keying on the theme “New York, New York” at the Morris Museum in Morristown, N.J., Goldberg decorated the galleries to support the big-city premise: Guests explored rooms themed to Broadway, gourmet food store Dean & Deluca, and Chinatown. In the carnivore exhibit area, carving stations shared space with the museum's stuffed bear exhibits. Because the client focused on spending responsibly, the venue fit the bill. “At a museum, not as much decor is necessary,” Goldberg notes. But there was more to this mitzvah than money issues. “The mother of the bar mitzvah boy worked at a temple, and she really wanted her son to understand what [the bar mitzvah] was all about,” Goldberg says.

All mitzvahs have a similar focus, no matter the money spent. Increasingly, a bar or bat mitzvah child's wishes are the focal point of the fête, espe-cially in the last five years. “Sometimes, it's just a matter of principle,” Monique Joyce of Bold American explains. “[Clients] want to keep the focus of the event on the child and the milestone they have achieved.”

Universal Studios in Los Angeles can make the dreams of star-struck children come true. Here, bar and bat mitzvah celebrations might include a tram tour of the studios' back lot through movie and TV sets for “Psycho,” “War of the Worlds,” “Jurassic Park” and “Desperate Housewives.” “In advance, we get some fun facts about the guest of honor and his or her friends,” Scott Ackerman, director of catering at Universal Studios, explains. “Then we work it into the tour and play a trivia game to keep the kids involved.”

One high-end bar mitzvah at Universal Studios was tailored to the bar mitzvah boy's love of music. The event team, including Cindy Symans-Hassel, president of Tarzana, Calif.-based S&R Originals, lined up a doo-wop group to entertain during cocktails, and USC's marching band led guests from the reception to the dining area. The mitzvah boy made his entrance accompanied by a 15-member gospel choir. Other musical notes included an ice carving of a classic guitar and the honoree's face on oversized covers of famous record albums. “The clients wanted to make it about what their kid was interested in, and his passion was music,” Ackerman says.

Sometimes it doesn't matter to event pros if clients take the high- or low-budget road. “You can stretch creatively when you don't have the pressure of a [limited] budget,” Symans-Hassel says. “On the opposite end, there is something very fulfilling about making something out of nothing.”

TOO MUCH BAR, NOT ENOUGH MITZVAH?

Event experts share their thoughts on what drives up the cost of bar and bat mitzvah celebrations.

Cindy Symans-Hassel of S&R Originals/SRO Events: “Many families get on the bar and bat mitzvah ‘circuit’ the year their child turns 13, and each party has to be different or they are boring. ‘Quality’ and ‘interesting’ can often translate to ‘custom’ and ‘costly.’”

Samantha Goldberg of Gold Events & Co.: “It really does come down to competing with the Joneses: ‘Ours has to be different and better.'”

Robert Fountain: “I think since the media is such a large part of our life — and with MTV everybody is seeing shows like ‘My Super Sweet 16’ — that the kids are wanting that.”

Monique Joyce of Bold American: “I think a large part of it is trying to do something different. It is important to make their own child's important day personal and unique.”