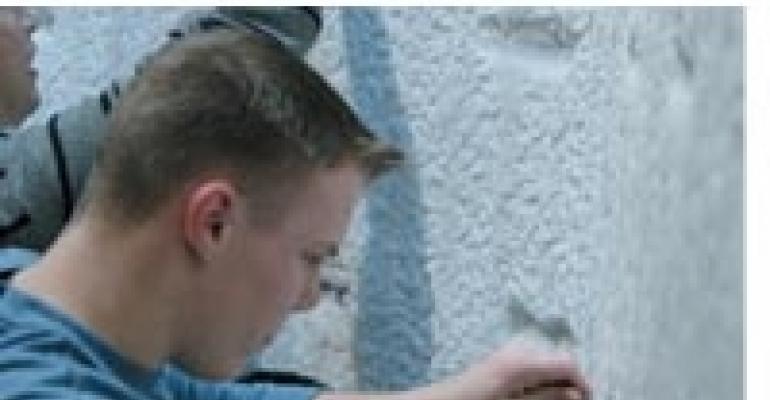 Showstoppers: Booths that Stop Show-goers in Their Tracks

The Mercedes-Benz exhibit at the North American International Auto Show, held in Detroit in January, got a chilly reception. And that's just what the design team at automaker DaimlerChrysler wanted.

Brainstorming on how to salute the 100th anniversary of the company's invention of four-wheel drive — a feature that helps cars navigate slippery roads — the DaimlerChrysler exhibition team joked that they should display a car driving on ice. But then the joke began to sound like a great idea, explains Petra Wagner, part of the brand communications team.

Nine months before the Detroit show, the DaimlerChrysler team began developing the ice rink in its 22,000-square-foot exhibition facility in Stuttgart, Germany, which mimics actual conditions at convention centers. Although the technology behind ice rinks is nothing new — “It's like a big bathtub,” Wagner explains — the exhibition team fine-tuned its rink with touches such as a layer of glass “gravel” for more traction and topping the rink with a special ice “paint” to keep the color a pretty white rather than drab yellow.

During the all-important press conference days at the show — which attracted 6,600 journalists — the 6,500-square-foot ice rink stayed cool. Along with a presentation by DaimlerChrysler's CEO, the rink showcased a ballet of cars, ice hockey players and figure skaters.

Thanks to the months of testing beforehand, the only real surprise at the show came from the 7-foot-tall “ice walls” flanking the rink. Developed with German design firm Kauffmann, Theilig & Partner, the walls — ice-frosted neoprene with steel supports — were studded with 150 decorative plastic replicas of Mercedes-Benz's “4matic” chrome logos. Apparently some of the 700,000 show-goers were so impressed by the booth that they used their own car keys to dig the logos out of the ice as souvenirs. “It took them only a day and a half,” Wagner says dryly.

Charming, chatty and fiercely competitive, realtors play to win. So when San Francisco-based Wells Fargo Home Mortgage set up its exhibit at the National Association of Realtors show in New Orleans in November, the company got into the game. The stakes were high: Realtors are in the position to refer mortgage companies to both clients and colleagues, so one positive impression can come back as millions of dollars in business.

With help from Chicago-based Live Marketing, Wells Fargo used a wide range of tools to touch attendees, from placing 5,200 neon green pillows in hotel rooms to plastering the Wells Fargo logo on shuttle busses and even aisle signs above competitors' booths.

But the hit of the show was the booth's “Realtor Rumble” game. Attendees had to earn tokens to play by having their badges scanned or viewing presentations on Wells Fargo loan programs. In the game, realtors struck a button with a mallet to send “buyer” balls into “home” holes. Not only did players get a kick out of the old-fashioned fun but “lines of attendees waited to play the game as long as the show floor was open,” a spokeswoman says.

Wells Fargo knew it had a winner because the company kept score. Despite the crush of 700 booths competing for the attention of the 23,500 attendees, Wells Fargo's visits more than doubled over the prior year results and leads jumped 17 percent, management reports.

Live Marketing turned into its own client at the Exhibitor show in Las Vegas in March, where 7,200 corporate exhibit and event managers are attendees.

Live Marketing turned the spotlight onto the show-goers, selecting seven of its top clients as “trade show heroes.” These exhibit managers were depicted in cartoon-superhero style in exhibit graphics at the Live Marketing booth, and their life stories were woven into a live presentation.

Live Marketing used a mix of high-tech tools and tried-and-true games to attract attendees. A mobile media promotion broadcast messages to show-goers carrying Bluetooth devices; attendees who chose to opt in received a graphic image with Live Marketing's logo plus the company's booth number and Web address. Those who showed the message at the booth won a gift certificate to Starbucks. Attendees who watched a presentation on the company's capabilities received a “hero” medallion to wear on the show floor; a roving spotter gave out $25 gaming chips to people sporting medallions. Visitors who completed a survey could enter to win a “Trade Show Hero Survival Kit,” a list of essentials neatly packed in a sardine can.

The techniques paid off: Live Marketing generated 16 percent more qualified leads than it aimed for. But just as important as the data collected was the emotional connection made with show-goers. Thanks to the “hero” theme, “attendees said they appreciated Live Marketing's recognition of exhibit managers' work,” a spokeswoman says.

The Licensing International Expo, held in New York last month, means business. Here, more than 23,000 attendees meet to capitalize on the next hot show or character. But when you're there to promote Ming-Ming, the opera diva duckling who rescues pets in peril, you had better keep a kid's-eye perspective on the proceedings.

Jack Morton Worldwide did just that for client Nickelodeon. The child-oriented cable channel has already created breakout cartoon characters including Dora the Explorer and SpongeBob SquarePants. To generate the same buzz for newbies such as Ming-Ming and her fellow Wonder Pets, the exhibit team turned the Nickelodeon booth into a character showcase. A 20-foot LCD screen aired the cartoons accompanied by a live orchestra, echoing the “Wonder Pets” show's sung dialogue.

In a brazen bit of branding, Jack Morton slathered the 8,000-square-foot booth in Nickelodeon's signature “slime,” the green goo that has routinely been dumped on the heads of everyone from small fry to superstars appearing on Nickelodeon shows. The exhibit team kept things clean, however, by using a mixture of fabric and molded pieces.

The “The Trade Show Hero Survival Kit,” handed out in the Live Marketing booth to exhibit managers who completed a survey, included: