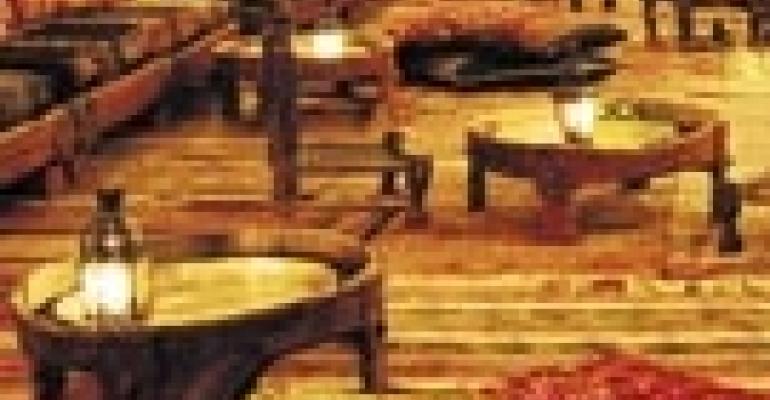 Shark tanks, airplane hangars, wave pools, priceless gems. What do these have in common? All are features of event venues selected as top pics by event planners nationwide in a survey conducted by Corporate Meetings and Incentives Magazine, sister publication to Special Events Magazine. We added results from our own poll to the mix to come up with a revealing look at today's top sites, then talked to on-site experts to get the inside scoop.

The Janet Annenberg Hooker Hall of Geology, Gems and Minerals at the Smithsonian Institution in Washington can accommodate up to 300 guests for standing receptions, or can be used in conjunction with the museum's rotunda for larger groups, according to manager of special events Ted Anderson. Smaller groups may opt for an intimate dinner in the hall's Harry Winston Gallery — home of the Hope Diamond, the world's largest blue diamond and a treasure Anderson calls “the most sought-after museum object in the world.”

Another East Coast institution, the Baltimore Museum of Industry, features a few gems of its own: historical exhibits, a great view and parking — lots of it. “The one thing we have that outweighs all the other benefits, especially for local groups, is a 150-space off-street parking lot. It's very rare so close to downtown Baltimore,” says Jason Hoffman, event coordinator for the harborside venue. “The area where the events take place is a self-guided exhibit space,” he says, adding that the indoor-outdoor facility includes a wall of industry milestones achieved in Baltimore, including the nation's first gas lighting and first railroad.

Steven Thompson, director of catering for the Hotel Inter-Continental in Chicago, says the property's unique layout — about 40,000 square feet of event space broken up into many different rooms — gives events there an intimate feel. “It's very self-contained,” he says, adding, “The fact that you have that type on feeling right on Michigan Avenue is really nice.”

The Inter-Continental's many event rooms, located on four distinct levels, aren't standard hotel meeting spaces, either. These are rooms with names like King Arthur Court, the Camelot Room and the Empire Room — and opulent decor to match, including carved wood pillars, cast iron chandeliers and stained glass walls.

According to Babilino, the beach area, complete with outdoor stage, is popular for large corporate events with entertainment. A particularly memorable bash: “Mercedes did an exceptional event on the beach here. They had this incredible show at the wave pool, which was like a Cirque du Soleil on the water.”

GETTING UNDER IT ALL

Located 25 feet below ground in Las Vegas, the subterranean mansion called The Underground House may be accessed only by elevator or stairs from the building above. “We don't give guests any information, we just get them loaded into limos or mini-buses and take them over to the venue. When I have staff loading people at the hotels, the guests will have money in hand trying to bribe my people, saying ‘Where are we going?’” says Karen Gordon, president of Activity Planners, the exclusive event producer for the unique venue. Once guests descend into the 16,000-square-foot mansion, which offers landscape murals and “priceless antiques,” Gordon and her staff present cocktails and tours of the home which was created by an eccentric entrepreneur and featured in the 1964 World's Fair.

An undersea experience is the distinctive feature of the Audubon Aquarium of the Americas in New Orleans. With its indoor and outdoor facilities, the aquarium is an ideal place to impress guests from local conventions with welcome and farewell parties, according to Richard Buschbaum, CPCE, vice president of food, beverage and catering sales for the aquarium's parent organization, the Audubon Nature Institute.

In addition to exhibits of Caribbean fish, Amazon wildlife, sharks, jellyfish and a rare white alligator, the aquarium offers full on-site event services, although off-premise caterers are welcome for parties of up to 1,000 guests. “We do different off-site events during the conventions, and we work tremendously with the DMCs,” Buschbaum says. “They are a huge element of success for the aquarium because they touch the clients before any of us here do.”

“There is definitely a spiritual pull here at this property,” says Hawaii's Mauna Lani Resort director of catering/conference services Kalson Pang. Built along the Big Island's coast on what was once a prized retreat area for King Kamehameha, according to Pang, the Mauna Lani draws corporate guests seeking unique outdoor meeting experiences.

One of several event areas, the resort's Kekaha Lawn is the location for “Aloha Spirit Games” — team-building activities including blow-up dolphin rides and coconut tosses. At the resort's Fifth Hole facility — actually the site of hole number five on the property's golf course — groups may participate in golf cart decorating contests or enjoy excellent stargazing with telescopes, according to Pang.

A very different breed of island, San Francisco's man-made Treasure Island served as a naval station during World War II, but eventually found itself returned to public use by the Department of Defense, according to event coordinator Lori Mazzola of the city's Treasure Island Project.

Today, the island features a range of event spaces, from an intimate chapel to massive airplane hangars, and has hosted the likes of Lincoln Mercury, PricewaterhouseCoopers and Oracle, Mazzola says. She adds that Treasure Island never ceases to impress event guests. “People who have lived in San Francisco all their lives have never been here,” she explains. “You really get a whole different perspective on the city, and a whole different atmosphere here than you'd get anywhere else.”

Downtown Los Angeles' historic Hotel Figueroa is not only a popular spot for film-industry events, it's also a fine example of the area's ongoing renaissance, according to manager Uno Thimansson. “It is gratifying for us to see Hollywood discover — or rediscover — downtown,” he says.

While wrap parties and awards-show festivities are among typical events at the venue, the Hotel Figueroa welcomes many groups to experience its facilities, which include the Moroccan-themed Room Tangier and Club Fes, as well as an elegant music room, veranda bar and palm-lined swimming pool. For events surrounding the property's rooftop pool, Thimansson says he “encourages a Latin atmosphere. I normally recommend hiring a salsa band, because there's an early-California/Latin feel there.”

Up the coast from Los Angeles, Portland, Ore., offers Urban WineWorks, a combination winery and wine shop that features a two-part event space along with bottles and bottles of local wines.

With room for a mere 150 guests, the space, located in the city's hip Pearl District, is an ideal setting for intimate gatherings, according to general manager Karen Sanderson. She adds, however, “The more people in here, the more fun the atmosphere is.” Groups can occupy the 500-square-foot back room or reserve the entire 3,000-square-foot venue, and events might include wine tastings and personalized wine blendings. Sanderson says, “The guests all love the parties. But the most exciting for us are ones where the guests have live music, because the acoustics are so excellent in this space.”

For archived articles on sites and venues click on the following links:


Click on the links below for articles on sites and venues from sister publication Corporate Meetings and Incentives Magazine: