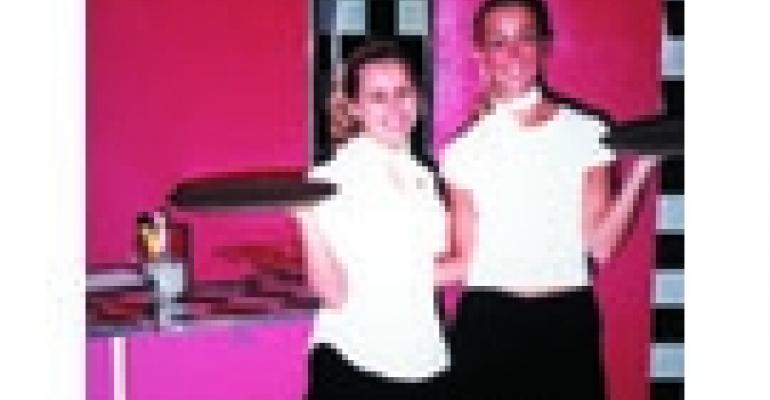 ELABORATELY THEMED SOCIAL events and clients who can afford them are in no short supply for Robert Frungillo, president of Frungillo Catering Design in Montclair, N.J. Frungillo, whose company has been staging events at local mansions for more than 30 years, says he “went really authentic” with the design of a recent 1950s-themed family reunion for a wealthy client.

Besides transforming a hotel ballroom into a '50s diner — complete with corrugated steel walls, vinyl booths and a neon sign reading “Joe's Diner” (the client's first name) — Frungillo made sure even the smallest design details were both personalized and theme-specific. “We customized a menu to fit [the client's] family,” he says. “We had your meatloaf, your fried chicken, shrimp in a basket, French fries — stuff that we never make … We put his family with the food — ‘Uncle Tony's Hot Dogs’ — it was really adorable.”

Frungillo brought in big-name entertainers from the period, including the Coasters, the Drifters and the Marvelettes, as well as custom props ranging from saddle shoes to an old-fashioned ice cream fountain that he purchased through online auction giant eBay.

Frungillo says his design inspiration for social events comes from communicating with clients in a way he describes as “a little backwards.”

“The first thing I [say to] clients when I sit down with them — this is before I know what they want — is, ‘Your guests are getting in their cars and leaving. What do you want Mr. Smith to say to Mrs. Smith?’”

Even with ample cash to spend, Frungillo says, social event clients can go overboard if asked what they want, rather than how they want guests to feel. “Expectations are on one side, budgets are on the other,” he explains. “It's my job to bring them together.”

Event producer Richard Magid ended up becoming his own best social client when he decided to tie the knot. He knew his wedding would have to wow guests — many of whom were colleagues or suppliers — while fulfilling the dreams of his bride-to-be. The decision to surprise both fiancée and friends with three days of themed celebration was a natural for Magid, president of Pompano Beach, Fla.-based Famous Firsts, who says “99.5 percent” of his clients don't know what he's planning until event day. “What I like to do is get them to walk into the event and be as surprised as their guests,” he explains.

The highlight of Magid's June multi-day affair was a rehearsal dinner with a construction motif. “We decided to build our future,” he says, “so that's how I got to this theme.” The event design included construction signage such as “Caution: Wedding Ahead,” as well as centerpieces made out of hardware, candy-filled toolboxes for the guests and a buffet table featuring food presented in paint tins and on slabs of wood.

According to Magid, he managed to impress his guests, including his college roommate, now a Broadway producer. “He's always wondering what kinds of stuff I'll do,” Magid says. “He produces what he does, and I produce what I do in my way. He wins Tonys, and I win a few Galas.”

Like Magid, Melissa McKernan, partner in Denver-based event production firm Planit, turned her own wedding into an opportunity to showcase her company's talents. “She was involved every step of the way, and then the evening of the event, she stepped out and she was the bride, and left the rest to us,” says McKernan's Planit partner, Megan Shoflick.

According to Shoflick, staging the Winter Wonderland-themed event was an exciting challenge for the Planit crew, which is used to producing corporate events for big-name clients including United Airlines, AT&T and Sun Microsystems. For the traditional Jewish ceremony, staff members created a chuppah with faux-ice legs and a canopy of cascading roses. Room decor included ice sculptures, gold-painted winter trees and a backdrop curtain of white lights.

“We knew all the guests would expect a lot from us, so we felt we had a lot to live up to,” Shoflick says. She notes that a favorite element was the evening's entertainment, which ranged from an orchestra to a disco band “complete with Afros and bell-bottoms galore.”

In choosing high-energy entertainment, bride McKernan was no different from the upscale clients she serves. “Everyone wants to one-up what kind of entertainment they have,” Shoflick says. For memorable events, “Local bands don't suffice anymore, and we're going to national bands that are well-known names.”

Elegant decor elements and custom services are still popular with social clients, but with a few contemporary twists.

Loews Coronado Bay first introduced the Chinese system of “environmental balance” into its conference services, but soon included it in weddings and other social events.

Bricnet says that California, with its love of experimentation and “new things,” was a perfect place for Loews to debut feng shui.

“The idea of feng shui is to promote unity and harmony within a group,” Bricnet says. She explains that harmonious weddings have runners down the center of the ceremony site to direct “energy flow” toward the bride and groom, as well as rows of chairs that curve toward the couple “as if everybody is embracing the marriage.” She adds that the resort's discerning wedding clients can choose extensive feng shui services provided by an expert trained in the practice, or opt for an introduction to the basic principles.

Even forward-thinking brides and grooms often are turning back to tradition when it comes to wedding accessories. Waukegan, Ill.-based designer Beverly Clark, whose Beverly Clark Collection has been accessorizing upscale weddings for nearly 15 years, says her wedding guestbook has remained a steadfast favorite with clients throughout her career.

But the accessory staples are getting modern makeovers. When she started out, “Everything was made out of white satin,” Clark says. “Today we're seeing the addition of colors and add-ons — flowers, buttons, beads, bows, etc. — to bridal gowns and veils … We're seeing slimmer and more elegant lines, jackets, two-piece ensembles.” Clark explains that she customizes guestbooks and other accessories to reflect these fashion changes.

Also big at weddings, according to Clark, are “accessories with added value and usage — elegant, but functional. Guestbooks may be used for anniversaries and other parties the couple might want to host. Goblets are no longer put into the china cabinet as a keepsake, but rather are used at other-than-formal events.”

INSPIRED BY POPULAR CULTURE AND well funded by proud parents, teen events are fast becoming showcases for the newest, hippest and best in social event design.

When designing teen events, “You have to be quick on your feet … because you don't know what they saw at school today,” says Charles Banfield, of Los Angeles-based Charles Banfield Productions. Yet ensuring that a teen event stands out among peers' parties is just as important as keeping it right in line with up-to-the-minute trends.

A recent bat mitzvah with an $80,000 price tag, excluding food, challenged Banfield to navigate these conflicting demands. He met the challenge by creating a unique, elaborate equestrian theme at the guest of honor's request, and bringing in interactive entertainment that included a vendor who makes personalized magazine covers — a popular feature at teen parties.

Carol Abrams, owner of Dallas-based Amazing Events, says today's teen celebrants are “used to things happening fast and furious.” Though she admits everything could change tomorrow, “Right now the new and best thing [is] Transformits and spandex and a lot of video, like plasma screens and live feed.”

Abrams, who produces 25-50 social events a year — the majority of them bar and bat mitzvahs — says one of the difficulties she faces in producing big-budget teen events is not being able to find vendors to fill the need for new, hip, unusual products and services. “I remember kids having ID bracelets that were silver, and you could have your name engraved on them,” she says. “I'd love to find a vendor [for] that! It can be junky little things, but at 13 you'd love to put your and your girlfriend's name on it.”

Though she considers parents her clients when doing teen events, Abrams says her experience as a high school teacher has taught her to include the adolescent guest of honor in party preparation. “Being a kid person,” Abrams says, “I try to bring that kid in somewhere, because I find if I don't, they get to the party and go, ‘Where's my area?’”

Banfield has a slightly different take. “The teen is the client,” he says. “You are ultimately trying to please them. They're not paying the check, but the parents will be grateful to you for doing it.”

Perhaps reflecting his background in mental health care, Banfield contends that large-scale, pricey teen events mean “You not only have to be an event designer and coordinator, but a therapist. Yes, you want to give the child everything they want, but Mommy's friends are coming to this, and Mommy has expectations as well. You have to try and meet everyone's expectations, or deliberate over the compromises.”

No matter how well planned a teen event is, inevitably guests “dread the DJ period,” according to Chris Dunn, president of Tucson, Ariz.-based Dunn's Entertainment. “The word ‘DJ’ for the most part means [to kids] ‘We're not going to hear everything we want to hear,’ and that's pretty much the end of story.”

But, he says, it doesn't have to be that way. Recently, the entertainment producer and his crew were selected by a group of students who had heard about the company's high-tech, high-energy performances to put on a show for their high school homecoming.

For the event, his team brought in professional audiovisual equipment and lighting, and — the key to a great teen event, according to Dunn — a “massive amount of energy.”

The group's performance, which incorporates both live and recorded music, “[was] not something they were used to,” Dunn says. “They loved getting up on the stage with us. They'd be screaming at us, like a band, wanting [a performer's] shirt, wanting their autograph. It's stuff that sounds so darn silly, but people still love that.” Dunn says the experience “catapulted” his company into a lucrative new market doing dances for high school students.

Banfield agrees that the right entertainment is a must for fabulous teen events. “You have to get a real rippin' DJ … That's what's very, very important.” He points to a 16th birthday party he produced recently where “the only thing that was really remarkable was the DJ. He was just starting out, but he had all the new music, the stuff you never hear. ‘Celebration’ would not be played at this party.”

According to Banfield, the music was not necessarily dance music — but that was perfectly fine with the kids. “At 16 they're too busy worrying about what they look like,” he says. “They want the music played, they want the dance floor just in case, but they don't necessarily need to dance to it.”