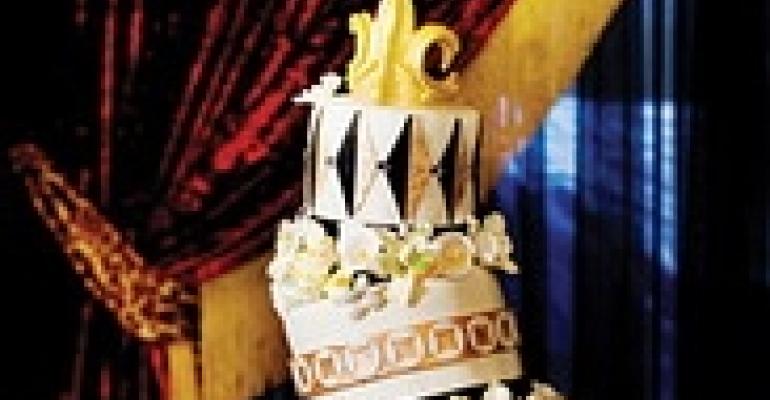 Creating upscale events is nothing new for Los Angeles-based event planner Sonia Sharma, owner of Sonia Sharma Events, so she was quick to take on a high-end Sweet 16 party. Inspired by her teen client's interest in French history — particularly French aristocracy — and the girl's Russian ancestry, Sharma created an event reflective of the honoree's sophisticated style.

Instead of splashing the name of the honoree throughout the event, which Sharma says is “customary for kids' parties,” the planner used a fleur-de-lis to give some regal French flair to the decor. “That is how we kept the event elegant,” Sharma says. “We didn't want to be tacky and have her name everywhere.”

Sharma and her team wove the symbol throughout the event starting with the invitations, which were sealed with a gold wax fleur-de-lis stamp. The invitations used the stately Old English typeface — the honoree's favorite. For party favors, Sharma embellished vanilla candles with Swarovski crystal fleur-de-lis motifs and stamped wine bottle labels with a wax fleur-de-lis emblem. The four-tier cake featured hand-cut gold fleurs-de-lis, and cupcakes displayed the insignia in icing. But Sharma went only so far: “We didn't go overboard with the symbol,” she says. Instead, “There were little touches of it everywhere.”

Sharma says her young client is “a talented triple threat — she writes poetry, dances and is very smart,” and the girl used her party to showcase her skills. For example, the honoree read one of her favorite poems to her family and friends. Also, the event team tucked an original poem by the honoree inside the boxes holding the candle party favors.

Sharma said the biggest “wow” of the event came when her client surprised her guests by performing a belly dance along with the professional dancers. “It took everyone a few minutes to recognize her in costume,” Sharma says. Other entertainment included performances by a gypsy troupe and Chelsi, a boy band flown in for the event that Sharma said is the “Russian equivalent of 'N Sync.”

L.A.'s year-old Romanov Restaurant & Lounge was chosen as the event venue because of the “glamour and decadence in the decor and the family-style Russian menu,” Sharma says. The event team's color palette of red, gold and white with touches of black blended seamlessly with the restaurant's design. To keep the look both fresh and eye-catching, Sharma turned to bright, festive centerpieces using fresh jamestory and cymbidium orchids, hydrangeas and New Zealand calla lilies.

The menu, provided by Romanov, offered traditional Russian fare. Guests had a choice of steak, baked salmon or beef stroganoff as a main dish, with sides including herring, blini with caviar, pelmeni potato dumplings and marinated wild mushrooms.

Guests took home a keepsake: their portraits shot in front of a golden fleur-de-lis accented with the honoree's initials. “Guests will probably always think of my client and this party when they see a fleur-de-lis,” Sharma says.