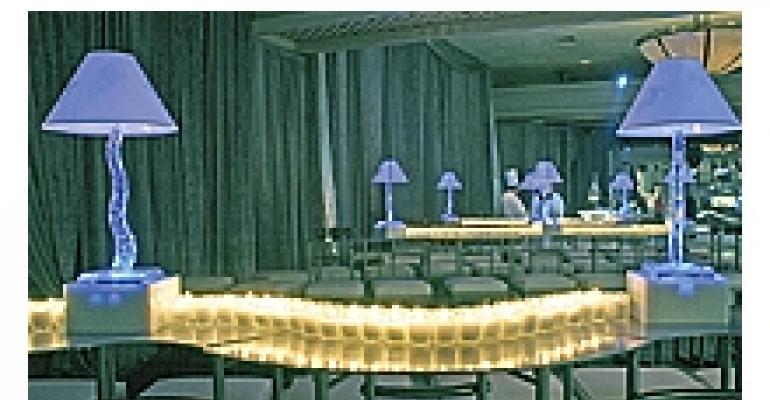 FOR event guru Steve Kemble, the Dallas Cowboys' September Ring of Honor celebration was a dream job. “When it comes to football, I am fanatical. I love it!” says the Dallas-based designer, who hails from a family of seven — count 'em, seven — Texas football coaches. The event, which honored former Cowboys Emmitt Smith, Michael Irvin and Troy Aikman, didn't just give Kemble a chance to work shoulder to shoulder with Cowboys organization insiders. It also provided the opportunity to transform a plain Jane site — Texas Stadium's Stadium Club — into a swank and super-cool Cowboys-themed lounge.

Describing the Stadium Club as “very basic and masculine in its design,” Kemble identifies one of the event's biggest challenges as transforming the space into an atmosphere fit for an A-list extravaganza. To make things even more difficult, a bar mitzvah being held in the club the night before the Ring of Honor event meant load-in couldn't take place until 2 a.m. event day. With carpet to be laid before any other setup could occur, the time crunch was that much more daunting.

Pressured as they were, a team of 72 event pros stormed the club in the wee hours, turning the “vanilla venue” into a “chic nightclub” per the request of Cowboys marketing vice president Charlotte Anderson Jones, according to Kemble. They began by draping the walls of the club in silver fabric and covering brick columns with Foam-Cor, painted steel gray and hit with lighting in breakup patterns, to create a metallic environment.

“I am a firm believer that if you want to be successful in today's event marketplace, you need to incorporate lots of branding elements into the event,” Kemble says of his design concept, which was based on a palette of blue, silver and white — the Cowboys' team colors. Branded design elements included 12,000 square feet of custom-designed carpet in the team colors, shipped from a mill in North Carolina. A “Walk of Fame” runner inlaid into the carpet featured each of the Cowboys' 17 Ring of Honor inductees. Also on hand, and on brand, was an assortment of sleek silver furniture including round-back chairs with the football team's logo applied to the chair backs, courtesy of Dallas-based Fun Factory Decorations and Special Events. Serpentine metal tables and bar stools from Orlando, Fla.-based Unique Option and blue-light acrylic lamps from Orlando-based Ice Magic completed the venue's modern makeover.

With the arrival of the cocktail event's kickoff, security was super-tight, Kemble notes. “It is not every day that you have the ultimate mix of sports celebrities, social swells and business titans under one roof,” he explains. “Trust me, we had so much security on the door, it would have been easier to crash a party at the White House.” Once they passed the party's three layers of inspections and approvals, guests were treated to eats turned out by the Stadium Club's in-house catering department, headed by Amy Phillips — “one of the best catering professionals in the country,” according to Kemble. Treats included “an Asian fusion station that was wildly popular with the ladies, while the jocks loved the sliders with cheese that were being grilled to order,” the designer recounts. Another huge hit: the soiree's “make your own” cupcake station, where guests could choose among a variety of cakes and pretty them up with Cowboys-branded toppings. “The sight of these big, beefy football players decorating and eating cupcakes was priceless,” Kemble says.

Other highlights included a custom video loop showing highlights of the honored players on 22 monitors placed throughout the event, as well as a performance from high-energy band Dance Express, provided by Orlando-based T. Skorman Productions.

Kemble, a Dallas event scene fixture and major player in the creation of The Special Event 2006 in Dallas, counts the Cowboys event as the highlight of a very busy week. Among the week's commitments were six events for the opening of a San Antonio shopping center, and an appearance on his FOX network television segment “Stylin' Steve,” where he named the best and worst dressed of the previous night's Emmy Awards.

Kemble also calls the event one of the most gratifying he's worked on. “It was an incredible adrenaline rush to see the guests' faces as they entered the event,” he says. “I felt like I had won the Super Bowl! They said, ‘Wow!’ They said, ‘Ah!’ And the ultimate compliment was when they said they should leave the club like this all the time.”