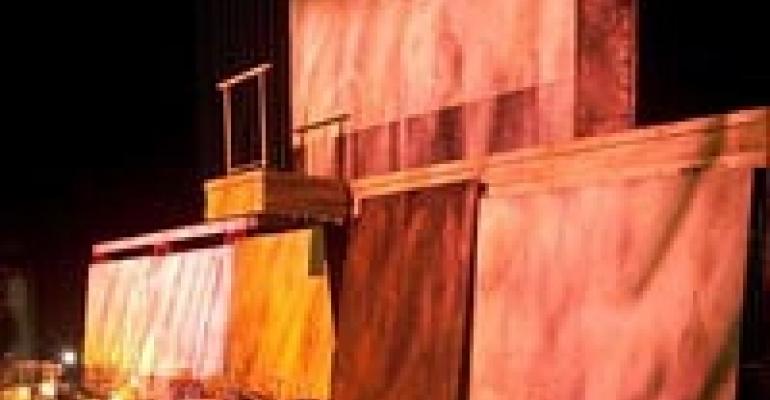 Fresh off September's gala opening of Jerry Jones Stadium — new home of the NFL's Dallas Cowboys — hometown event expert and nationally recognized “lifestyle guru” Steve Kemble turned his attention to yet another Dallas landmark. This time, it was the Margot and Bill Winspear Opera House at the Dallas Center for the Performing Arts. The event, a November gala for 450, turned out to be “one of most challenging events I've ever worked on,” Kemble says, “but also one of the most rewarding.” Here's why.

FROM YELLOW TO ‘OTELLO’

With just a few months to plan the gala opening of the much-anticipated Foster + Partners-designed building — still under construction during much of his lead time — Kemble and crew had their work cut out for them.

The producer notes that his early design plans called for an event palette keying on yellow, a nod to the dominance of the color in the building's interior. But when Kemble returned for another walk-through several weeks later, “Due to more construction, you could hardly see any yellow,” he recounts. Embracing what he calls the “exciting challenge” posed by the updated interior, Kemble turned instead to a design inspired by “Otello” — the production the Dallas Opera was performing at the new facility.

Which brought up yet another challenge for the dinner gala, slated to take place on the opera house stage itself: “The ‘Otello’ sets were so huge, there really was no place to put them,” Kemble notes. So, instead of trying to eliminate the sets, the resourceful designer opted to incorporate them, “pushing them off to the side and lighting them, which played into the decor,” he says.

As with any functioning arts facility — especially one staffed by union labor — the Winspear Opera House presented Kemble and crew with a full house of load-in and set-up obstacles.

First, there was the installation window, which was “sandwiched between productions,” as Kemble notes. Union workers gained access to the area after Thursday night's performance, and began clearing set pieces from the center of the stage. Beginning at 6 a.m. on the Friday before the Saturday evening gala, Kemble and his team — top Dallas vendors including Ducky-Bob's/Classic Party Rentals, LiveWire Special Events and Gemini Light • Sound • Video — descended on the space.

Kemble notes that he devoted much energy to his “role as referee,” overseeing the logistics of moving trucks — as well as nervous crew members — through the cramped two-bay loading dock. Fortunately, he adds, he did not have the headache of another hurdle common to working in union facilities. “Texas is a right-to-work state,” he explains. “So while we offer the work to the union first, if they don't want to do a certain element” — transforming tabletops or hanging decor, for instance — “someone else can do it.” Someone, he notes, like Luis Andrade of Luis Andrade Designs, who created the event's stunning, floral-free candle centerpieces.

After Voigt's performance, “We raised the curtain,” Kemble says, “and everybody got chills. They had tears in their eyes.” Fun Factory's “bold, heavy” glass tables — now set with gold flatware, gold stemware and gold-rimmed chargers — took center stage, accompanied by gold-cushion Chameleon chairs. Delighted guests sat down to a meal of roasted veal loin with mushroom ragout and mascarpone polenta from Wolfgang Puck Catering.

Kemble notes that his own gratification was not just professional, but personal. “The city of Dallas means so much to me,” he says. “To be selected to work on this event was one of my greatest honors — but also one of my greatest challenges, not just in terms of logistics but also because I knew all eyes would be on me.” He credits his vendors' talents, and teamwork, for the event's success: “Without everyone working together, it never would have happened.”

Surprisingly, Kemble also credits the event's short lead time as another factor in its success. “With such a short window, everyone is so focused,” he says, adding, “I love the energy of it; I love the adrenaline.”