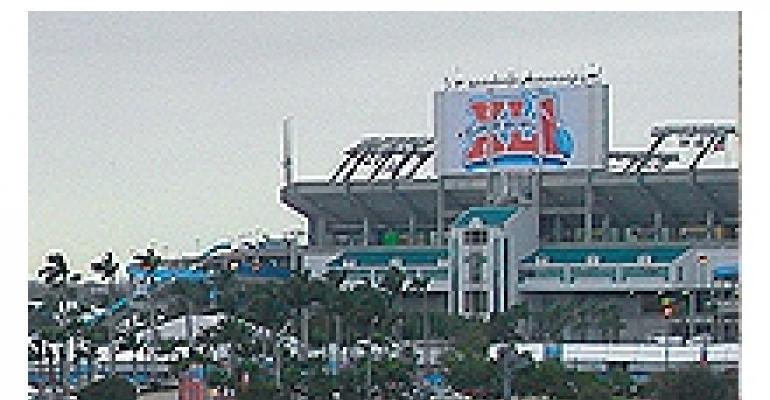 THE excitement of the Super Bowl comes to a different city each year, and it brings some stupendous supporting events. This year, event professionals in Florida served up winning bashes for Super Bowl XLI, held Feb. 4 in Miami. Here, five industry players share how they finessed the pitfalls posed by high-profile parties.

ALL EYES ON YOU

A winning special event during Super Bowl is more than a one-time victory; event pros can rack up future business from satisfied clients. “Super Bowl events have a huge influence on future corporate business,” says John McPhee of Miami-based A Joy Wallace Catering Production & Design Team. This year, the catering company provided food and beverage for three Super Bowl events. Not only do Super Bowl events draw a demanding VIP crowd but also the attention of the world. Super Bowl is the most viewed U.S. television broadcast, putting extra pressure on anyone staging an event tied to it. David Tornek, owner of Touch Catering in Miami, says that the game's celebrity means that event producers must be at the top of their game. “You have the significance of the Super Bowl, the pinnacle of sporting events, short of the Olympics,” Tornek says. “The eyes of the world are watching.”

On game day, A Joy Wallace served both a 2,250-guest party at the Touchdown Club and 600 guests at a Cadillac event out of one 80-by-100-foot kitchen. To fill this tall order, McPhee turned to staffing and catering companies that A Joy Wallace works well with, “and got very creative,” he says. “It's not like a normal day. There are literally hundreds of events going on, and there's only so much staff available.” For smooth service, A Joy Wallace bussed in staff and supervisors from as far away as Naples, Fla.

On top of that, finding enough skilled people to cook the food was also a challenge. During Super Bowl, “The pool of catering chefs is even more limited and more stressed,” McPhee says. So the catering team called in the reserves: Nine chefs — including Tim Lundy, CSEP, of Atlanta-based Distinctive Design Events — flew into Miami to assist on the big day. Two chefs were invited thanks to contacts McPhee made at The Special Event in Los Angeles in January, and three chefs came from as far away as Montreal. McPhee notes that it was a great experience for everyone. And if the chance presents itself, “A Joy Wallace will reciprocate in a heartbeat,” he says.

On the big day, A Joy Wallace delivered game-friendly fare. Phoenix-based M Group Scenic, the event producer for the Cadillac and Touchdown Club events, “challenged A Joy Wallace to provide ‘a taste of Miami,’” McPhee says. So the caterer served regional dishes such as blackened chicken and South Beach salad. The biggest hit, however, was the “slider” stations McPhee had suggested; the Super Bowl crowd loved the small sirloin and turkey burgers. Indeed, the casual vibe at sporting events is what makes them special, McPhee says. In addition to being relaxed and often dressed to support their team, “The guests have a lot of enthusiasm,” he says. “There's an extra level of excitement, and it's nice to see that people want to have fun.”

Teamwork and planning enabled Tornek to deliver three events this year, including the Super Bowl Saturday Night event at Bay Front Park in Miami. “It all goes back to having a good plan, and at the end of the day, it's logistics,” Tornek advises. Touch Catering fed 3,400 guests of its client, the National Football League, at the park's amphitheater, which had been redesigned for a swanky evening with platforms built over the seats to accommodate lounges and dance floors. Thirteen stations were decorated to represent different countries or regions, immersing guests in the international theme. For example, the Caribbean station featured driftwood, pink sand and conch shells and served coconut-infused clam chowder.

It's not just the Super Bowl game itself that has a history of memorable moments; event attendees have come to expect grand parties as well. “These events have, over the decades, taken on a legendary reputation for being dazzling, unique experiences,” says Barton G. Weiss, owner of Miami-based Barton G. The multifaceted company, which handles event design, production, management and catering, delivered 16 events over Super Bowl weekend, requiring 20,000 man-hours of production just for the 11 Super Bowl-affiliated events, according to Weiss. “The Super Bowl is truly larger than life as a sporting event,” he notes.

Barton G's “Passport to Paradise” event hosted 4,000 VIPs on Friday night before the game. Since the event took place at the tropical Parrot Jungle, a bird sanctuary and botanical garden, the event team worried that the venue's 1,800 animals and 1,100 tropical birds — plus over-the-top decor — might overwhelm event attendees. So the team created five distinct areas, each replete with candles, music and entertainment such as stilt walkers. The party's invitation doubled as a “passport,” which the guests used to enter the different areas. “The most popular destination proved to be a beach we created, complete with fire pits and chaises longues,” Weiss says.

Some Super Bowl events aim to please the public. Large crowds of football fans often raise money for charity by attending events featuring famous figures. With only four months of planning time, Boca Raton, Fla.-based The Special Events Group set out to spice up the NFL's pre-game “Nations in Rhythm” concert in January. Stacy Stern, CSEP, event producer for The Special Events Group, notes that she would have liked more time to coordinate the Latin- and Caribbean-themed concert at John U. Lloyd Beach State Park in Hollywood, Fla. Even with the tight schedule, “Sporting events are much more fun,” she says. “Athletes are the best type of celebrities.”

The 1,000-guest concert was the NFL's kickoff event and benefited the Young at Art Children's Museum. Describing the beach site as the “perfect setting for a nighttime concert,” Stern crafted a venue that included a 40-foot-square stage for such acts as Brazilian capoeira dancers, a 13-piece steel drum band, samba dancers and Latin Grammy Award-winning flutist Nestor Torres.

Like others, Stern found that lining up reliable staff in Florida during Super Bowl was a hurdle. She sidestepped the potential problem by turning to trusted employees. “Luckily my key coordinators are very strong and made sure that all areas of check in and ticket sales went smoothly,” she says.

Weiss agrees that Super Bowl events demand the best that event pros have to offer. “You expect the unexpected,” he says, “and have the ingenuity and the flexibility to deal with it in as seamless a manner as possible.”