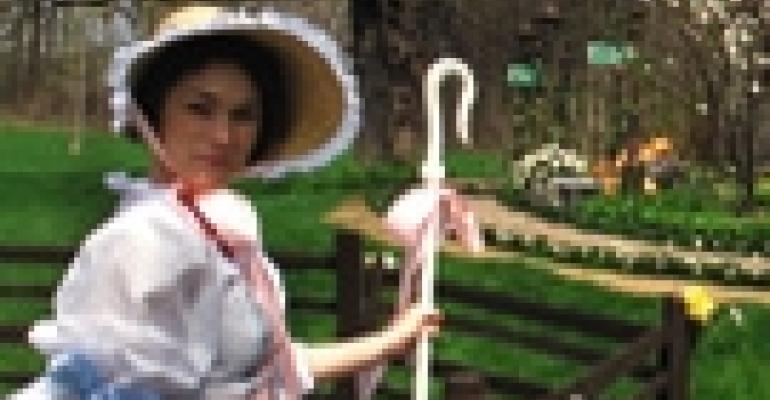 A guest of honor with a soft spot for baby animals inspired the theme for a surprise baby shower produced by Tina Carlson, president of Chicago's Ivan Carlson & Associates. The doting husband who hired Carlson to design the early spring event “wanted it to have a very overt, whimsical, childlike quality,” she says. “We ended up with Mother Goose because it encompassed a lot of traditional children's elements and values.

Set at a pastoral venue that looked like an “enchanted cottage,” according to Carlson, the high-tea event featured feminine decor, finger foods, a serenading Sweet Adelines chorus, and a sculpted cake depicting “the cow jumping over the moon.”

A real live Little Bo Peep was in attendance, along with her baby sheep which could have been a problem for Carlson, if she hadn't done all her research. The owners of the venue, she says, “wanted to be certain that the lambs wouldn't eat any of the emerging grass, so we had to make sure they were full before they came in.”

With only half the budget she'd had in previous years at her disposal, Kathy Miller of Inverness, Ill.-based Total Event Resources found herself digging deep into her creative resources to develop a theme for a 2001 bash for Phillips Lighting. By looking into Phillips' mission, objectives and vision, Miller came up with “Imagine” a theme characterized by elements of technology and progress, and enhanced by the incorporation of company products into the decor.

When you walked in the room, everything was a sea of blue lighting, very slick,” Miller says. Custom-designed lighting fixtures arched over food stations, while cabaret lamps set upon translucent lightboxes decorated tables dressed in swirled-blue-and-green linens.

A “stage in the round” wrapped in sheer blue fabric adorned with blue orchids bore a guitar quartet and served as the room's focal point. Miller notes, “They played contemporary acoustic music, and a lot of Beatles, which worked with the whole ‘Imagine’ theme.”

For a high-end Coral Gables, Fla. Bat Mitzvah, ME Productions' client handed down two requests: that the event be based on a “Party to the Max” theme and that it have a “nightclub kind of feel.” The catch? The Pembroke Park, Fla. event production company had to execute these ideas in the historic, conservative Biltmore Hotel, and they had to do so for a luncheon reception.

We took the theme and made it match the hotel,” says Linda Reeder, ME Productions' director of social sales. “We brought in a bar, black leather couches, highboys and cocktail tables.” The 110 children in attendance were free to lounge and socialize on the couches or eat at the bar, which served soda only, of course.

For the adults' area, ME Productions set out more traditional round tables, each topped with a lamp featuring a shade bordered by a black iridescent cocque plume and lit up with a pink bulb. Closed drapes ensured an after-dark atmosphere. It was, according to Reeder, “a very swank look that gave everything a clubby feel, but still maintained the elegance of the room.”

Research provided the bridge from concept to creation for an annual fundraising ball at the Natural History Museum of Los Angeles County. With a goal of raising money to help pay for the refurbishment of the site's “California History Hall,” museum representatives came up with a “Celebración de California” theme, according to Janet Elkins, president of Los Angeles-based Eventworks, which produced the event. But it was her staff's dedicated digging for information that allowed Elkins to turn the theme into a vibrant recreation of early California life.

“They wanted us to be very authentic,” she says. “They actually gave us a document about the history. We went to bookstores and used the Internet to come up with looks that would be appropriate for the era.

At the event site, the Eventworks team brought their history lesson to life with a rich array of floral, props, lighting and decor elements. A walkway leading from the California History Hall to the event's main tent featured hanging gourds, ox carts, hitching posts and fountains, framed by fragrant sage and bright bougainvillea. Inside the tent, warm shades of red and gold enhanced an environment highlighted by traditional Spanish furniture, candles and wrought-iron epergnes filled with protea, hydrangea, ginger, roses and chili peppers.

“The guests really loved all the attention to detail,” Elkins says. “When they walked into the tent, there was an element of surprise at finding antique chandeliers suspended from the ceiling. No two tables had the same table treatment. And the transparent tent allowed guests to literally dine under the stars and moon.”

The 58,000-square-foot tent's sub-aquatic sub-themes included “Under the Tropical Sea,” “The Titanic,” “Shipwreck” and “Mystical Island.

Three-dimensional dangling legs, suspended from the tent ceiling, made guests feel like they were under the water's surface, according to Freeman Decorating account executive Nan Vine. In addition to the legs, Vine says, “The interior of the tent was blue, which really added to the entire theme. There were gobos of underwater motion. You actually felt like you were moving around.”

A made-up name for a made-up game made up the inspiration for a product launch event designed by a team from New York-based Eventstyle, led by creative director Mark Addison. Staff used timed video projections and strobing pinspots to replicate the high-flying action of “Quidditch,” a magical sport played by characters in the “Harry Potter” book series, at a reception hosted by Warner Bros. Consumer Products to promote a film and stage show based on the series.

The challenge here was the fact that all their visual illustration [of the game] was in a two-dimensional format,” Addison says. “From that, we had to create a three-dimensional environment that guests could feel like they were a part of. Everything had to be transformed.” Other branding elements for the cocktail reception included floating potion bottles, bubbling chalices and banners in Quidditch “team colors.”

We try to play off a popular, current theme and correlate it with the industry,” says C. Lewis Consulting's director of operations Diana Ninowski about the development of the theme for the Society of Plastics Engineers' awards ceremony event.

Space-themed linens dressed tables set in front of a stage with an elaborate hand-painted intergalactic backdrop. A video of skits highlighting the evening's theme appeared on two large screens and featured plastic products incorporated into the “2001: A Space Odyssey” story.

When the Chicago AIDS Foundation turned to Tom Kehoe of Chicago-based Kehoe Designs to create an event, their only request was that the color scheme be black and white with a hint of red. Building upon this basic concept, Kehoe designed a room dominated by bold contrasts, crisp shapes and a distinctly modern feel.

“I always go to fashion magazines for inspiration especially Italian fashion magazines, for colors and patterns,” Kehoe says. “Everyone does black and white, but that's where I went for ideas on how to give it a fun twist by blending everything together.

Kehoe's twist took the form of polka dots, checkers, chevrons and stripes, and even a vivid starburst design on the venue's centrally placed dance floor. Large panels, lit from within, lined the perimeter of the room with projections of deco-inspired curves accented by a splash of deep red color. White illuminated lightbox structures topped tables, each one displaying a dessert cake.

An elaborately decorated stage posed the event's one challenge, according to Kehoe. While the large red and white carnation spheres that stood on either side of the stage turned out to be a favorite decor element among guests, “they were so big that they were just too big for the stage,” Kehoe says. “They ended up taking away from the entertainer, which was Chaka Khan.” Members of Kehoe's staff had to scale down the intricate floral arrangements on site and with only hours to go until the start of the event.

For a New Year's Eve event hosted by the Mirage hotel in Las Vegas, Allison Hart, assistant director of events and design for MGM Mirage Events, proposed a theme that was “a fusion of digital technology, cyber-age design and dot-com-inspired trends.”

Eventually the theme evolved into “Fusion,” a high-intensity blend of natural and technological elements.

In a room divided into four elemental zones fire, earth, liquid and air and brimming with go-go dancers, undulating video projections, monochromatic floral and ultra-modern furnishings, guests danced the night away and toasted the New Year. Hart notes that one of the challenges in producing the event was “just getting everything lit properly and not making the place 100 degrees with all the lights that were needed.”