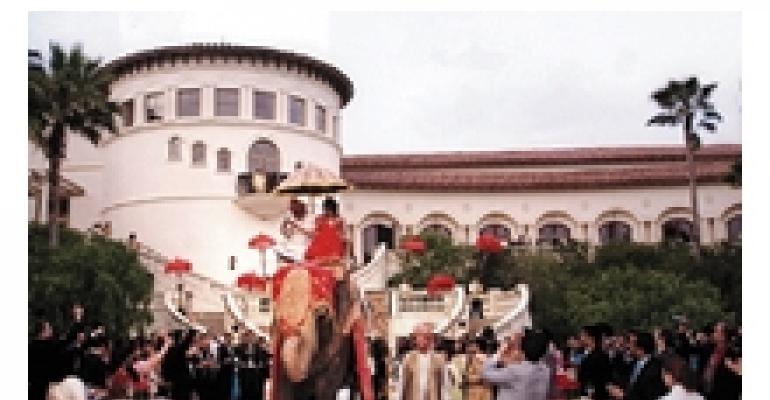 TO produce a wedding reception with the perfect blend of Indian motifs and New York style, Barbara Wallace, MBC, CSEP, of Corona del Mar, Calif.-based Barbara Wallace Weddings had to “walk a line” of contrary ideas, she says. The event team — with the design talents of Christopher Aldama of Fiori Fresco Special Events in La Habra Heights, Calif. — fashioned a fashionable reception in June with plenty of traditional elements at the St. Regis Resort and Spa in Laguna Niguel, Calif., for 334 guests.

With the groom's father calling for a modern event yet the newly married couple asking for traditional Indian elements, the event team needed to figure out a way to please both parties. The solution had the team “blending by taking elements and juxtaposing them,” Wallace says, an approach that paid off with a Gala Award nomination.

Keying on the bride's dress, the event team added two distinctly Indian elements to the reception's decor. The color red and gold paisley motifs adorned such objects as low cocktail cubes and the wedding cake, while paisley gobos played on the walls. Guests enjoyed cocktails served from three elaborate red pavilions housing food, drink and musicians on the resort's lawn. “Building the pavilions was quite the challenge,” Wallace says. “We were basically building houses — it was a little city.”

The crimson pavilions incorporated yet another India-inspired detail: keyhole-shaped Moghul arches. The arches were repeated on the walls of the ballroom, accented with patterned fabric inserts; the architectural detail transformed the simple space into a dynamic venue. A red carpet and sprays of red roses continued the theme. The Indian elements shared the space with modern Ghost chairs, a high-gloss dance floor, white suede banquettes and illuminated tables. Further fresh treatment of the ballroom included translucent white stretched wall panels — bathed in changing colored lights — to spice up the venue's dark walls.

A sizeable surprise was in store for guests. An elephant — the fourth nod to traditional Indian themes — dressed in red and gold carried the couple into their party. The elephant motif was repeated in the elaborate wedding cake and with the green jade elephant wedding favors given to guests.

Wallace notes this was the first time she has worked with an elephant, and she would not hesitate to do it again, thanks to the expert help from the company that supplied the animal — Have Trunk, Will Travel. The Perris, Calif.-based company kept the party's pachyderm hidden from the guests, ensuring the surprise reveal. “I never felt, ‘Oh my God, it's going to run away!’” Wallace says.

Wallace's only regret? “The lawn was so well-decorated, it would have been nice to let the guests enjoy it longer,” she says. Because some guests missed the couple's show-stopping arrival, Wallace says she might have extended the solo cocktail hour to two. “It's very typical in the Indian community to arrive late,” she explains. “They joke about it being ‘Indian standard time.’”