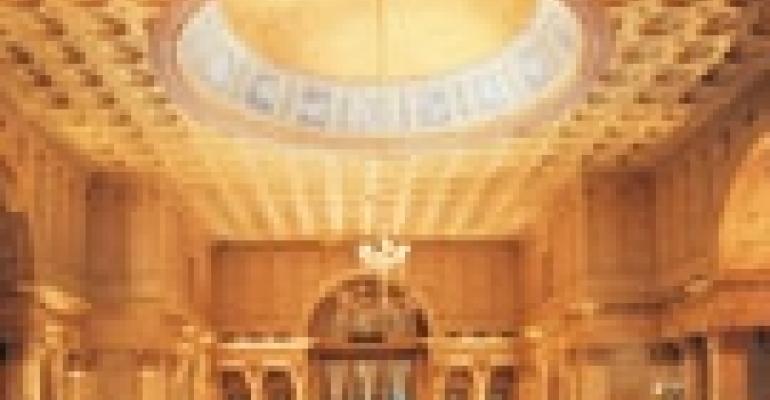 FOR THIS MONTH'S COVER STORY, WE TURNED TO MANY SOURCES, INCLUDING THE READERS OF SPECIAL EVENTS MAGAZINE SISTER PUBLICATIONS ASSOCIATION MEETINGS AND MEDICAL MEETINGS, TO FIND OUT WHICH HOTELS AND RESORTS TOP EVENT PLANNERS' LISTS. HERE, WE TAKE A CLOSER LOOK AT SOME OF THEIR FAVORITE SITES, AND DISCOVER THAT WHEN IT COMES TO EVENT HOTELS AND RESORTS, GOOD LOOKS AND GREAT SERVICE ARE STILL THE BENCHMARKS OF SUCCESS.

New York-based event producer Marcy Blum, of Marcy Blum Associates, calls the Regent Wall Street hotel “exquisite.” Built in 1842 to serve as the New York Merchants Exchange, the hotel houses a 12,000-square-foot, five-story ballroom with a ceiling of Wedgwood panels. “It's one of the few spaces not only in New York City, but in the whole East Coast area, where you can do a large event without having to put your guests in a sort of rec-room-type hotel ballroom,” Blum says.

The hotel features a conference level with almost 2,000 square feet of space divided into six rooms, including a boardroom with an attached terrace overlooking Wall Street and Trinity Church. Despite its venerable age, the property offers all the modern technical accoutrements: video conferencing, Webcasting, and T-1 and ISDN lines among them.

Director of catering Leslie Mastin says the hotel's location in the heart of New York's financial district has made the Regent Wall Street a favorite for corporate events. “It's very convenient for all the large financial institutions to just walk across the street from the stock exchange,” she explains.

Location also became a crucial factor during the World Trade Center attack in September. In the days that followed the devastating collapse of the towers, the Regent Wall Street, which did not sustain damage, opened its ballroom doors to some very special guests indeed: emergency workers, who used the space to nap, eat and phone friends and family during breaks between shifts at ground zero.

“If you want to do a destination event and you want something really lavish and lush, you want people to be really floored,” Blum says, your best choice is “something like The Breakers,” in Palm Beach, Fla.

While the hotel's seaside setting makes it a popular site for weddings, the recently added 15,000-square-foot Ponce de Leon ballroom — which can be separated into six sections and features double air-walls — makes the property a prime spot for corporate meetings as well, says director of conference services Michele Wilde. “Because it's only three years old,” she explains, “it's more technically advanced than many hotel spaces, and also very beautiful.” Complementing the well-equipped new ballroom, Wilde adds, is a range of technical services including computer rentals and an in-house production company that handles everything from corporate “wrap-up” videos to television commercials. It's amenities such as these, she says, that bring in about 600 corporate events a year, in addition to almost 300 social celebrations.

The hotel offers close to 23,000 square feet of indoor meeting space plus many lawns and gardens that can be used for outdoor events. “We pride ourselves on our conference level being very intimate and very quaint, and not having the feeling of a conference center,” says Michelle Caporicci, director of catering and conference services.

One of the features that sets the Ritz-Carlton Laguna Niguel apart from other sites, according to Caporicci, is its event-management service, which provides each group with a dedicated manager who “shadows” the client's meeting planner.

Darren Pound, the property's director of food and beverage, points out another distinctive service feature. In addition to using meeting planner satisfaction scores from marketing information service JD Power and Associates, “Our company has a program called MERV, which stands for Meeting Event Reliability Victory,” Pound says. “We've audited every department in the hotel, really focusing on the ones that have the biggest impact on our meetings. We've looked at where the No. 1 defects were and are in the process of eliminating those.”

The hotel's event-facility centerpiece is the Versailles Ballroom, says Jon Kleine, catering and convention services manager. He notes the room's 200-guest capacity, plus “chandeliers, beautiful carpeting and a breathtaking view of the San Jacinto mountains.”

Abundant outdoor facilities, including rose gardens, arbors, ponds and fountains, make the property popular with wedding clients, Kleine says. He estimates that the hotel handles 50 to 60 weddings a year, most of them outside. “In the 21st century,” Kleine says, “we can cool and heat anything outdoors,” allowing for al fresco events despite the hotel's desert setting.

On the corporate side, the Merv Griffin Resort is a favorite for executive retreats and incentive programs, according to Kleine. He cites Nortel and Business Week magazine as clients, and notes the value of the property's on-site DMC, recreational facilities and close proximity to downtown Palm Springs and the local airport. Mostly, though, he says, “It's the 14 acres. With 104 rooms, that's an awful lot of property with not that many rooms. It just lends itself to camaraderie and rejuvenation.”

A combination of great location and gracious service make the Sheraton Seattle Hotel and Towers a winning site, according to Christopher Grace, meeting services coordinator for the Elk Grove Village, Ill.-based American Academy of Pediatrics. “It's in the heart of Seattle so everything is walkable,” Grace says, adding that the hotel's staff “can handle special requests like a charm.”

Veteran chef and Sheraton Seattle director of food and beverage Tom Kovacs agrees that the hotel's location adjacent to the Seattle Convention Center is a great feature, but, he insists, “Food and beverage is the key to our operation.”

With almost 30 years experience as a chef, Kovacs says he has seen a lot of changes in client demands. He developed Sheraton Select Service — a four-course multi-choice menu that guests use to order restaurant-style from waiters — to meet some of those needs.

Offering this kind of flexibility can be a challenge, especially in a hotel that features four separate ballrooms and handles 1,800 to 2,100 events annually, according to Kovacs. But, he says, these measures are all part of serving today's food-savvy clientele. “People know what they're ordering,” he says, “[and] they're always looking for something new.”

Another one of Grace's top picks, the Royal Sonesta Boston, also offers great location, but with a twist. Technically situated in Cambridge, across the Charles River from Boston, the Royal Sonesta is more affordable than many hotels in the city, but still “offers Boston out your back door,” Grace says. He also notes a “spotless property and perpetually friendly staff.”

Director of food and beverage Noushig Hagopian says the hotel does about eight events each week within approximately 12,000 square feet of “neutral deco-style” event space “with lots of original artwork” and river views. Corporate meetings generally take up weekdays, while weddings fill the weekend slate. Despite the high volume of events, Hagopian says the Royal Sonesta, which offers a range of services she describes as “soup to nuts,” is committed to giving personalized attention to each client. “What we sell here is privacy,” she insists. “If you rent the ballroom [for a wedding], you will not see another bride in the ladies' room.”

Each event may be considered unique at the Royal Sonesta, but the approach to producing them is the same across the board, according to Hagopian. “What we're trying to do is make these events — whether corporate or social — sensual experiences,” she says. “We don't want people to just walk in and think, ‘Oh, the room looks pretty.’ We want to get everyone's senses moving. We'll really tweak the lighting or have some kind of cooking happening.”

In a city where space is at a premium, the Hilton San Francisco is a large-capacity standout. Maureen O'Donnell, director of catering, says the property is the largest hotel in the West, with the exception of the gaming hotels of Las Vegas. With 1,900 guest rooms and about 130,000 square feet of meeting space including two ballrooms — one that can accommodate a dinner for up to 2,500 seated guests — the Hilton has a natural appeal for major corporate clients. O'Donnell says 2001 has been a “big pharmaceutical year” and names Pfizer and Novartis among recent clients.

O'Donnell has been integrally involved in developing the hotel's banquet menus, and she considers them among the property's best features. “There's a fall/winter menu and a spring/summer menu, and they're based on what's available seasonally,” she says.

But she's quick to credit another event services department with helping the Hilton maintain standout status. “Our ballroom sound and lighting department is probably the only one of its kind here it the city,” she says. “These engineers don't work elsewhere in the hotel. They don't change light bulbs one day and then go produce a show the next day. They're strictly there to produce shows. That's probably why corporate planners think it's a great entity.”

Instead of modern urban style on a grand scale, the resort “recalls famous New England villages from the turn of the century,” according to senior vice president/general manager of sales, services and Disney Vacation Club George Aguel.

He says corporate clients may choose to take advantage of the Disney Institute — a program that allows meeting attendees to go behind the scenes and meet with Disney leaders to learn about the company's operating practices.

Whether social or corporate, events at Disney are designed to be “an experience,” Aguel says. “We immerse our guests in settings from another time and place, but we combine that with state-of-the-art facilities, constant attention to detail and legendary service.”