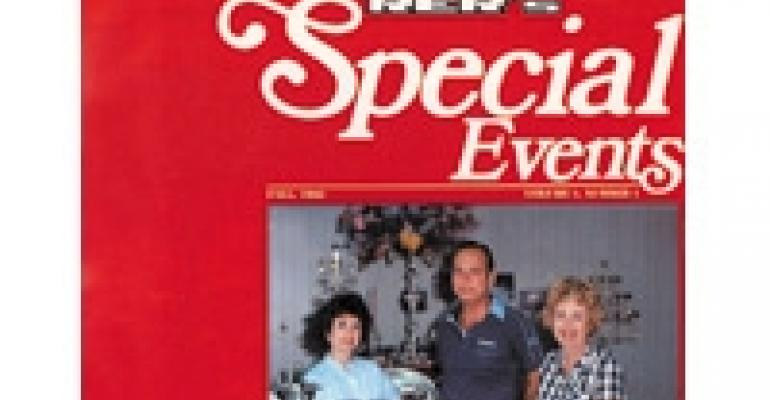 Where Were You in '82? Special Events Readers Share Career Stories

Special Events celebrates 30 years in publishing this month, and we reached out to the events community with the question, where were you in 1982? Here's what we heard back:

"In 1982 I started my career in the hospitality industry by working for the original Sahara Tahoe in South Lake Tahoe as the lead cashier for the hotel. I worked with the headliner entertainers that were performing in the showroom and the high rollers—we didn’t call them 'whales' back then!"
Kathy Newby, director of operations, Robert Fountain International

"In 1982, I was the chair of the Hotel, Restaurant and Travel Administration department at Georgia State University in Atlanta. That is where I learned about the convention industry. Beginning in 1978, I started putting the first meeting classes in higher education into the curriculum at GSU. In 1982, with the guidance of Don Walters--then executive director of NAEM, which is now IAEE--I added the trade-show class."
Patti Shock, CPCE, professor, UNLV

"I was working on my Ph.D. in psychology and paying for grad school working as a magician at local restaurants and corporate events. Got the degree, still doing magic, and added 'event producer' and 'proud father of three' to the list."
Ron Porter, founder/executive director, Magical Events

"I was being born and dreaming of parties …. "
Stephanie Laing, special events recruitment specialist, I Am Recruitment

"I was a Latin American Studies major in college in New Orleans, more focused on going to parties than planning them! At that point, I was planning to get a Ph.D. in Romance languages and literature."
Merryl Brown, founder, Merryl Brown Events

"In 1982, I was leaving my downtown law firm job—which I loved—after eight years to begin my off-premises catering career—which I love still—at Larry's Brown Deer Market in suburban Milwaukee. I learned so much: cheeses, wines, deli, produce, specialty gourmet foods, and I can never thank them enough for those days. A small shop, but a mighty and 'foundational' experience. Hats off to Larry, Steve and Jim Peterson! Still in off-prem--30 years, many joys and countless incredible friends later."
Shelley Pedersen, CPCE, client services, Affairs to Remember Caterers

"I graduated from the Bachelor of Commerce program at the University of Toronto and started my abortive auditing career at Price Waterhouse on the 53rd floor of a downtown Toronto skyscraper. It lasted two and half years—then events for the next 27!"
Don Saytar, founder, Cornerstone Entertainment Concepts

"I headed off to Brown University to get a B.A. in Arts (useful) and a B.A. in marine biology (nice, useless degree). Pretty sure I was following the Dead at that point in my life. Taking classes at Rhode Island School of Design, too. Soaking up my youth, feeling optimistic, ready to change the world. Spent long hours in the studio blasting music, dreaming and scheming with friends. The '80s were a great decade!"
Susie Perelman, owner, Mosaic Inc.

"I was three years old but I guarantee you, I was organizing play dates and making sure details were in place for my tea parties!"
Sarah Sharer Schnell, senior program manager, Total Event Resources

WATCH FOR THE FLYING KNIVES

"Starting my very first restaurant job as a busser at a resort—the start of my hospitality career! I remember the chef throwing a knife across the kitchen into the wall next to me as a warning, 'Just so you know what this business is like.'"
Kristjan Gavin, CMP, founder/president, In Good Company Meetings and Events

"I was a junior in high school planning school spirit events and dances. No foreshadowing there!"
Gwen Semenero Helbush, vice president, Where to Start Wedding and Event Management

"I lived in Spain and attended the University of Salamanca. I wanted to learn Spanish and travel abroad. My creative calling came later when I turned a hobby into a custom stationery design business for the special events industry."
Paula Estes, owner, Petalos di Pauli

"I was only 12 but I am sure I was being dragged by [mother] Andrea to an MPI meeting somewhere!"
Jon Michaels, vice president operations, Extraordinary Events

"Yep, I saw you at the MPI meetings, Jon!"
Janet Elkins, president, EventWorks

"I had just been hired at Miramar Communications as director of market development by [owners] Tim and Denise Novoselski; they wanted to develop new markets. One of Tim's ideas: 'Find out about the party rental market what is going on there! I think there's more to it than party rental.' You guessed it: We discovered an entire industry out there, and Special Events magazine and The Special Event were born!"
Carol McKibben, consultant, McKibben Consulting

"Our company was one year old. Deborah Borsum and I became partners that year. We operated out of my apartment in Oak Park, Ill. In addition to running the company, I taught nightclub and talent management at Columbia College in Chicago, and nights and weekends I stage-managed Tut's Nightclub in Chicago. Deborah was the corporate marketing director for 12 shopping centers in the Midwest."
Robert Sivek, CSEP, executive producer, The Meetinghouse Companies

'THE SKY'S THE LIMIT'

"In 1982 I had just arrived in Los Angeles from Houston and realized the sky was the limit. I started in restaurants with the Hamburger Hamlet chain. I began my fulltime events career with Walt Disney Studios at the commissary and designed all of the on-lot events, awards shows and movie premieres. It was the best classroom for event design as I got to use real movie costumes, makeup, props and decor. The on-lot cast party for 'Pretty Woman' was my favorite—Tuxedos and Stilettos. I have been blessed with amazing locations, creative support staff and fabulous clients for these 23 years in the events business, and it only keeps getting better! Life is a party—celebrate!"
Peggy Kelley, president/principal designer, Timeless Celebrations

"I was the director of theme parties and special events at Theatre Techic in Hawaii."
Patti Coons, CSEP, Nalu Creative

"At the Bank of Montreal in Montreal, I was in charge of sponsorship events around the world. I did events in London, Paris, Zurich, Frankfurt, New York, Chicago, Calgary and Toronto—but almost never in Montreal!"
Alison Silcoff, founder, Alison Silcoff Events

"I was director of weddings and events for Champ Williams at Orlando International Airport. Had a blast pulling off the first 'fly-in and wed' at an intentional airport! And you wonder why I have such a passion for weddings …."
Jon Berry, president, Celebrations Unlimited

"In 1982, I had just graduated from college and started working for a U.S. Senate candidate producing events for his campaign. I had gone to the Dallas Public Library to do some research for an event (that will tell you a little about how things were different then; now you can just sit at your desk and Google the word "events"!), and there before my eyes was a copy of Special Events magazine! Wow!' I thought to myself, 'This really is an industry!' First thing I did was call my former college counselor to tell him about the magazine I had found and suggested that the school have it in the college library as well! I knew from the moment I put up that balloon arch at my high school prom that I wanted to be in events and went to college with this in mind! When I entered college, my counselor suggested I get my degree in public relations because, as he had said back then, 'It was PR and ad agencies doing all the events.' In that day and time this was the case and is still today to some degree, even though of course the world of events is stronger than ever, and I attribute so much of what I personally learned and the growth of our industry to publications such as Special Events! Seeing Special Events magazine in the Dallas Public Library 30 years ago is something I will never forget!"
Steve Kemble, "America's Sassiest Lifestyle Guru"

"In 1982 I joined a fledgling party planning company called It's the Main Event as a prop designer making $4 an hour. It was headed by Cheryl Fish, Howard Kaish and my brother, Curtis Dahl. It wasn't long before they realized my true worth and gave m a raise to $4.50 an hour! It's 30 years later and the rest is history—I now make $4.95 an hour, adjusted for inflation! It was right around then that I picked up my first copy of Special Events magazine and have been reading it ever since. I'm grateful for the inspiration, ideas, and sense of community the magazine has given me over the years, and for all it's done for the events industry. Cheers to another 30 years!"
King Dahl, executive director of event design, MGM Resorts Events

The September-October issue of Special Events, which mails next week, includes a major feature on milestone events and the 11th edition of our "50 Top Event Companies" list. The magazine is free to ISES members; subscriptions can also be ordered here.

Turning Interest into Action: Breaking Down Marketing Funnels from Top to Bottom
Apr 18, 2022