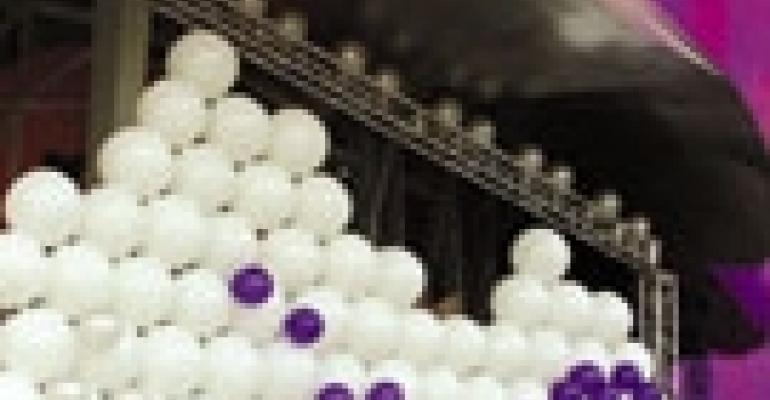 WHAT MAKES A SPECIAL EFFECT “SPECIAL?” Successful effects have less to do with making the loudest noise or using the brightest colors than you might think. While modern equipment and expertise mean that flashy effects are more over the top than ever before, subtle, atmospheric effects are also gaining popularity with effects producers and event planners alike.

Some of the most innovative industry professionals are turning ordinary decor and building elements into extraordinary effects.

Kevin Szary, director of sales and marketing development for LaserMedia in Los Angeles, says that one of his company's hottest new effects is a water scrim. The scrim, which “comes in 10-foot sections that are linkable and seamless,” according to Szary, was used at the most recent World Stunt Awards, held in Santa Monica (Calif.) Air Center's Barker Hangar. “It acts like a scrim, but it's a waterfall that you can do any type of projection on.”

Another cutting-edge creation is the exploding balloon wall. According to Scott Anderson, creative team director of Los Angeles-based Talking Laser Co., the balloon wall is especially popular at corporate product launches, such as a Bausch & Lomb product reveal his company helped produce. “It was a pretty dry meeting, and this balloon wall was forgotten by the audience as they're sitting there hearing speeches,” he says. “But then suddenly the music builds, the fog grows, the lighting pulses, and the balloon wall explodes. It's a powerful moment.”

Traditional special effects favorites are getting attention as well, thanks to high-tech makeovers. Lasers have become more versatile as state-of-the-art computer systems allow special effects coordinators to create 3-D graphics and vary colors and timing more easily, according to Szary.

Pyrotechnics have also perked up. With new product designs and higher quality control in place, “We now have stage pyrotechnics which you can use very close to people,” says Ted Walker, president of Miami-based Add Fire. Besides being able to “move up close and have really dynamic effects that are quite safe,” Walker adds, changes in ignition from matches to mostly electronic procedures allow for more precise choreography.

Some of the most successful special effects have no sizzle or bang, but instead are used to create or evoke an atmosphere. “We did a rainforest event [that] was decorated with a large amount of natural greenery, but we added ambient soundscapes of rainforest birds and frogs … and also low-lying fog,” Anderson says. “It was a total environmental special effect.”

This type of effect, he says, is particularly successful at reinforcing a theme or message. “[That] event was a meeting about diversity at a company,” he explains, “so we also produced a corporate video all about the diversity of the rainforest and how that's similar to the diversity in a healthy company.”

WOW! Works in Clermont, Fla., is another company that is picking up on the ambient-effects trend. Bettina Buckley, chief effects orchestrator, is particularly excited about scent technology, which allows clients to “have a birthday cake smell, or, if you want, the smell of a burning fire, or a rainstorm.” By controlling the introduction of aromas into an environment, she says, “you have another way to entice an emotional reaction.” According to Buckley, the effect is most commonly used for high-end corporate parties, but will become popular on a broader scale as clients discover that it is available and affordable.

“We are a company that will make custom die-cuts,” says Drake Diamond, CEO of Confettiwerks.com in Agoura Hills, Calif. “If a person wants confetti in the shape of a coffee cup, they can contact us and we will make coffee cup-shaped confetti.” Hand-held confetti launchers enhance the personal experience by letting guests participate in the action, Diamond adds.

Personalized effects are ideal for social events, too. Walker points out, “If you saw fireworks that said ‘Happy Birthday [name],’ it would be the best show you ever saw in your life.”