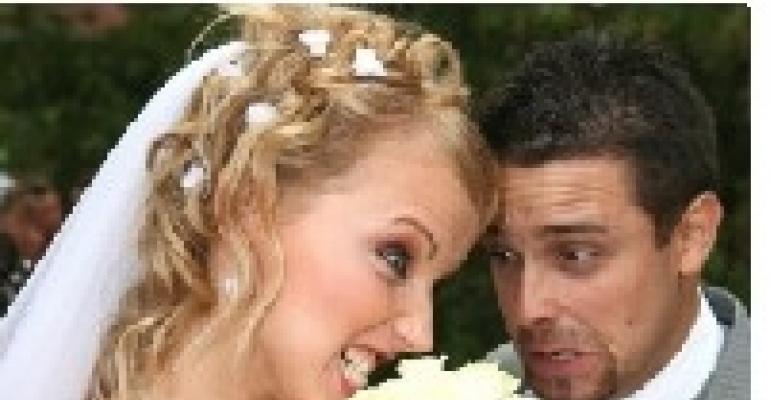 You, Me and MTV: Shows Influence Event Clients

Event planners today find they often have a not-so-silent partner in planning events. It's not the mother of the bride or a busybody CEO--it's an event-based TV show.

Clients "absolutely" base their expectations for their event on TV shows, says Chicago's Frank Andonoplas, MBC, head of Frank Event Design. Particularly popular among his wedding clientele are the programs "Whose Wedding Is It Anyway," "Platinum Weddings," "Bridezillas" and "the one-timers like 'In Style Celebrity Weddings,' which appear once a year," he explains.

Sheldon Sloan, director of sales with South San Francisco-based Melons Catering, notes that even shows not directly based on special events can have influence. "'Dancing the with Stars' seems to have renewed interest in ballroom dancing," he says. "All things Hollywood are popular, from celebrity look-alikes to red carpets and so on." The bar and bat mitzvah market in particular goes for themes based on reality shows and hit movies, he says.

Carolyn Arthurs, founder of All About Events with offices in New Orleans and Los Angeles, has appeared on the MTV phenomenon "My Super Sweet 16" and says, "I have noticed that the younger clients for bat mitzvahs, bar mitzvahs and Sweet 16s are often referencing what they've seen on the show."

The influence of TV shows reaches the corporate market as well. "'Deal or No Deal' is very popular--we have been asked to take that premise and make an interactive team-building event based on that show," notes David Merrell, head of L.A.-based An Original Occasion. "As well, 'Lost,' 'Fear Factor' and 'Survivor' are the themes that clients ask to be created with an interactive element for their attendees." The granddaddy show for corporate events: "'Jeopardy,'" Merrell says. "The question content can be specifically changed to a client-specific product or product line."

The problem with the event-based shows in particular, planners agree, is they set unrealistic expectations about budgets. "Many do not show the price tag associated with the over-the-top" events, Andonoplas notes.

Her bar and bat mitzvah clients "have to know going in that what they see on the shows is expensive to produce," Arthurs says. "However, I find that with that particular demographic of client, they usually get what they want." What's the craziest thing a client enamored of TV shows ever asked her for? "She wanted to be followed by a pink spotlight the entire night," Arthurs says.

Another quarrel planners have with event-based reality shows in particular is how the editing distorts reality. "I have to let [clients] know that the order of certain things and the way that things are shot will affect their perception of the event," Arthurs explains. "From being a part of MTV's reality show as well as working with another show on TLC, I know that what they say and what's really happening are drastically different."

On top of that, TV shows sometimes prove the adage that a little learning is a dangerous thing. "I blame [TV cook] Rachel Ray for teaching people to open cans and use pre-grated cheese--if you can call it cheese," grouses Lee Gregory, head of San Francisco-based McCall Catering. "I might blame the Food Network for creating a community of people who think they are food experts. But all they really do is watch other people cook."

Beyond that, though, Andonoplas says he doesn't find that the shows lead clients to make consistently outrageous requests. "If what [the clients] want is not affordable, not realistic for space, or just plain not going to happen in Chicago, I always try to find an alternative," he says.

Indeed, Andonoplas himself has his Tivo DVR "set for 'bride,' 'wedding' and 'weddings' so I can see what is out there," he says.

The one program several social planners say they would banish from the airways if they could: "Bridezillas," which documents the outbursts of bratty brides. "I hate that they show all that can go wrong in an event," Arthurs says. "That makes brides expect the worst and panic for no reason."

HOW HARD CAN IT BE TO PLAN PARTIES?

Andonoplas' other pet peeve: TV shows that make the job of a planner look easy. "There was a series that died quickly, called the 'Wedding Belles,' about a team of three sisters who ran a one-stop ceremony/reception/we-can-do-it-all-from-catering-to-flowers-type facility," he says. "When they were not sleeping with the vendors and dealing with their own baggage, it was, again, completely unrealistic. They don't show how hard it really is to do what we do."

Finally, a legacy from planner shows that Andonoplas could do without: "The daily call I get--seriously--for someone wanting me to 'take them under my wing' and teach them how to do this because it looks like fun. They need to stop making this look like a glamour job. Again, editing!"