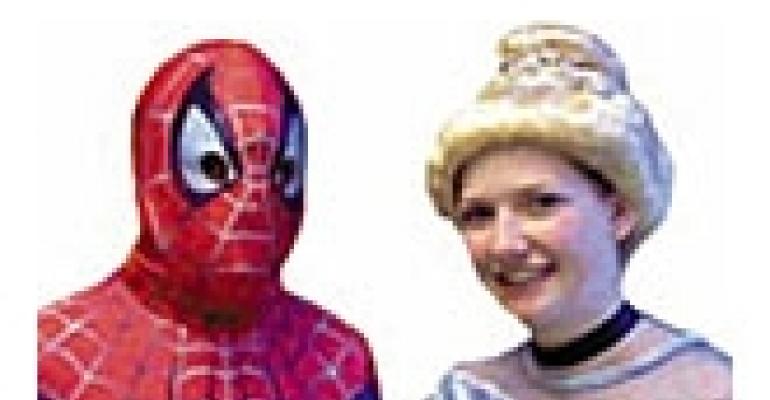 THE YOUNG & THE REVEL ROUS

THINK YOUR AVERAGE well-heeled corporate event crowd is tough to please? Well, how about a roomful of peppy preschoolers on a full-blown sugar high? Or a dance floor dripping with teenage ennui? While they may not know filet mignon from frankfurters, children make for demanding and opinionated event attendees. That can mean both a challenge — and a source of supreme satisfaction — for those event pros who make kids' stuff their business.

With nine years' experience as both a preschool teacher and party planner, not to mention a background in early childhood education and theater, Amy Rubenstein has the professional chops to put most parents at ease. But it's not just experience that sets four-year-old Wheeling, Ill.-based Creative Celebrations — the children's event-planning company Rubenstein operates with husband Neil — apart from competitors. “We do specialty parties that nobody else does,” Rubenstein says.

Best-sellers among Creative Celebrations' custom-created themes include Messy Fun, a party Rubenstein calls perfect for the fussy four-year-old set. “Kids make chocolate-scented Play-Doh, Smelly Slime and something we call Magic Matter,” she explains. Recipes go home with the kids, along with new skills and a sense of accomplishment.

Popular for even younger tots is Music in Motion, a circle-time setup where kids are introduced to music through the use of props, puppets and flannel-board stories. Interactive elements include a musical parade and popcorn-making.

To keep young guests engaged, Creative Celebrations limits most party packages — whether Beauty Shop, Creepy Crawlers or Chocolate Factory — to an hour, although events can run longer on request. The team also makes sure to have a range of activities in each event arsenal, in order to switch gears according to guests' energy level and attention span.

No matter what party parents pick, Rubenstein makes sure it's the best one for the group. Cautioning parents against clowns for very small children is a common case. “I am a professional clown. I'm also 4-foot-9, and although my clown character is inviting and non-threatening, there are kids that age that are just scared of clowns,” she says. “I'll suggest that at this age, it might be better to engage kids with singing, dancing, etc.”

Requests for costumed cartoon characters can pose another problem. As Neil Rubenstein points out, “While we will do characters like SpongeBob, we try to be honest and let parents know that there are a lot of things those characters can't do because of the size of the costumes, which give them limited mobility. We pride ourselves on interactivity. With characters, most of the time all [they] can do is show up.”

As kids mature, their parties have to grow up, too. But that doesn't mean catapulting young guests from balloon animals to bar stools before their time. Bobbie Yarrusso, whose Wilmington, Del.-based Creative Event Designs by Bobbie includes a division dedicated to youth events, says setting the proper party tone is most difficult with kids that fall into the tricky 8- to 12-year-old “'tween” category.

Key to entertaining these not-quite-adolescent youngsters is understanding both the tastes of each guest of honor and the tendencies of the age group as a whole.

She points to a birthday party she recently produced for a nine-year-old boy with a fanatical interest in the U.S. Civil War. While such a fascination may seem unusual for a fourth-grader — not to mention problematic for a planner trying to create an event for guests who might not share their honoree's quirky obsession — Yarrusso turned the child's fixation into a fully interactive event experience. Themed party activities included a small-scale Civil War reenactment plus a demonstration designed to show kids how Americans cooked and crafted goods in the 1860s.

In other instances, a more general theme can help set the mood for typical 'tween interests: “They're into food, hanging out, a little dancing — but often they don't like to dance in front of each other,” Yarrusso notes. One foolproof thematic choice? “A Hawaiian luau,” the planner says. With Hawaiian music, island-themed decor and slightly silly but still retro-cool activities like a Hula Hoop contest and pink-flamingo ring toss, “It's very laid back,” she explains. “They get to act goofy and play along. It's fun for any age.”

While many quinceañeras stick to tradition, with choreographed presentations of the quince's “court” and formal dances between the 15-year-old girl of honor and various family members, diversity of cultures makes for a variety of entertainment choices. “If it's a Cuban family, we might do traditional Cuban music. If the family is from South America, we might do a waltz, which is very popular there,” says company president Jorge Hernandez. Also hugely popular among teen guests: “reggaeton” — the hot Puerto Rican musical hybrid that blends Caribbean reggae with hip-hop, salsa and bomba rhythms. “The kids are really into it,” Hernandez says. “But it has a very contagious beat. It's great for the whole family.”

Along with unconventional music are other nontraditional elements that are fast becoming must-haves in the standard quinceañera entertainment package. “They want video. A lot of video. MTV-style videos,” Hernandez says. To satisfy his clients' desires, he screens videos on large monitors, interspersing MTV fare with a live feed from the party's dance floor.

No matter what entertainment his team provides for its burgeoning youth market, Hernandez makes sure it's not just cool but also audience-appropriate. “Today's music is rough around the edges,” he notes. “We're using something we call ‘lyrically correct’ music.” The company subscribes to a service that provides edited versions of popular songs for use at events. On top of that, Hernandez keeps a close eye on dance floor antics to keep the tone a tame PG rating. “If you see a big group of kids herded around in a circle, there's probably something going on in there that shouldn't be,” he warns. “If we see that happening, we'll switch the music right away.”

‘Create Your Own Favor’


Take-home Tip: Not only is this one of the most popular favors Creative Celebrations offers, but it can be a revenue-generating add-on to a company's standard theme package.

“In a world where Madonna studies Kabbalah, it's suddenly cool to know something about your religion, and to integrate ideas and mysticism into your celebration.” So says Gail Greenberg of the Web's top-rated bar and bat mitzvah site, Mitzvah Chic (www.mitzvahchic.com), and author of the book of the same name. Here, the mitzvah maven shares pointers with planners for keeping the spirit alive at the Jewish coming-of-age event.

DO give giving the spotlight. To encourage charity — a traditional component of the mitzvah experience — insert tree-planting certificates from the Jewish National Fund into invitations to give guests a chance to make contributions on their own. Another option: offer conservation-conscious party favors, such as beautifully packaged chocolate bars from makers that contribute proceeds to saving endangered species.

DO riff on the reading. Turning the honoree's Torah portion into a thematic event element infuses the fun with meaning. If the Torah reading is about sending spies into the Promised Land, for instance, create a spy-themed activity for the reception where young guests can make invisible ink out of simple ingredients. For party favors, give out handheld blacklights the kids can use to reveal hidden messages they've written.

DON'T play favorites. By singling out some guests, a ritual candle-lighting ceremony can divide the group into A-list and B-list attendees. If your client is set on the ceremony, suggest including only family — instead of family members and certain friends — to avoid hurting anyone's feelings.