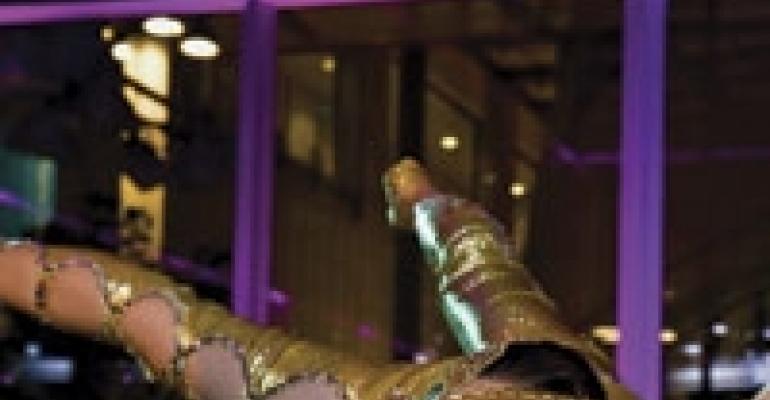 Adobe Systems' November customer-appreciation event in San Francisco had more than one thing going for it — in fact, it had two. Staged at the new California Academy of Sciences and adjacent de Young Museum — two landmark Golden Gate Park buildings separated by a public lawn — the annual bash stood to benefit from being held at two of the city's most noteworthy venues. All that San Francisco-based event production firm Branduin Creative had to do was figure out how to create a cohesive environment out of the spread-out site and get 3,000 designers and developers to go with the flow. With 20 years' combined experience, the team — led by Branduin president Bree Shapiro, creative director Molly McDaneld, producer Elizabeth Bainbridge and business development director Todd Benzies — did just that.

Branduin welcomed the many possibilities offered by the remarkable venues — one a state-of-the art “green” site designed by Pritzker Prize-winning architect Renzo Piano, the other a revamped classic created to showcase priceless works from the Americas, Africa and the Pacific. But the team knew it had its work cut out for it.

Most notably, “Our client was very concerned that the party would feel disconnected, and guests would just stay in one venue,” Benzies recounts. To overcome this obstacle, Branduin focused on a “music concourse” between the two sites, lining it with a series of 12-foot-high illuminated cones that drew attention to the main entrances of each venue. For guests who preferred not to walk the distance between the two — “or just wanted to try out a quintessential San Francisco ride,” notes McDaneld — a system of faux “cable cars” offered an entertaining alternative.

In addition to bright lights and big cones, Branduin appealed to the techie guests' interests with an ingenious “texting game” designed to help attendees circulate throughout the event's many themed areas. During the course of the game, guests encountered signs at different points in the venues instructing them to text codes on their cell phones, in response to which they received multiple-choice questions related to the client and the museum venues. Winners of the game snagged copies of Adobe Creative Suite 4 design software. “People were actually running around really trying to win,” Benzies notes. “At the end, over 2,000 questions were answered. That far exceeded our wildest predictions for the success of this game. And, given the smooth flow of the event, it worked!”

Along with the venues' physical distance from one another, the fact that the sites are public museums posed challenges for the design and production crew.

According to McDaneld, the last public visitors of the day weren't out until 5:30 p.m., which left the Branduin crew and its vendors a mere two hours of setup time until the event's 7:30 p.m. start. With this limitation on event options, “We had to think strategically,” McDaneld says. Without time for sound checks and stage setup, for instance, “We knew we couldn't bring in headline talent,” she explains. Instead, the firm recruited less well-known bands offering a fusion of traditional global, ambient and world-beat music, along with top Bay Area DJs spinning dance music — an ideal mix for the international crowd.

Easily installed interactive entertainment with a limited footprint also figured into the lineup. Among the most popular diversions was “Mindball,” provided by Quebec-based NovelQuest. The game, which involves players wearing headbands with electrodes connected to a biosensor system, measures brain activity as the players follow the movement of a ball rolling on the Mindball table. As Benzies explains, the object of the game is to relax, rather than get excited about the progress of the ball. “It's counterintuitive,” he explains. “Your natural instinct is to get your adrenaline going. Here, you need to do the exact opposite.” The cerebral Adobe crowd, he notes, loved the challenge.

While limited access to the venues required savvy production measures, the museums' inherent aesthetics provided a unique design foundation. McDaneld notes, “We didn't want to junk up the space” with excessive decor or thematic elements that were antithetical to the existing surroundings. Instead, the Branduin team took advantage of spaces such as the Academy's African Hall, with its fascinating animal dioramas, accentuating the area with earth-toned furniture and floral, a zebra-print rug, deep amber lighting and an African band.

Transported by text messages, moved by mind games and filled with international fare from San Francisco's Global Gourmet Catering, Adobe's grateful guests couldn't help but enjoy the event. Benzies notes that attendees gave the event a 4.39 out of 5 points in a post-event survey, up significantly from the previous year's score. “Our client was thrilled,” he says.

Still, given the event to do over again, the Branduin team says it might make a few changes, namely increasing signage, providing more “characters” to guide guests and supply necessary event information, and, most notably, staging entertainment in the concourse area. “We initially saw it as a walkway,” McDaneld says of the venue-connecting space. “But guests really enjoyed it, and it could be a great space to fill out.”

Events from Pitch to Production