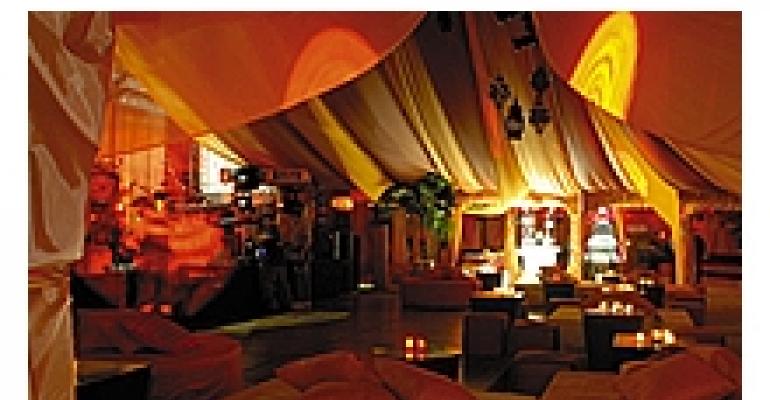 THERE'S nothing like New York's annual Fashion Week to get the blood of style mavens pumping. And there's nothing like Fashion Rocks to kick off the city's weeklong celebration of design innovation. Curated by Sir Elton John and featuring music superstars including Beyonce, Faith Hill and Kanye West, the concert and awards show is an extravaganza of talent and taste-makers. So when Richard Beckman, president of event sponsor Conde Nast Media Group, geared up to plan the Sept. 7 concert's 1,500-guest after-party, he knew he had a tough act to follow. That's where New York's EventQuest entered the picture — bringing with it a familiarity with event venue Rockefeller Center, nearly 15 years of production experience and a whopping 12,000 square feet of sisal carpet.

In fact, the vast span of sisal was just one small part of the eclectic Moroccan-Parisian design scheme EventQuest executed at the multilevel venue, notes creative director Mark Veeder.

Using as its inspiration the well-traveled Beckman's appreciation for the African country's culture and furnishings, Veeder says EventQuest's major challenge lay in bringing Morocco's warmth to Rockefeller Center's ice rink and environs. “We had to completely redesign and basically hide the space,” he explains. And, he adds, his team had to do so in a venue where “there are only certain ways things can be done.”

The most confining of the restrictions, Veeder says, regarded tenting. To make the most efficient use of the event area — which included the ice rink, the Rock Center Cafe and the Sea Grill restaurant — and to provide sufficient space for red-carpet entries, food and beverage, and VIP hobnobbing, EventQuest was forced to use three individual tents, supplied by Rockefeller Center's exclusive tent provider.

Unfortunately, Veeder says, the tents' minimal height — the tallest was 12 feet at its topmost point — didn't allow for much in the way of grandeur. With taller tents, “We could have had 100 lanterns come down in a cascade, which would have been stunning,” the designer notes. On top of that, with three individual structures, Veeder says he could not achieve the uniform tent profile he would have liked along Rockefeller Center's upper level arcade. “In my dream world, I would have done a custom tent that was one structure, all the way, sitting up on top of the walkway,” he muses.

Nevertheless, the EventQuest design team made the most of a difficult setup by going big and bold with colors and surface textures. Tent interiors got an authentic Moroccan touch from draped saffron- and spice-hued fabrics along with hanging lanterns, hand-painted doors and copper tables. Coordinating chaises longues and ottomans made for an exotic lounge vibe. Most thrilling of all for guests, Veeder says, were the “huge Buddha ice sculptures” — inspired by Paris' ultra-hip Buddha Bar — “which weighed about 1,000 pounds each and were uplit to denote entrances.”

Of course, with designer fashion at the fore of both Fashion Week and the Fashion Rocks after-party, grand branding was a must. That meant foregoing simple signage in favor of more artful expression, Veeder says.

The designer cites EventQuest's creation of a “free-standing wall with a long seating area,” used to communicate sponsor brands and provide visual movement. He explains that his team embedded the wall with screens set into ornately framed mirrors. The screens, provided by high-end television mirror manufacturer Seura, “look as if they are regular mirrors when the screens are off and as if they are floating video when they are on,” according to Veeder. With their combination of sponsor video images, footage of red carpet arrivals and still art from the Fashion Week print supplement, the screens became a focal point that “embodied the whole spirit of the party,” he says.

When they weren't actively engaged in star-gazing on-screen and within the party crowd, event guests enjoyed a Moroccan-themed buffet from New York's Restaurant Associates, featuring such savory mouthfuls as chicken tagine with chickpeas, apricots and honey, and couscous with minced vegetables, preserved lemon and fresh mint.

For Event-Quest, not only was it a pleasure to work once again with Beckman, who had been a company client in his former role with Conde Nast's GQ magazine, but it was a triumph to deliver such a high-stakes to-do “on time and on budget, even with extremely tight deadlines,” Veeder says.

Veeder attributes his team's ability to achieve what it needed to with a mere month of lead time to its efficient use of resources. As an example he points to savvy selection of fabrics — a major component in the event's design. For tent interiors, draping materials were low-priced synthetics, cleverly lit, while seating upholsteries were genuine silks and beaded or embroidered fabrics. “When it comes to things that are out of reach, just for effect, there are lots of ways to do that inexpensively,” Veeder says, “if you have a great lighting designer who can make it come to life.”

A TASTE OF MOROCCO