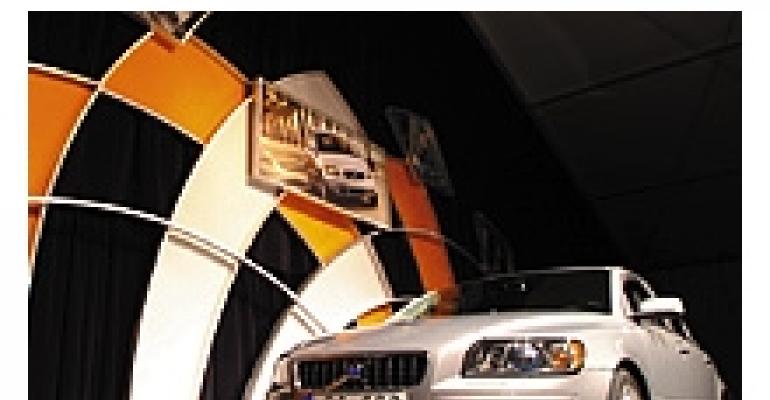 WHEN BUYING A car, customers buy far more than four wheels — they also buy an image. And when shifting markets demand a shift in that image, special events are in the driver's seat.

AMCI stalked the affluent, elusive 20-somethings by going to their lair: music retailer Virgin Megastores. The nationwide chain of hip outlets represents a brand that already has an established relationship with Generation Y, and the customer traffic per store is a whopping 3 million people a month, according to AMCI estimates.

AMCI commandeered a presence at the stores by placing the new car in the open-air courtyard at the entrance to selected outlets. Passersby could enter a sweepstakes to win a trip for four to London and Sweden along with a car. While collecting the sweepstakes entries, Volvo representatives also pulled in data from entrants on hand-held PDAs, adding to the cutting-edge image Volvo was searching for. In exchange, entrants received a free CD loaded with an eclectic mix of contemporary singles, including a lead track by rising star Gavin DeGraw. Inside the stores, a flashy kiosk featured a spinning hologram of the S40. Here, prospects could sign up for a ride-and-drive within the same metro area two weeks later.

The music link continued at the driving events, where a buffet and product information were backed by Jumbotrons playing a steady stream of music videos. A live concert by DeGraw concluded the final nighttime event, a “glow in the dark” ride-and-drive featuring glowing necklaces and bracelets for drivers, a Volvo-branded Airstar balloon, and searchlights giving a “movie premiere” feel.

According to AMCI's data, along with garnering millions of impressions at the Virgin Megastores, 20,000 potential buyers opted into the sweepstakes and requested additional product information, and 6,000 participated in the nine ride-and-drives — “an impressive response given this audience's built-in bias against mass-market overtures,” Burke notes.

How to crack Europe's competitive auto market with a product powerful enough to play the game — this was the challenge for the first-ever European dealer convention from Japanese automaker Mitsubishi.

The 12-day convention — staged in Andalusia, Spain, in February 2004 — required event producer Vok Dams Group to motivate and inspire the 3,500 attendees with the belief that Mitsubishi was on the ascent. Keying on the theme “Moving On Up,” the event team developed the theme using a red ball in conjunction with the automaker's corporate logo, symbolizing movement, flexibility to seize opportunities, and initiative to leave the beaten path.

Wuppertal, Germany-based Vok Dams relied upon movement — moving attendees from room to room, dynamic moving laser presentations, and, of course, a demonstration of cars on the move — to engage and inspire the dealers.

The convention's highlight and touchstone of the new corporate strategy was the presentation of the new Mitsubishi Colt at the end of the first convention day. The next day, attendees participated in four workshops within a tight rotating system to discuss the next steps in implementing the marketing strategy. Finally, the “Mitsubishi Racing Winners” road rally revved up dealers.

The event required some quick movement on the part of Vok Dams — only weeks earlier, terrorist bombings in Turkey, the original venue, prompted the relocation of the convention to Spain. “We sent out faxes and told the guests, ‘Stick with the date; we will find an alternative destination,’” reports Vok Dams CEO Colja Dams. “And we did.”

For some brands, the challenge is not repositioning, but making a long-standing image compelling once again. The Event Co., Based in Munich, Germany, faced just such a hurdle last summer when the company was called upon to unveil the new BMW 1 series for 500 key account customers — fleet managers and buyers for large German corporations.

The 1 series represented a breakthrough for BMW — the first-ever compact model from the high-end automaker. And the fleet managers represented a jaded audience, long-accustomed to being wined and dined by automakers.

To shake up their complacency and reconnect them emotionally with the high-performance brand, The Event Co. created a dynamic event that kept both guests and cars on the move. The event, created with only four weeks' lead time, earned the Gala Award in January for Best Corporate Event: Overall Budget Above $500,000.

On each of four Saturdays last summer, The Event Co. invited 125 guests to a refurbished terminal at Munich Airport at 6:30 p.m. Along with the predictable — aperitifs, finger food and speeches from BMW executives and engineers — the guests were treated to the unpredictable: a helicopter flight to a nearby airport. The 14 VIP helicopters constituted the largest fleet ever to take off from Munich.

Once at the airport, the event stayed on the move. Guests viewed a huge numeral “1” created by a synchronized driving display using 16 cars; the fleet then executed a series of flashy maneuvers, underscoring the pure automotive excellence behind the brand. Guests enjoyed champagne and an opportunity to chat with BMW experts before flying back to Munich for a party that didn't stop until 3 a.m.