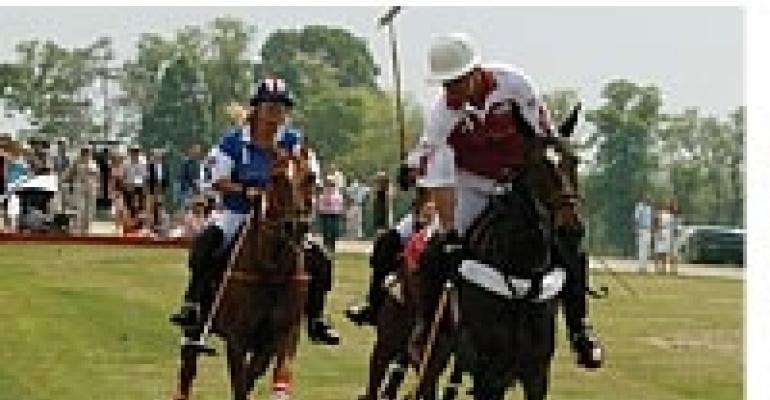 Cup of Polo Event is Horseplay

In May, Washington-based DMC CSI coordinated the activities surrounding the inaugural America's Cup of Polo match in Leesburg, Va. The spring day's performances included spectacular shows such as the U.S. Navy Blue Blaster flyover, parachute jumpers and a performance by '80s headliner Journey — a roster that required many days of planning by CSI. Celebrating the 400th anniversary of colonists settling in Virginia, the main event — a polo game between the U.S. and the United Kingdom — took place on a field ringed with white tents.

CSI organized the 5,000-guest event and its supporting activities, which included wrangling 100 volunteers and 180 vendors. As an added challenge, the entire event came together in only 41/2 months. “A program of this size and scope typically requires a minimum of 12 months' planning time,” says Jill McGregor, CEO and founder of CSI.

As the first-ever game, the polo match required many meetings to finesse the finer points. “There was so much to do to get it going for so many people,” McGregor says. “All the permits and security, working with the Loudoun County government, and just establishing all those new relationships.” To ensure audience safety, CSI met with many agencies to hammer out the details, including the Office of Emergency Management and the Loudoun Fire and Rescue Division. To keep all parties in the loop, “We held smaller individual meetings, squared things away with each office, and then we all met as a whole,” McGregor explains.

The persnickety planning paid off with the event's opening sequence: a dramatic parachute drop. McGregor notes it took months of tie-down meetings to set the stage for the crowd-pleasing spectacle, where Journey played “The Star-Spangled Banner” as the parachutes glided down accompanied by red, white and blue smoke. “It was the most patriotic, unique event that we'd ever coordinated,” she says.

Since forecasters predicted thunderstorms for the big day, contingency plans included a severe-weather strategy. “If there was severe weather, we would have had a formal announcement giving guests notice to return to their cars,” McGregor notes. Fortunately, “It turned out to be a beautiful day; our prayers were answered.”

Next year's event will feature a polo game between the U.S. and Italy along with a fashion show. While CSI will not be able to participate due to scheduling conflicts, the company's careful plans from this year means next year's crew is ahead of the game.