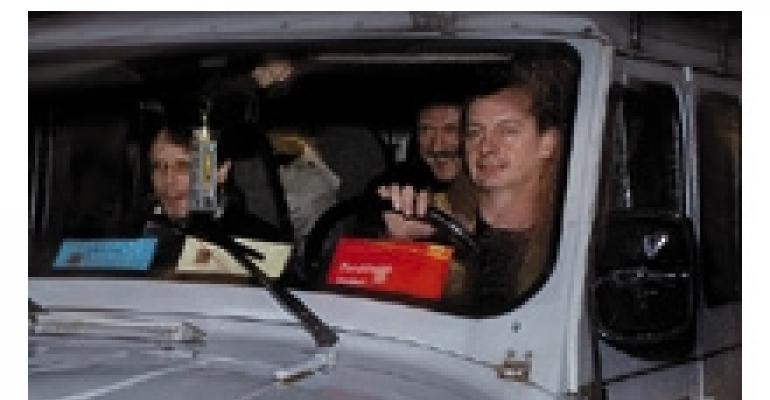 THERE were no shuttles, no relaxed breakfasts and definitely no frills when Wiesbaden, Germany-based Circ Corporate Experience GmbH & Co. sent 1,000 of client E.ON Energie AG's managers to chilly Varna, Bulgaria, for three days last November for Group Conference 2005. The event turned the traditional high-level business conference upside down, forcing executives to gain new perspectives by exposing them to Spartan situations instead of pampering parties. In the bargain it picked up a Gala Award nomination.

As the easternmost outpost of the region served by energy supplier E.ON, the locale effectively established the meeting's motto “Surpassing Boundaries with Energy.” That slogan became a reality thanks to the activities afforded by the extreme environment. “Instead of being looked after from top to bottom, {attendees} had to take the initiative themselves,” explains Michael Leroudier, Circ's executive director.

In lieu of a cushy shuttle service, the managers split up into groups of five and drove themselves in Cold War-era cars from the airport to the coast following signs in Cyrillic, making it difficult to find the way, Leroudier explains. The drive through 128 regions scouted by Circ four months before the event served to “familiarize {the managers} with people, their lives and their work. The local baker. The university director. The carpenter. The manager,” he says. Armed with a translator, Polaroid camera and 20 levar, the managers tried to ascertain what the locals expected from their energy company.

Since “rediscovering oneself was the order of the day,” according to Leroudier, the atypical conference activities aimed to jump-start guests' personal discoveries included a group swim in the wintry Black Sea. Another, mellower activity involved meditating in “a special atmosphere of an old monastery set in caves,” Leroudier says.

E.ON Energie AG is Europe's prime supplier of electricity and gas, a position it achieved after only five years, Leroudier relates, “in an unparalleled success story.” In a fitting end to the conference, which was constructed around the company's concern that success “can lead to contentedness and even lethargy,” the finale of the conference saw attendees in a tent on a Black Sea beach listening to E.ON CEO Dr. Johannes Teyssen, who asked his managers to make use of “the new openness in your minds.”

This was the second time Circ crafted the meeting for E.ON Energie. “Circ did the conference two years before at a traditional resort in Munich, Germany,” Leroudier recalls. But this time around, the team from Circ broke down some boundaries of its own.

In addition to creating a meeting in a country that had never had a “corporate event of this size and quality before,” Leroudier relates, another challenge was “providing 90 percent of all services using 650 Bulgarians, of whom only one in 20 spoke English or German.”

Despite the complications, Leroudier says, “All those involved were proud of having played a part in making a success of the biggest corporate event ever staged in Bulgaria.”