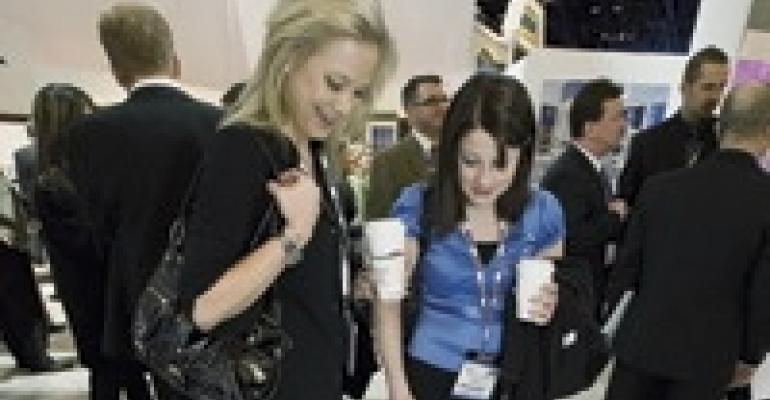 At the Kitchen/Bath Industry Show in April in Chicago, some 40,000 appliance dealers and distributors entered a world of cupcakes, a nod to the huge TV and print ad campaign featuring actress Kelly Ripa as “Cupcake Queen.” Seamless wall monitors played the new commercial, and a “Shimmer Screen” tower of 46,000 strands of steel beads created a showcase for wine goblets, a reminder of the company's new “wine tower” wine storage system.

Exhibit staff baked and frosted cupcakes, creating tantalizing sights and smells. Attendees could remove the cupcakes from the ovens themselves to add their own toppings, which let them experience the ovens' high-end gliding racks and easy-close doors. Guests could also fetch water and ice cream out of Electrolux refrigerators and freezers, showcasing the units' special lighting system that slowly illuminates interiors.

One of the major ingredients in the exhibit's success? “We had a budget!” Czarnowski senior account executive Ava Ritter says. “'Nuff' said!”

To help consumers experience a new high-end liquor brand, one event team created its own art movement. Working with client Bacardi to promote its new premium Rubi Rey rum, Alexandria, Va.-based RedPeg Marketing established the “86 Collective” campaign. Running in June and July, this salute to digital art combined an interactive Web site — where visitors could create their own digital works — with gallery exhibitions and private parties at nightclubs in Chicago, Denver and Miami. The Web site invited consumers to join the collective and RSVP for the events.

At the nightclubs, RedPeg created an immersive, high-tech experience for guests, who entered through mists created by FogScreens to find MacBook laptop computers. Guests used the laptops to shoot their self-portraits and then upload them into a huge, digital collage that played on club walls. For another decor element, the event team turned to cutting-edge technology Cheoptics 360, which creates 3-D revolving holograms suspended in midair.

Although the special effects were groundbreaking, RedPeg didn't use tech for tech's sake. “We sifted through 50 different technologies to hone down to those that were right,” explains RedPeg vice president and director of client services Mercedita Roxas-Murray.

Besides the exciting effects, the event team turned to traditional branding elements, such as signature cocktails using Rubi Rey and rum-infused food. “We challenged the chefs to use Rubi Rey within the ingredient list,” Roxas-Murray says. “It was a multi-sensory experience — smell, taste, hearing the music and being part of the photo mosaic.”

In the battle between High-Definition DVD and Blu-ray technologies to win the format war for future DVD production, the Blu-ray Disc Association wanted to show off its arsenal. At the Consumer Electronics Show in January in Las Vegas, the association did just that, branding its booth with all the studios and suppliers onboard with Blu-ray for the 140,000 show-goers.

Northridge, Calif.-based event marketer Paradigm Shift Worldwide helped the association create the bold booth. Although it's rare for competing studios to let their logos be intertwined, notes PSWW's Traci Altman, the event team persuaded five major Hollywood studios — all association members — to lend their logos and stills from movie franchises to the booth. Vignettes featured iconic movie props — such as the Silver Surfer from “The Fantastic Four: Rise of the Silver Surfer” — inter-acting with the Blu-ray logo. Characters from the cartoon “The Simpsons” sat in the booth's central meeting space, each holding a box of blue popcorn emblazoned with the Blu-ray logo. To educate show-goers on the benefits and future applications of Blu-ray technology, the booth offered a theater area with a 103-inch plasma screen; presenters covered major Blu-ray talking points. The result, Altman says, was “the feel of a modern theme-park environment.”

The booth won second best in show, behind tech giant Intel. And in an even sweeter victory, the association learned during the convention that its technology was the victor in the format war, bringing even more media to cover the booth.

Packaging manufacturer Tetra Pak is proud of the fact that roughly 75 percent of the materials that go into its carton packages are renewable resources. To spread the good word at the Natural Products Expo West in Anaheim, Calif., in March, Tetra Pak worked with Czarnowski to create a “green” booth made with 80 percent recycled materials.

Along with natural elements such as bamboo and other live greenery, the booth featured a curtain wall made from Tetra Pak cartons. Other recycled elements included recycled plastic “lumber” and carpeting. Energy-efficient LED lighting cut power use. “We used everything from environmentally friendly stains and sealer to milk plexi, which is created from recycled milk cartons,” explains Czarnowski account executive Tim Hamann. All materials were purchased from local, “earth-friendly” suppliers to help reduce the exhibit's carbon footprint.