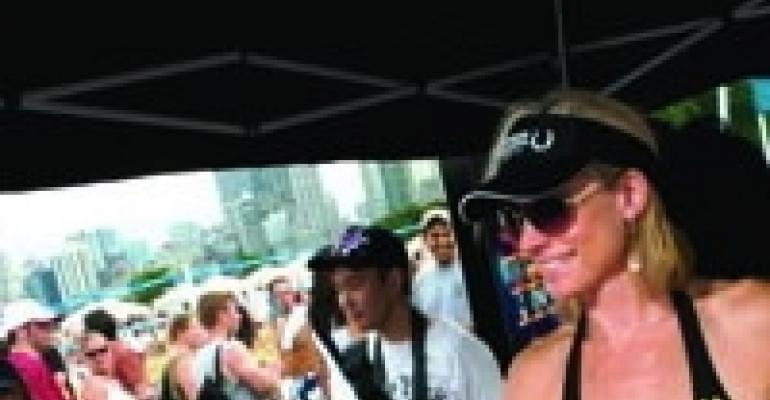 The good news: You are promoting the opening of the $500 million floating casino, the largest in the Midwest. The bad news: It will open Aug. 8, the same day as the start of the Summer Olympics in Beijing.

The media marathon was only one part of the complex event marketing plan, which started in March. Other elements included targeting various customer demographics — from younger newbies to older high rollers — and even drawing potential employees.

To reach a younger clientele, the event team turned to social networks, creating a Facebook profile and fan page for Horseshoe. Complementing the Web presence, the event team capitalized on the popularity of established Chicagoland events, including music festivals and major league games. At these events, Horseshoe brand ambassadors roamed among the throngs, handing out promotional offers to visit the casino.

To generate buzz with older customers, the event team staged an invitation-only VIP party at a Michigan Avenue penthouse. The event team created a high-end “Las Vegas” experience for the 500 guests, a turnout well over the 300-guest target.

Potential staffers enjoyed a VIP party of their own. The event team created a reception at a downtown Chicago nightclub where would-be workers could interview one-on-one with Horseshoe executives to identify their areas of interest. A total of 250 out of the 300 candidates in attendance completed job applications, a result that the Horseshoe human resources representative deemed a “huge success.”

TAKE THE MONEY AND FUN

Pinching pennies? No. Grabbing dollars? Yes! Consumers gained a new perspective on saving money thanks to the “Way2Save” tour, which visited 12 U.S. cities from February through June. In developing the tour, Charlotte, N.C.-based Wachovia Bank had three goals: to launch a new savings product, drive brand awareness and draw attention to the problem of low savings rates by Americans, all the while showing that saving money for the future can be easy and fun.

Ocean, N.J.-based Synergy Events helped the bank create a 60-by-80-foot event footprint. The space included a photo area, where guests had their picture taken and retrieved it via the company's Web site; a golf area, where consumers putted for cash prizes; and a “savings oasis,” where attendees received massages. At each tour stop, the event team gave away $2,000 an hour, or $10,000 total per day. To qualify for the money, consumers used an ATM machine to answer three questions about saving money.

Consumers who gave the right answers won the right to enter a money cylinder, where they tried to grab as much swirling cash as possible. The big winners from the small money cylinders qualified to enter the “World's Largest Money Machine,” the centerpiece of the tour. Modeled on the structure from the venerable “Hollywood Squares” TV show, the three-story, 20,000-pound machine let eight contestants at once make the grab for cash. The big machine required a crew of 40 to install and strike it at each tour stop. The structure was so large, it had to meet seismic standards in case of an earthquake.

The event team boosted media appeal by adding both celebrity and charitable components to the event. Celebrities and athletes, including actor and TV host Mario Lopez, donated the money from their stints in the Money Machine to worthy causes.

The lure of winning cash on the spot led to consumers standing in lines to try to qualify to enter the money cylinders. To keep tempers from flaring, the event team switched from using ATM machines to qualify contestants to equipping roving brand ambassadors with handheld devices to quiz attendees.

The tour ended June 5 with a visit to New York's Bryant Park. Here, the top eight contestants who grabbed the most money from the tour stops vied for the grand prize giveaway of $50,000.

The best way to promote personal-care products? Get personal. The event team behind the “My Black is Beautiful” campaign took some of the biggest brands from consumer products giant Procter & Gamble directly to consumers in a celebration of the African-American woman's identity. On behalf of Carol H. Williams Advertising, P&G's agency, Chicago-based Event Architects created a traveling spa/salon experience in malls and convention centers in five major U.S. markets over the summer.

The large-scale events, which took place in the convention centers and at other big venues, keyed on the salon experience. Attendees could enjoy the services of professional stylists using P&G's Pantene brand hair products, Olay skin treatments and Cover Girl manicures accompanied by a relaxing massage. To safeguard their health, guests could also have their teeth examined by dental assistants and their blood pressure checked. Individual sinks gave guests the chance to taste-test various flavors of Crest brand toothpaste.

The three mall events — in Atlanta, Charlotte and Chicago — all on a smaller scale, served as teasers to drive guests to the main events. One of the greatest challenges of the mall-based events was the lack of electric and water lines needed to create the salons. By working closely with mall management, the event team was able to source local contractors to get the mini salons working.

The event team made the most of two huge events already primed to draw big audiences in the targeted demographic — the Essence Music Festival in New Orleans and the Alpha Kappa Alpha sorority convention in Washington. At both events, the team set up the tour elements, capitalizing on the crowds.

Other strategies that helped keep costs in check included use of a 53-foot semi truck, which served as the sole transportation to each location, and the reuse of fabric and lighting elements. Fabric tension walls in chocolate brown and staffers in teal T-shirts helped brand the salons while making the installation easy to move from city to city.