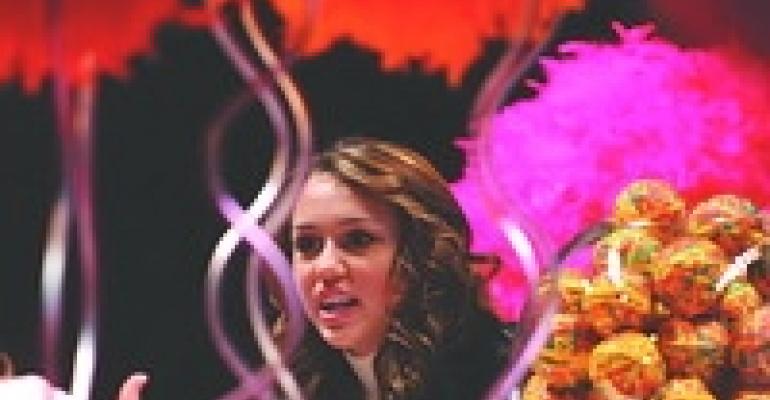 Events from Pitch to Production

How does an event start out in one place and end up in another? Slashed budgets, venue availability and revised goals can all be culprits. Here, four corporate event planners take us from pitch to party and from rendering to reality — sharing where they compromised with clients and where they held their ground.

Then the plan changed. The office supply chain expanded the event to a 4,500-guest employee morale booster — and a perfect opportunity to garner free press. With less than three weeks to go, the Meetinghouse Companies had to find a venue big enough to hold the crowd. The team settled on Chicago's Rosemont Theater, and Meetinghouse quickly prepared a stage rendering in 3-D CAD program Vivien, forgoing the usual detailed narrative and equipment list in order to meet the deadline.

MIDDLE GROUND: As the event expanded, the Meetinghouse team realized the budget needed to expand with it and persuaded Office Max executives to agree. Then the team pitched a more dramatic stage design that included white fur-covered couches, white spandex Transformit tension fabric structures lit in bright pink and vibrant orange, orange and hot pink feather balls, silver squiggle risers and a hot pink rug. “Our client was concerned about the stage set being too fluffy and not ‘corporate-looking’ enough,” Bailey says. “I convinced them that this was the way to go, and that it would not be as inviting and appealing to the audience if it was too sterile.”

FINISHED PRODUCT: The youthful stage decor still received some corporate touches — successful branding was a goal, after all. Vinyl “Office Max” logos on spandex squares positioned behind Cyrus ensured the logo was “in every camera shot at any angle,” Bailey relates. A custom gobo projected the company's name on the huge walls flanking the stage, and floral arrangements included rubber band balls, the Office Max symbol. “The colors of the flowers played off of the colors of the rubber bands, making these arrangements subtle advertisements as well,” Bailey notes. The rethinking of the event turned out to be a media-savvy move; it garnered 11 local broadcast and print stories, a posting on Yahoo and a segment on entertainment show “Extra,” Bailey notes.

MIDDLE GROUND: Sony considered focusing on a single film for the 600-plus-guest event, but to expand sponsor appeal, Starshot managing partners Brad Dalgarno and Brad Friesen talked the company into broadening the scope to include all the Sony Pictures Classics festival films. However, a single film still provided focus plus star power, in the likes of actors and attendees Jude Law and Michael Caine of the then-unreleased film “Sleuth.”

FINISHED PRODUCT: Starshot brought in the “Hollywood premiere” works, including a red carpet, a step and repeat, searchlights, and an Audi R8, which was parked on the red carpet and lit from below and above. Inside, Starshot “leveraged the cool decor of the [restaurant and club] Brant House — funky, cool bricks and beams — with velvet lounges and stone bars,” Dalgarno notes. And the team used “massive wall projections” to show Sony films on a loop.

STARTING POINT: The Branduin team kept their approach to this customer-appreciation event pitch for massive network-equipment company Cisco “casual and fun,” president Bree Shapiro notes. “It is a party we're pitching, after all.” Pitching materials included oversized foamcore artistic renderings, CAD drawings, music and gifts such as CDs of the proposed music. Ideas for Branduin's “adult sensory playground” concept included areas where attendees could watch Pink Floyd's “Dark Side of the Moon” synced to “The Wizard of Oz” or play the popular “Guitar Hero II” video game.

Branduin's idea beat out competitors' concepts, including a Los Angeles “Sunset Strip” idea as well as a “Morocco at the turn of the 20th century” theme. Cisco operations manager Heather Henderson, CMP, CSEP, says her company thought the interactive elements of Branduin's vision would energize the audience of 7,000 information technology experts and communications professionals, who were 98 percent male and aged 30 to 50.

MIDDLE GROUND: When the proposed venue fell through, Branduin booked an equestrian center in Del Mar, Calif., despite the fact it lacked the infrastructure of the first choice. To cope, the team reallocated some of the creative budget to build an infrastructure. This meant plans for a second stage of performers, Oktoberfest beer-tasting area and custom concert tour shirts were scrapped.

FINISHED PRODUCT: But attendees didn't notice anything missing. Branduin relocated a HeadSpace installation to the second stage, which projected attendees' faces onto a 5-foot scaffold structure with a 10-foot sculptured face. Guests' voices ran through a sound system, much like the great and powerful Wizard of Oz, for all to hear.

Guests labeled the July event a success, giving it a rating of 4.37 out of 5 in a survey.

COMING IN FROM THE COLD WAR

STARTING POINT: When BMC switched the destination of its corporate sales incentive trip from exotic Egypt to good old Washington, it was up to the event production company to keep the 80 guests from feeling slighted. CSI pitched an event that featured the new destination as “vibrant, creative, fun and anything but full of cold marble monuments that the guests hadn't visited since the fifth grade,” senior operations manager Kelley Gillespie says.

In its pitch, CSI relied on photos of existing venues to convey its vision. “The fun came when we decided to repackage our city's typical offerings with a new, but very retro, twist,” Gillespie explains. The team used the Cold War as a narrative backdrop to the five-day October incentive plan by highlighting such landmarks as the Watergate break-in suite, the Russian Embassy (with professional actors describing scandals from the Cold War era), a cruise on the presidential yacht U.S.S. Sequoia and a party at the National Air and Space Museum.

But the cuts provided at least one surprising opportunity. An original plan to hold a dinner at the Russian Embassy included two speakers: one a former CIA operative and another an official from the former Russian secret police and intelligence agency, the KGB. When the venue and speakers were scrapped, the National Air and Space Museum provided an outstanding substitute. The switch proved timely because the museum was in the midst of celebrating the 50th anniversary of the launch of Sputnik, the event that kicked off the legendary “Space Race.”