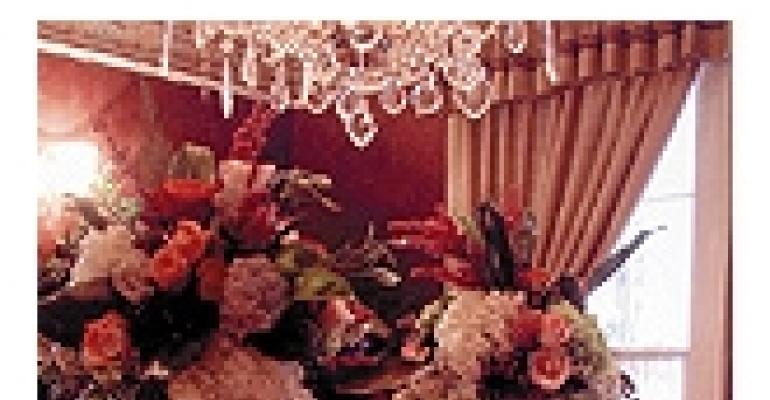 Galas: MMInc. creates a manly mood in an antebellum mansion

In an antebellum mansion, a feminine theme gets a manly makeover

"Moonlight and Magnolias": It was a wedding theme the Flint Hill team had executed many times before at the lushly landscaped antebellum home-one of three event properties owned by Norcross, Ga.-based MMInc. Properties. What the team had never done, however, was adapt the romance-infused concept to suit a mostly male, high-end corporate group. But when the property's sales manager sold her client on the concept sight unseen, that's exactly what the design crew had to do.

When she heard about the event her manager had sold, MMInc. co-owner Kendall Collier was a bit skeptical. "I thought, 'Moonlight and Magnolias,' for 40 people in this space, and it needs to be masculine ... OK ... " Collier says that her sister Kay Davis, who also serves as MMInc.'s lead floral designer, put it even more bluntly: "'You did what?' she exclaimed."

That's when the brainstorming began. "We really pondered for a few weeks, and came up with the idea of doing a Victorian conservatory in the lower ballroom," Collier recounts. The theme lent itself to the client-appreciation event's objectives of "conversation, and strengthening and building on relationships," she asserts. At the same time, it gave the design team options for turning what is normally a "kind of drippy, very romantic, very black-and-white" wedding look into something both rustic and refined.

The conservatory concept also addressed the problem of space-namely, too much of it. "This venue can hold up to 300 people. Keeping a group together is a challenge, even with weddings of 100," Collier explains. By filling the ballroom's corners with iron fencing and large foliage, and positioning a U-shaped dining table around an indoor fountain, the planning team was able to create a space of reduced scale and increased intimacy.

Before the evening's six-course dinner, guests got the chance to experience another one of MMInc.'s savvy adaptations.

This one-an hors d'oeuvre "station"-is a presentation MMInc. uses frequently, one the company developed as a way to make the most of pieces from its owners' extensive china and crystal collection in an efficient, visually appealing way. "When we first started catering, we used a lot of [our china] but we found out that it wasn't really practical. It broke so easily, especially on buffets," Collier says. As an alternative, she and MMInc. co-owner Teresa Day started using select pieces to set dining tables with place settings that feature plates of finger foods. Recommending the presentation to any caterer looking for a way to revamp a buffet, Collier says, "It doesn't take that much china, and the presentation is so self-contained. Things aren't scattered all over the venue-that's how they get lost."

For this particular event, the presentation featured vibrant red linens and metallic-accented runners, chunky cut-crystal goblets and sturdy bronze chargers. Plates were stacked on a nearby sideboard for guests to pick up and fill with pre-dinner nibbles as they circled the splendidly set table.

After enjoying their hors d'oeuvre sojourn, guest made their way through black velvet drapes into the conservatory. There they were seated at a table laid with Victorian-grape-pattern linen in shades of taupe, deep green, burgundy and rust. Centerpieces featuring distinctly non-feminine arrangements of magnolia leaves, fern fronds, artichokes, kumquats and Spanish moss playing on the linen's earthy pattern and subdued hues. And while candlelight was a must for the Victorian setting, "We didn't want wax dripping on anybody," Collier says. Mechanical candles did the trick, getting help from a coating of sage-green paint that further enhanced the garden atmosphere and lent a golden glow to an upscale Southern dinner of truffle-glazed squab and chops. With a nod to the theme's celestial side, the guest group gathered around tin-topped highboys for cigars in the moonlit garden before saying their farewells.

Like her California-based client, who refers to the March event as "nothing short of sheer magic," Collier counts the dinner, with its $18,700 decor budget, among the most creative and gratifying her team has turned out. She credits its success to her design staff's ability to adapt a tried-and-true theme to a challenging group and setting.

But whether her crew is rethinking classic concepts or creating entirely new ones-a Southern Exposure scheme, for instance, where guests "show up expecting 'Gone With the Wind'" and instead get an array of stations that play on the word South (think South of France, South of the Border, and oh-so-sophisticated SoHo)-Collier says the key is coherence. "I don't believe in doing things just to decorate, just pulling different ideas together. Everything has to relate, and it has to make sense for the client. That's the way you end up with a powerful event."