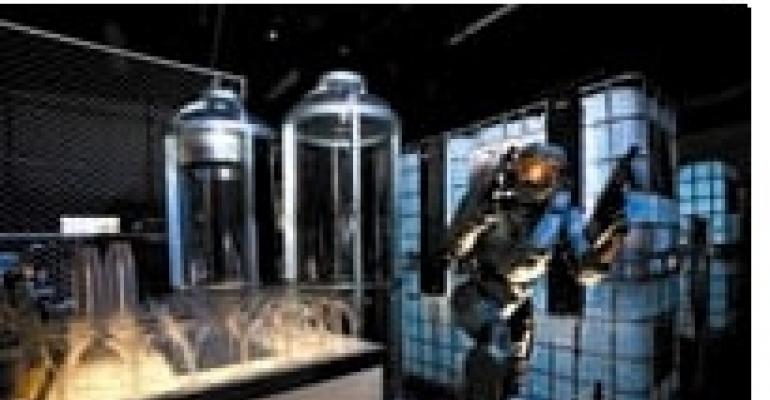 Buzz. It's what every marketing event pro craves and what every marketing event does its very best to generate. Double that for a beta launch preview of a third-in-a-trilogy video game with a huge following. But what happens when the pre-party buzz boosts the guest count by more than 50 percent over projections? And what happens when those guests are so excited that they descend all at once, hang out forever and party like it's 1999? These were the questions facing the staff of Venice, Calif.-based Zed Ink, designers and producers of the May launch of the much anticipated Halo 3 game, created by designer Bungie for Microsoft Xbox.

It's not that Zed Ink didn't come equipped for the $325,000 party. As the creative agency of record for the entertainment and devices division of Microsoft, according to Zed Ink executive creative director Julia Zarro, the company understood that creativity and connectivity were top priorities.

On the creative front, a design team led by Zarro and colleague Erin Hearne worked with Microsoft production and PR staffs to ensure that every aspect of the event reflected Halo 3's futuristic fantasy world.

Key event components included the Legends Tunnel, an entryway that featured printed and digital artwork, video, music and sounds of the Halo world. “We wanted to help draw attention to the stunning design, graphics and storytelling of the Halo games,” Hearne says. She describes the tunnel as a series of “environments of materials and locations inspired by Halo” that featured character art, vehicle designs, weapons, character armor, tools and environmental renderings.

Another highlight was a red carpet “that functioned as an environmental piece, as well as an opportunity for branding behind celebrity guests,” Hearne notes. Instead of a standard step-and-repeat backdrop, “We used a combination of scaffolding with various materials strapped to it to create a three-dimensional step-and-repeat and branding space and evoke some of the environment you'd see in game play.”

As for connectivity, Zed Ink producer Marc Buchan was all over it. He and production manager Johnny Camacho worked closely with partner LDM Engineering to bring 16.5 megabytes of bandwidth to accommodate live online game play in the event space at Hollywood's Quixote Studios.

Doing so was a challenge but “a fun one,” Buchan says. Without the four to eight weeks usually needed to set up the kind of Internet infrastructure required to connect the multiple game stations installed at the event, the production team set up a transmitter dish on a parking structure several blocks away, the producer recounts. That provided “a bounce point to get Internet from a larger supplier” and ensured that the night's game play proceeded with “not a single glitch,” he adds.

While Zed Ink was prepared for enthusiastic gaming, the team wasn't quite ready for the onslaught of guests who came out to play.

“I've never seen anything like it before,” Hearne says. “It was instantaneous and a ton of people.” In fact, 400 guests, rather than the 250 expected, attended the event, with 200 cars arriving in the first 45 minutes of the party — “more than we were expecting for the whole evening,” Hearne notes. Within minutes of the deluge, “the local sheriff and police department were there asking what to do about the line of cars,” Buchan recounts. “It's great publicity in one sense.” On the other hand, it can make for valet mayhem.

Fortunately, Zed Ink staffers were fast-thinking and fast-acting, with some jumping behind the wheel of arriving vehicles to speed up the parking process and others negotiating with neighboring businesses to borrow parking lots for the night.

Inside the event, staff members paced the food — an assortment of “casual, heavy, guy-oriented food designed by Los Angeles-based Urban Palate, circulated on military cafeteria-style trays,” Hearne says — to the best of their abilities. And “Obviously,” Hearne adds, “we sent out for more alcohol.”

Buchan notes that the “model for celebrity events” — this one lured the likes of actors Jon Heder and Josh Duhamel and socialite Paris Hilton among others — “is that the celebrities come and go.” At the preview event, however, the celebrities came and they stayed — lingering celestial bodies, orbiting the bright glow of Halo, which was, without question, “the star of this event,” Hearne says.