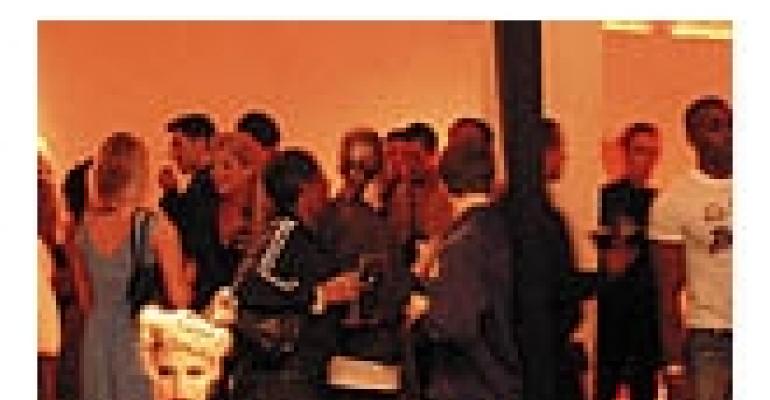 Corporate events can bring to mind yawn-inducing programs requiring hours of sitting. But these events have evolved, just like the multitasking cell phones their young employees favor. With Generation X firmly established in the workforce and Gen Y entering it, corporate events have an entirely new type of employee to entertain — one who's tech-savvy, endlessly interactive and firmly under 40. Soirees for this set are often celebrity-heavy, formality-light and all set to knock the socks off a group blasé to the bone.

The goal was to make the experience tactile and appealing to the trendsetter, socialite and celebrity participants. “Guests weren't just voyeurs, they could interact with the brand,” notes Lauren Boukas of Chicago-based XA, the event producer. Another big focus of the night: drinks. Alcoholic and nonalcoholic tea-based cocktails included a vanilla caramel truffle tea with Baileys, milk and cinnamon. Other components of the event were fresh-faced actress Emmy Rossum as host and a partnership with YouthAIDS.

“Know your audience” goes without saying, but Marina del Rey, Calif.-based AMCI took that practice to the hilt with the “Scion Behind the Wheel” promotion spanning a 13-week period beginning last April. Toyota's Scion, targeted to the 20-something market, wanted to get its Optimize car accessories into the hands of this tech-crazy segment. To do so, AMCI had to create “grass-roots event programs without coming across as overtly commercial and losing [Scion's] hip mystique,” according to executive producer Tom Burke. To keep the brand's edge, AMCI scoured the nation for hip venues, favoring cool, independent record stores, for example, over national chains. And because “Scion customers and prospects keep odd hours,” Burke notes, the promotion took place between 6 p.m. and midnight — at times extending as late as 3 a.m. — to tap into the after-hours club and all-night coffeehouse scene. As for the road crew picked to promote the items, “If you looked at our event staff and many of the participants at the event, you'd have a hard time telling who was who,” Burke claims.

Another effective marketing tool: the graphic-wrapped Airstream mobile lounge, dubbed “Streamie,” which Burke describes as “a cross between an automotive accessory shop, a video arcade and an underground nightclub.” It showcased videos, music, a computerized product configurator, computer games and 100 new Scion accessories. “Participants got on, grabbed a can of Rockstar drink from the built-in mini-fridge, and it was the perfect place to engage them in the brand and product,” Burke notes. And of course, no car promotion would be complete without opportunities to drive the car itself, heavily customized with Optimize accessories.

The success of the program shows in the numbers. The promotion attracted 34,845 consumers, far exceeding the 25,000 goal, and the opt-in rate was 30 percent — nearly double the industry average, Burke says.

To produce a dinner and awards program for 300 guests who don't like to sit down, Wilmington, Del.-based Planning Factory International kept things light, festive and interactive. Ing Direct bank em-ployees, primarily in their early 20s to mid 30s, boarded a coach during February's annual sales conference in Philadelphia for the festivities — dubbed the Ing Direct Orange Film Festival — with no idea where they'd be taken. The first stop: Reading Terminal Market, Philadelphia's historic farmers' market, where pre-dinner cocktails and hors d'oeuvre awaited the guests. Entertainment enhanced the “street” feel of the event with mummers, strolling magicians in urban-chic attire and break dancers, who inspired some spirited guests to dance alongside.

The next stop was the awards show — which continued the festive atmosphere with upscale tweaks — at the historic Trocadero Theatre. Planning Factory avoided “90 minutes of theater-style seating hell,” according to staffer Kate Van Graafeiland, by creating a “mingling” atmosphere for the ceremony. The event team relied on high-top tables and stools, cocktails rounds and chairs, and ottoman lounges with an upscale-funk vibe; only a small section was devoted to theater-style seating. It was a welcome setup for an evening keying on audience involvement, Van Graafeiland notes.

Variety is the spice of life, at least according to Chicago-based Event Architects, the organizers of the Absolut Summit in Miami in November 2004. The two-day retreat did some major multitasking by combining a vodka promotion with education, exercise, and even R & R. The event targeted bartenders aged 21 to 35 from Miami's hot spot bars and clubs by hosting them at a private mansion on a Monday and Tuesday, thus avoiding conflict with the group's busy weekend schedule. The mansion's foyer housed the event's raison d'etre: bars serving cocktails with the newest Absolut flavors for bartenders to test. Besides Absolut, the retreat had plenty of additional sponsors in magazines organizing education sessions, such as Details' “How to Be a Deejay” class, Real Simple's massage room and Food & Wine's cooking demonstrations. Highlights included an advance screening of “The Incredibles,” courtesy of Entertainment Weekly, and the opportunity to compete against the Playboy X-treme Team — a group of Playmates who are also extreme athletes — at the obstacle course, rock-climbing wall and virtual golf.

Southfield, Mich.-based Pulse220 considered all facets of the event — from entertainment to food to safety — when planning for a group including 60 percent 20-somethings and 20 percent 30-somethings. An entire hotel set the scene for the 4,000-guest holiday event for Livonia, Mich.-based Quicken Loans in December.

But there's more to consider than simply supplying a good time. “For better or for worse, 20-somethings like to drink, and Quicken Loans is very cognizant of that,” notes Pulse220 CEO Craig Erlich. The 1,000-plus-room hotel provided plenty of sleeping rooms to help prevent drinking and driving, while a cab service provided another safe transportation option.

Despite the special tweaks planners put in place, the goal of an event for a younger generation isn't that different from any generation. “At the end of the day,” Erlich says, “you've got to make sure, as with any event, that you are creating an experience that's going to reach the attendees, that's relevant to them.”

Greg Jenkins, partner of Bravo Productions in Long Beach, Calif., has spoken on the topic of events for Generations X and Y at The Special Event, ISES Eventworld and Meeting Professionals International. Here he gives tips on getting and keeping the attention of a demographic with a notoriously short attention span.