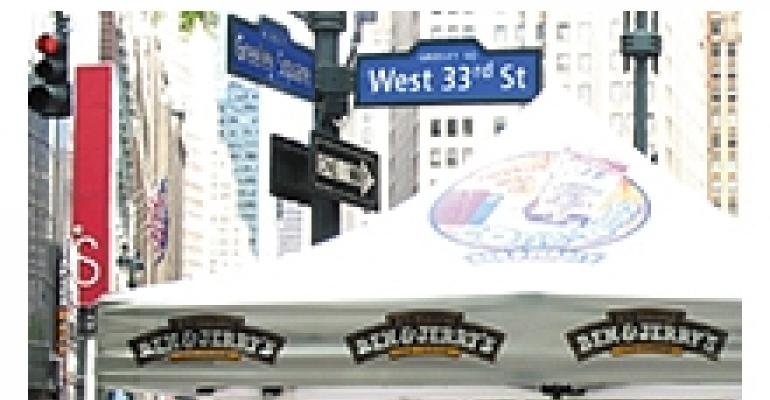 EIGHTY-one percent of businesses can't be wrong. That's how many companies are turning to event marketing to make a meaningful impact, according to the EventView 2006 study from George P. Johnson Co. and MPI.

Ice cream-maker Ben & Jerry's is famed for its socially responsible operations and its lighthearted marketing, two messages TBA keyed on in the campaign. For example, the “Cone Samaritans” not only handed out cones in busy downtown “cone zones” but also distributed the treats at firehouses, police stations and children's hospitals. And while some consumers were lucky enough to be handed a cone, others had to work to win it, either by showing their prowess with Hula Hoops or by riding a branded scooter.

Even such a straightforward campaign brought challenges. The summer's record heat required TBA to maneuver a total of nine 24-foot freezer trucks through congested downtown streets. Also, the campaign included a “Cone-O-Gram” option, which enabled consumers to have a cone delivered to a friend or co-worker within city limits. The problem: Many deliveries were slated for high-security office buildings. “Some friendly smiles, quick thinking — and a great deal of cone bribes — went a long way,” TBA management says. “Our messengers managed to work their way into even the most secured buildings in New York, Chicago and San Francisco.”

While the sole goal of many event marketing campaigns is to put the product and the consumer together, Los Angeles-based AMCI put a new spin on the traditional ride-and-drive. With its “Taste of Lexus: Premium Edition” campaign last fall, AMCI positioned the brand as emblematic not just of a car but of luxury itself.

Believing that previous “Taste of Lexus” events, which got their start in 1999, had become “stale and museum-like,” AMCI management set out to refresh and reinvent the campaign. The venues were redesigned as lively, covered “marketplaces” with greenery, bamboo decor and comfortable couch seating. Upscale grazing menus — including crab cakes with lemon kiwi relish, charred pepper and mozzarella on crostini, and mini pastries — replaced static turkey/prime rib carving stations. “Such food delivered a ‘quality versus quantity’ message that better reflected the Lexus brand,” AMCI says, and also reduced waste. To convey the luxury lifestyle message, the venues featured stations offering spa treatments and golf instruction. To boost guest interaction, a Lexus host interviewed both guests and Lexus “product specialists” (a deliberate contrast to high-pressure salesmen); the interviews were broadcast live throughout the venue.

AMCI got plenty of mileage from the new campaign. All told, 40,000 guests in 12 U.S. markets participated in the events, twice the number as in the 2004 campaign. Some 97 percent rated the event as “very good” or “excellent,” and a third-party analysis gave the 2005 campaign a 165 percent ROI.

In preparation for the April launch of the new washing machine line from its client, German appliance giant Miele, agency Face to Face faced a challenge. In the past, Miele's product launches emphasized the technical capabilities of its products. But in a saturated market, Miele needed to make a big splash. Cologne-based Face to Face added the experiential component by giving guests an insider's view of the washing machine — literally.

The program kicked off with 39 events at Miele headquarters in Gutersloh. Visiting in small groups, a total of 3,000 dealers from 23 countries crossed an interactive water “carpet” to find a 46-foot-tall honeycomb-patterned “drum,” echoing the distinctive Miele machine design. In an interactive element, guests used laser pointers to open the drum, revealing 360-degree projections and revolving presentations of products and live entertainment. Models sported “clothing of tomorrow,” futuristic designs that needed — of course — the finest, most modern washing.

A parallel program brought 6,500 German dealers to a series of 66 events in eight cities. Again, outsize honeycomb “drums” served as the event motif, acting as showcases for the appliance and its features as well as entertainment stages.

The launch has helped Miele clean up, management says. The brisk pace of orders “is making us optimistic that — despite high market saturation — we will be able to expand further on our success,” notes Karin Padinger, Miele's head of advertising.

The magazine's title says it all: The goal of lifestyle publication Real Simple is to offer practical, stylish solutions to life's daily challenges. And for the annual challenge of buying holiday gifts, agency XA brought the magazine's pages to life with a five-week “Holiday Solutions” mall tour targeting female shoppers.

From mid-November through mid-December, New York-based XA set up custom “living rooms” in high-traffic malls in five states. The environments featured areas themed “entertaining,” “style,” “beauty” and “gift giving,” each offering an experience, idea or amenity to guests. Besides bringing the magazine's editorial thrust to life, the event also brought the magazine's advertisers to the fore. For example, the “entertaining” section offered easy recipes and tips on how to clean up after party guests go home, including giving attendees the chance to test a vacuum cleaner from advertiser Dyson. The “gift giving” area displayed gift suggestions in various price ranges; all gifts were available from stores at that specific mall.

Ironically, the event's logistics were not real simple. The malls put strict limits on timing of setup and strike so as not to upset their customers and merchant tenants, forcing XA's crews to start work after 10 p.m. each night. To distribute the 2,500 Real Simple logo totes in each market, a team of five workers spent an entire day unloading and organizing 12 rolling racks of totes, each rack loaded with 208 totes.

Yet the results were simple — simply great. More than 100,000 consumers visited the events, and XA estimates that TV coverage, especially on the local morning shows, created another 330,000 broadcast impressions.