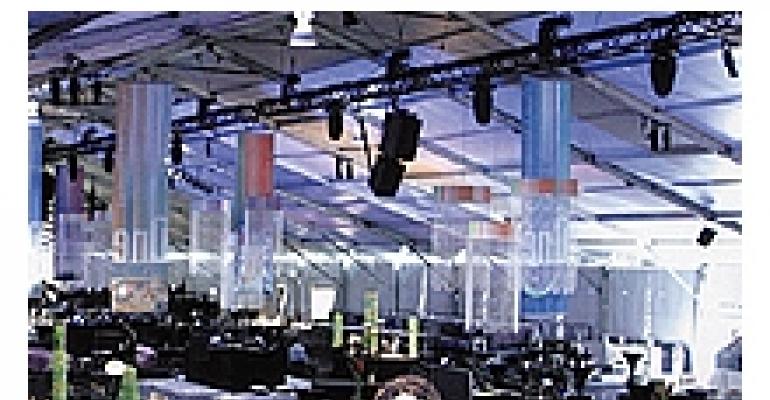 ONE FOR THE RECORD BOOKS

DESIGNING and constructing a venue to hold 5,300 corporate event attendees on scant notice would have been challenge enough for the team at Calgary, Alberta-based XV-Experiential Events. Add to that an 11th-hour entertainment emergency, and one can see why Experiential's Kenneth Kristoffersen calls oil and gas conglomerate EnCana's “One” event a “massive undertaking.”

Kristoffersen says that challenges for the event, intended to acknowledge company employees and celebrate the three-year anniversary of a major corporate merger, started right from the site.

With no venue in EnCana's home city of Calgary big enough to hold the huge guest group along with food stations, bars, entertainment and dancing, Kristoffersen and team were faced with the prospect of creating one from scratch. And not just any temporary shelter, either. “A custom-built venue would have to withstand the elements, as it is still winter in Calgary {in event month April}, and temperatures can still be as low as minus-15 degrees Celsius {5 degrees Fahrenheit}.”

Aided by Stoney Creek, Ontario-based Regal Tent Productions, the crew built a 70,000-square-foot main tent on the grounds of a local military base. During a rain- and snow-battered load-in and install, blow heaters had to be brought in to ensure the structure did not crack from the cold, Kristoffersen recounts.

With only two months' lead time, the event team had to run the tent through permit processes with the City of Calgary, which sent inspectors from air quality, fire and safety, gas, sanitation and other departments to “be briefed on an ongoing basis and to sign off on each stage of the load-in,” Kristoffersen reports.

Then there was all the stuff slated to go inside the big tent. The need for plenty of furniture — including 400 couches, but no event rental companies in Calgary, Vancouver or Toronto able to fill the order — meant that soft seating items had to be custom fabricated. That project required more than 2,610 yards of fabric and 540 hours of sewing to make the needed couches, slipcovers and throw pillows, Kristoffersen notes.

As the event date drew near, Calgary's Hyatt Regency did its part, readying more than 30,000 pieces of sushi, 30 chocolate fountains and the makings of a fleet of signature “EnCantini” cocktails, which would hold more than 12,000 illuminated “ice cubes.”

Even when venue, furnishing and catering obstacles were overcome, the event production challenges were far from over.

Most daunting of all was the last-minute pullout of singer Burton Cummings of veteran Canadian band the Guess Who, who fell ill. As the One event was planned to mark the anniversary of the merger of Canadian oil and gas powerhouses Alberta Energy Co. and PanCanadian, using an iconic performer was a natural. But with the “surreal” phone call at 7 a.m. the morning of the big event telling him that his star was suddenly hospitalized, the planned “great achievements” entertainment theme threatened to fall apart at the seams, Kristoffersen notes.

Staying calm in the midst of crisis, Kristoffersen called on a well-connected entertainment agent to locate a replacement, and managed to snag a performer who often steps in for Cummings. “I called my client at home at 7:30 a.m. and explained the challenge and the solution,” Kristoffersen recalls. That solution included adapting the show to change the premise of speeches from “great achievements” to “great teamwork.” “We would frame the entertainment around the message that when one member of the team is facing challenges and struggling, the other members of the team jump in to lend support and help,” the producer explains. Fortunately, the client gave full approval, and the Experiential team was back in action. In another stroke of good fortune, and as a result of Experiential's professional handling of the situation, Cummings' management company gave back a substantial portion of the singer's performance fee to Experiential — something it was not required to do in its contract, Kristoffersen says.

The fact that the production team, including an army of ISES-member partner vendors, managed to execute the One event in the face of major complications is a testament to its adherence to its client's stringent standards of professionalism, according to Kristoffersen. Noting that EnCana's corporate constitution outlines desirable attributes including discipline, trust-worthiness, focus and accountability, he says, “Without a doubt, the only way this event was achievable in such a short period of time was because {each team member} embraced these attributes and combined them with {their} personal and professional passion for excellence.”

The accomplishments of Kris-toffersen's crew in pulling off the Calgary celebration — while simultaneously co-ordinating “companion” One events in 29 cities across North America — is the reason the producer calls the event “‘One’ to be remembered by all.”