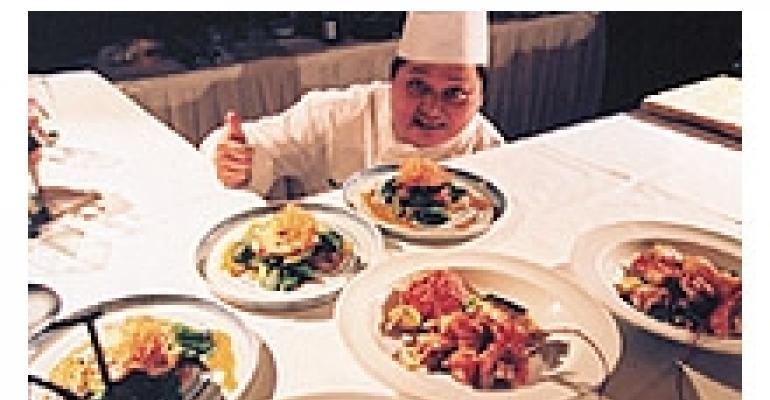 WHAT BETTER WAY to give preferred meetings clients a taste of your properties' culinary talents than by letting them experience your top toques in action? Such was the bright idea behind Festivex Special Events' “Iron Chef” theme dinner for client Starwood Hotels & Resorts Worldwide. With Japan's wildly popular competitive cooking show as its model, 11 weeks of lead time and a $55,000 budget, the Gatineau, Quebec-based event firm stirred up a night of highly interactive fun that was two parts strict planning and one part unscripted excitement. Here's their recipe for success.

Settling on the Iron Chef theme was the easiest part of planning the February event, according to Festivex senior production manager Carole Saad. “The basis was simple — create drama by revealing a secret ingredient, put 60 minutes on the clock, and have three [Starwood] chefs compete for the ‘Starwood Iron Chef’ title,” she explains. The message intended for the 80 meeting planners in attendance: “‘Look at what our chefs can create in a limited kitchen within 60 minutes — just imagine what culinary creations they could design for your next conference!’”

Mixing the right ingredients together was a somewhat tougher task. First there was the job of finding an ideal candidate to take on the role of “Chairman” — the TV show's flamboyant emcee, who “invites” chefs to the kitchen arena to compete for the coveted title. In most cases, Saad says, “a professional actor would have been an automatic choice.” Her client, however, had other ideas. “One of the global account directors apparently had a great sense of humor and was very familiar with the show,” Saad recounts. So, throwing caution to the wind, she e-mailed delighted Starwood staffer Brad Doell and recruited him to take center stage on event night.

With the Chairman cast, Saad and her team turned their attention to adapting the Iron Chef concept to about as un-TV-like and non-Japanese a setting as possible — Le Centre Sheraton Montreal in Montreal. A late-stage room change further complicated the enterprise.

But Saad says she used the switch from an 83-foot-by-59-foot, high-ceilinged space to a long, rectangular, low-ceilinged room to her event's advantage. With the room entirely draped in black, “the rectangular shape allowed for the chef stations to be located far enough away from the dining area…and ‘hidden’ until bright lights revealed this area at the competition's debut.” A smart grouping of tables into clusters of three, coupled with signage indicating chef names, created automatic fan bases for the selected Starwood food pros.

Come event night, surprise was the main course. As Starwood's guests entered the room and took their seats at tables dressed in dragon-motif linen and topped with white orchid and bamboo centerpieces, “nothing gave away the explosion of food art they were about to indulge in,” Saad says.

Enter the professional actor hired as the evening's commentator, who appeared upon a stage adorned with rice paper scrolls and a watercolor backdrop to introduce the heavily costumed Chairman. “The fact that Brad's role remained a secret and that he was so well-known to the audience resulted in a great icebreaker,” Saad notes. “The minute guests realized who was under the wig and fake accent, the room exploded in laughter.”

Minutes later the room exploded with the scent of cooking, as three Starwood chefs set about preparing their proprietary feasts using lobster — the announced secret ingredient. As the chefs cooked, guests were invited to roam the room, which they did enthusiastically — cheering, nibbling, even reporting back to “their” chef on the progress of the others, according to Saad. Finally, guests returned to their seats for dinner and the announcement of the winner — via an Asian lion made up of a line of costumed dancers — that burst into the room and positioned itself in front of victorious chef Michael Picken of the Sheraton Centre Toronto Hotel.

Saad cites a firm but flexible grip as key to pulling off the interactive event. “There were only two elements that we could control, and if these two elements were well prepared, they could, in our opinion, support the show,” she says. These were, she notes, a well-written, detailed script and a professional commentator — a hired actor in this case — who could maintain a high energy level throughout the evening no matter what.

In the end, it was interactivity itself that gave the event its momentum. “Watching chefs prepare food is one thing, but being up close and being invited to stir or chop, or better yet, taste, is fun!” Saad explains. “Guests took ownership of their chefs, and from the howls and cheers in the room, believe me, they took their roles seriously. It was a great event.”

Wonton with Shrimp and Chicken Bouillon

Flambé of Banana with Rum and Mango Sherbet