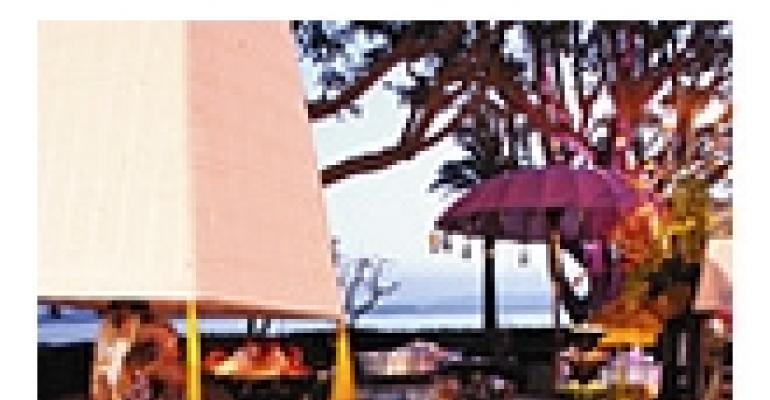 TIME FOR A CHANGE

Hotel giant Starwood has been undergoing some giant changes in its corporate structure, and wanted a theme of change at its Global Conference, the biennial event that brings together 1,700 general managers and owners from around the world. To help introduce Starwood's new direction and marketing initiatives, Los Angeles-based Event-Works developed the “NextWork” theme, and worked closely with Starwood's culinary and brand marketing teams to create vivid brand experiences at the Jan. 9-12 conference.

Luncheons became concrete extensions of the Starwood brands. Four Points, for example, introduced its “honest comfort” initiative with all-American table decor, down to the gingham overlays and pot holders at each place setting, and a menu of braised short ribs and other homey dishes served in Mason jars.

Even breakout sessions were recast as “Deep Dives” into each brand. For example, the St. Regis team evoked its “modern luxury” image by draping its meeting room with vanilla velvet and installing trees dripping with crystal and mirror strands. The Westin team scented its room with its new signature fragrance, and served its new “elixir-infused” waters, soon to be offered in Westin lobbies.

Since the conference, the EventWorks team has heard plenty of praise from Starwood executives. But Yan-Armstrong says moments during the conference were clear signs of success — during one party, “so many camera flashes were going off that it looked like the paparazzi had cornered an A-list celebrity,” she recalls. “General managers, owners and even chefs were having their pictures taken with our floral pieces!”

Awards programs are supposed to inspire employees to be winners. But if the employees feel no connection to the program, then time and money invested are lost.

To familiarize the employees with the South Beach theme — a recognizable name but an area few employees had actually visited — Bravo supplied posters showing South Beach fashion and style; the images were posted in the corporate offices months ahead of the event. Because the young employees had “grown up on video games and sharper images,” explains Bravo partner Greg Jenkins, “strong visuals and bright colors were needed.” Bravo came through with dramatic decor elements at the 300-guest bash that included linen and chair covers in orange, hot pink, aqua and lime green and 10-foot-tall organza columns lit in the same colors; neon flamingoes, fish and palm trees for centerpieces; a custom 3-D art deco portico at the entrance to the ballroom; and a hand-painted backdrop depicting South Beach's famed Sunset Drive at sunset. Entertainment included a cigar roller, a 12-minute video featuring employees as characters from Miami-based TV show “Miami Vice” and the movie “The Mambo Kings,” and costumed employees leading a conga line.

Bravo knew its reinvented event was a winner when accolades poured in from both senior management and their younger employees. Remarkably, “There were numerous requests from the guests to acquire the decor,” Jenkins notes.

The challenge: How to create a news-making grand opening for a hotel when the hotel has already been open for four months?

French hotel operator Concorde Hotels & Resorts wanted a change from the standard “gala opening plus guided room tour” recipe for its Hotel Concorde Berlin four months after its soft opening. But the company still wanted to drum up plenty of press and to lay claim to the high-end niche in the market. Hamburg-based Eventlabs hit the books to come up with an entirely new concept — a literary salon.

The first “Literarische Soiree,” or “literary evening,” took place April 26, with 500 guests including press, clients and potential clients coming to the hotel to enjoy a buffet dinner and a series of 16 readings by celebrities in 16 of the hotel's suites and meeting rooms. Guests could purchase a signed copy of the books being read with proceeds benefiting literary programs; every single book was sold, reports Eventlabs partner Cedric Ebener. On April 30, the event was open to 100 local Berliners, and included a champagne reception and three 30-minute readings — each held twice — in suites.

As Ebener explains, the event “let all guests experience the entire hotel, enabled many contacts between guests and hotel staff, and presented a unique selling proposition, reflecting a highly positive image of the hotel brand and the theme ‘savoir-vivre,’” the French term for knowing how to live well. To stress the themes of art, architecture and design, the event team stayed away from adding decor elements, letting the beauty of the hotel's architecture shine.

The media knew a great event when they saw it. Within a week, the event had been covered by local and national newspapers, society magazines and TV.

COME IN FROM THE COLD

New York-based TSE Sports and Entertainment traditionally entertains guests of big-time corporate clients with a golf outing the day before football's mega-event, the Super Bowl — a fine plan when the game takes place someplace sunny. But this year's Super Bowl was slated for Feb. 5 In Detroit, a month when the average high is a chilly 36 degrees Fahrenheit. TSE quickly took the party indoors and, on behalf of client Anheuser-Busch, hosted nearly 400 guests at a local hotel for an afternoon of food, drinks and the hottest game today — poker.

Dubbing the event the “Celebrity Showdown in Motown,” TSE spiced up play by adding theme decor elements, including logo poker chips, and inviting famous former players to join in. Along with poker, guests could bet on videotaped horse races. A live announcer called the races, substituting the names of guests for the horses' names.

TSE management was nervous before the event: “We were holding our breath,” notes TSE president and CEO Robert Tuchman. But their fears quickly melted away. “It was so well received,” Tuchman says. “We heard so many great things from people.”