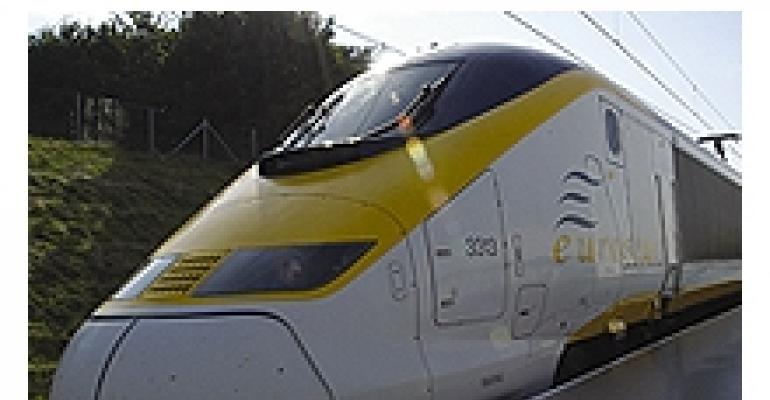 ON THE RIGHT TRACK

FOR LONDON-BASED Moving Venue Management, it was a project that could have been derailed at any time.

MVM was hired by London and Continental Railways (LCR) to stage the launch event for its new Channel Tunnel Rail Link. The link is the first high-speed rail line in the United Kingdom, and the first new major railway to be built in the U.K. in the last 100 years. As part of Eurostar, the international high-speed passenger train service between the U.K. and mainland Europe, the link represents a high-speed, high-stakes opportunity to boost rail travel between the U.K., France and Belgium.

From the start, the September 2003 ceremonial launch — a two-day event slated for two locations — presented a daunting set of challenges. The guest list, comprising nearly 4,000, included international media, the travel and tourism industry, politicians and railway staff. Although such a project should have 18 months' lead time minimum, “We had just nine months, made worse by the traditional French summer holiday of August, the month preceding the event,” notes MVM managing director Richard Beggs.

Beggs turned to what he describes as an “accelerated event management strategy.” By breaking down the event schedule into “bite-sized” projects doled out to separate event teams, maintaining flexibility and communication, and constantly researching alternatives, MVM kept the mammoth event on track.

The initial plan was to bring in 3,800 guests from London, Paris, Brussels and Lille, France, via Eurostar trains over the new length of track to the Ashford, Kent, train terminal, where British Prime Minister Tony Blair would speak. With no suitable venues for such a large group, MVM worked with De Boer UK to set up a 250-by-50 meter (820-by-164-foot) temporary train station at the neighboring town of Sandling for the official ceremony. The team also installed eight structures on the grounds of nearby Leeds Castle, including an exhibition space and two party structures, one 30 meters by 90 meters (98 feet by 295 feet) and one 25 meters by 90 meters (82 feet by 295 feet). Here, guests could watch the Sandling ceremony via satellite link, then enjoy a celebratory luncheon.

That was the plan, anyway.

Only 12 days before the Sept. 16 ceremony in Sandling, the prime minister canceled. The loss of such a luminary would have been “devastating” for the link's PR profile, Beggs explains, which left the event team with a sole option: “Our only hope was to find a different slot in his diary on the same day.”

The plan to have Blair for three hours at Sandling quickly changed to a 25-minute appearance at London's Waterloo Station. The event team worked with transit authorities to devise a satellite-enabled set that could be built in just two hours, minimizing the impact for travelers at the bustling station and limiting Blair's exposure to danger. The London Marriott Hotel County Hall was pressed into service for 110 VIP guests to enjoy a reception and luncheon directly before Blair's speech. A detailed pre-event administration process moved guests from the hotel through security and to their seats at Waterloo Station before Blair began speaking in order to allow full use of the brief time slot. Blair's speech, in which he noted his pride in a project that was completed both on time and on budget, was transmitted via satellite link to Leeds Castle, where it was recorded for the press and for presentations to be held just hours later.

Next, guests and media were transferred via a special Eurostar train to the temporary station at Sandling for a presentation by Alistair Darling, secretary of state for transport, and a reveal of two brand-new Eurostar trains on the new track. Meanwhile, another 1,100 guests arrived at the Leeds Castle site for a champagne reception and three-course luncheon. Following the meal, these guests moved to the specially constructed auditorium to see the live satellite feed from Sandling and an edited recording of Blair's speech at Waterloo Station, followed by an exhibition of highlights from the link's construction and the new Eurostar branding. Some 60 VIP guests stayed on at Leeds Castle that night for dinner inside the castle itself; the very-VIPs slept in some of the castle's (allegedly) haunted bedrooms.

Day Two targeted the European travel industry, with 1,200 guests treated to a luncheon and the Eurostar presentation at the Leeds Castle site. Another 1,200 guests, primarily LCR and Eurostar staff, arrived that afternoon for a champagne reception followed by a 70-minute presentation during which the dining area was turned over into a contemporary party space. Here, the final-night guests enjoyed buffets and a live band.

Of course, such a major project costs major money. Eurostar's outlay — considering all event costs plus trains, collateral and PR — hit £4.85 million (roughly $9 million). But that came back many times over, with double-digit sales growth week after week, plus a flood of publicity. According to figures from Eurostar, the event program reaped £36.3 million ($68 million) in tangible benefits, not counting such intangibles as bolstered staff morale and loyalty.

But Eurostar's outstanding return on its event investment should not be surprising, Beggs maintains: “You don't spend this much on an event without having specific, detailed targets and goals.”

Kicking off the high-speed Channel Tunnel Rail Link — the first major United Kingdom rail project in more than 100 years — required two days of events that added up to: