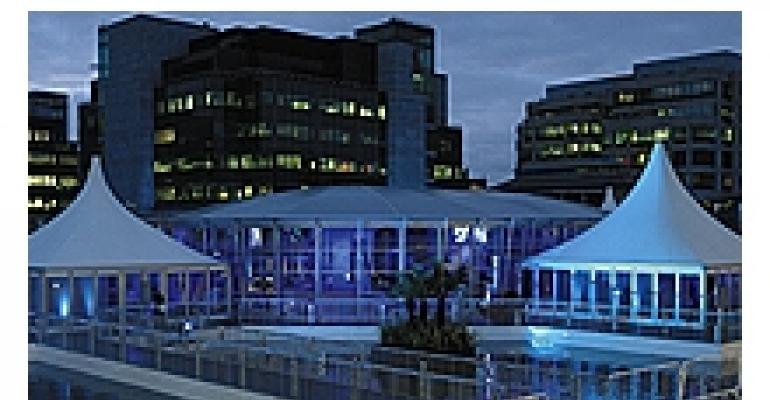 LUXURY-car dealers are hard to impress. Their stock in trade is high-performance cars, they are regular guests at high-octane parties. But when was the last time they saw a car drive on water? For dealers at the BMW 3 Series launch in Ireland, it was last March.

To rev up nearly 2,000 BMW dealers, clients and potential customers, BMW Group Ireland commissioned Dublin-based EuroEvents Ltd. to create the 3 Series launch. The company responded with an event that at first appeared to be the standard recipe of striking venue plus fine food plus engaging entertainment. But the “car launch as usual” took a back seat to the event team's plucky plan to deliver an “absolutely unique” event.

The EuroEvents team kicked off the project by developing a groundbreaking venue. The company's research turned up the handsome new Panorama Dome structure from tent giant De Boer. Not only does the transparent, oval-shaped pavilion offer 360-degree views, but it had never before been used. “Coincidentally, it was also similar in style to the very latest BMW dealership premises,” notes EuroEvents director Mark McGrath.

As for siting the pavilion, the International Financial Services Centre — Dublin's financial district — offered both accessibility and the target customer profile, but no piece of land big enough. That is, no piece of dry land big enough. The EuroEvents team came up with a plan to temporarily drain the river basin, enabling setup of pavilion and the centerpiece car reveal, where the BMW “drove” on water.

On event night, guests walked across a gangplank on the River Liffey to the pavilion platform. Searchlights heralded their entrance, along with an aerialist suspended from a giant, glowing “Heliosphere” balloon.

Once inside the pavilion, guests enjoyed cocktails and a gourmet grazing menu including wild Irish salmon on roasted vegetables with a sorrel beurre blanc and balsamic glaze, and pan-seared rack of lamb on potato puree with a raspberry and red currant sauce.

Keying on the BMW 3 Series launch theme “the essence of sportiness,” the pavilion's floor was decorated with a three-lane athletic track. Two dozen banners depicting the grace and power of athletes were suspended around the circumference of the pavilion. After a welcome from the managing director of BMW Group Ireland, popular sportscaster Des Cahill introduced a custom 10-minute video depicting famous moments in Irish sports. Next came the airing of the new 3 Series TV commercial on four suspended screens. Beneath the screens stood four cars swathed in drape, promising the car reveal.

But instead of seeing the drapes whisked off the cars inside the pavilion, an explosion outside grabbed guests' attention. They turned to find a dramatic scene as a new car, positioned on a submerged platform, drove “on” the river. The car passed cued fountains and pyrotechnic displays up to the water wall at one side of the pavilion, which stopped flowing for a moment of drama. Then the four cars inside the pavilion were unveiled and a looped video showing the car in action played on the screens, enabling guests to admire the cars and socialize for the rest of the evening.

To overcome the challenges in staging such a spectacular event, EuroEvents frequently found itself swimming upstream.

For starters, the Irish launch had to coincide with similar launches throughout Europe. “This meant there was no leeway as far as dates were concerned,” McGrath notes. The tides were working against the event team, which had to turn to special pumps to drain 125,000 liters (33,000 gallons) of water into the adjacent river to allow for the venue build and car reveal.

Although the Panorama Dome offered the dramatic impact the team wanted, the structure was designed to be secured to the ground, not to a platform. The event team commissioned special base plates to pull off the unique installation. Also, two bays of glass windows were switched out with a plastic wall to allow for the dramatic entrance of the star car.

The Dublin Docklands Authority demanded a strict post-event load-out — “Everything had to be dismantled within 24 hours starting at 11 p.m. Friday night,” McGrath says. “To compound matters, there wasn't sufficient time to drain the basin and refill it for the next day.” Superb teamwork — including the cooperation of more than 30 contracted companies and the muscle of a 100-ton crane — got the job done.

Although the event team was blessed with a healthy budget — the event earned a Gala nomination in the “Best Corporate Event: Overall Budget Above $500,000” category — the team spent its resources wisely. One example: “The Heliosphere creates an inspiring spectacle — however, it costs €4,000 {$4,800 U.S.} to fill,” McGrath notes. “Rather than fill it four times over the four days at a cost of €16,000, a clever system was devised whereby the helium was decanted into a 60-foot bag at the end of each day, allowing the Heliosphere to be refilled every morning at minimal cost.”

Along with an enrapt audience, EuroEvents earned a proud client. “BMW Group Ireland expects perfection at all our events,” notes the company's corporate communications manager, Clare O'Neill. “EuroEvents, with their unique blend of professionalism, creativity and innovation, have ensured that the high expectations of our company are without question met.”