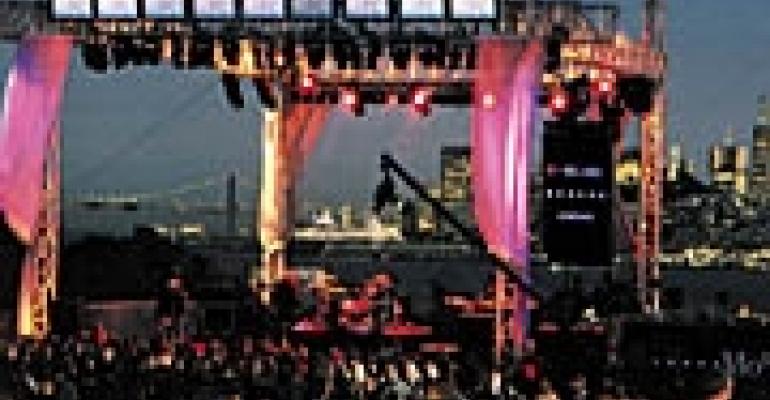 AN ISLAND PARTY is the perfect occasion for tiki torches and tropical drinks, right? Wrong — when the island in question in Alcatraz. With the infamous former prison-turned-tourist-attraction as the site for her October event, Bill Graham Special Events' Molly McDaneld found herself up against blustery bay gales, flocks of nesting birds and strict no-alcohol rules. But with her team's careful planning and “the longest production schedule I've ever done,” says the San Francisco-based company's executive producer, client T-Mobile reaped the benefits of The Rock's one-of-a-kind locale.

In building the 2,000-attendee branding event, McDaneld had to meet not just the client's needs, but the strict requirements of the National Park Service — manager of the landmark island.

McDaneld, who had never worked at an event on the island before, immersed her team in a six-month process that involved multiple official hearings and submission of detailed event plans. Complicating the early stages of planning was the presence of legions of migratory birds, which occupy the island's parade grounds for 10 months of the year. “We couldn't physically do a walkthrough until three weeks before the event,” she explains, “not to mention the cleanup involved.”

To protect the remaining birds that live on the island year-round, McDaneld had to ensure that “no light or sound {would} hit the dark night sky” during scheduled performances by bands Train and Barenaked Ladies. Skilled sound engineer George Edwards of Hayward, Calif.-based Sound on Stage applied his expertise — as well as a sophisticated V-DOSC system able to “pinpoint exactly where the sound is going,” McDaneld says — to the tricky task.

Besides sensitive birds, there was the island's delicate infrastructure to protect. “Everything is historic,” as McDaneld puts it. “You can't mess with anything.” That meant laying trench plates over portions of the island's road deemed subject to preservation regulations.

The trench plates themselves, along with every event component from generators to lighting trusses, had to be packed into trucks and transported to the island on barges. As if that wasn't a tough enough load-in scenario, the trucks had to be crane-lifted onto the island, because a historic tunnel near the docking area was too small to accommodate the hefty vehicles.

With equipment load-in procedure all locked up, McDaneld and crew tackled the event's human element.

First, there was the union crew, which had to be transported in shifts to the event site aboard Blue and Gold Fleet ferries — the park service's contracted Alcatraz transportation outfit. “Normally you pay from when they start work,” the producer points out, “but we had to pay during transportation too.”

A tight work schedule and efficient use of the pricey water taxis necessary to move bodies after the ferries' last scheduled run — Blue and Gold service ended at 6:30 p.m. but crews worked until 3:30 a.m. — helped keep the event within budget during the four-day setup.

With the party finally ready to go at 4 p.m. on a chilly but clear Thursday, attention turned to attendees. Here, McDaneld says, the main challenge was staggering guest arrivals to the ferry departure terminal at Pier 41 in order to ease the security check and boarding process.

It was a particularly difficult enterprise, since guests — a mix of those who had won trips to the event through radio stations, T-Mobile clients, VIPs and invited press — were coming from locations all around the city. “We tried … we even lied a little,” she laughs, noting that attendee laminates indicated different departure times, even though the ferry was scheduled to leave at 5 p.m.

Attendees, though, paid little heed, all arriving “pretty much at the same time” because they were “so excited, they were freaking out,” McDaneld says. But even with the crush of the crowd, security went smoothly, though many attendees had to be relieved of flasks — part of the strict no-booze policy set by the park service.

In the end, according to McDaneld, T-Mobile got just what it ordered when it hired Clear Channel Entertainment, which in turn brought on subsidiary company Bill Graham Special Events. “It was very special,” she says, describing the event landscape as “absolutely gorgeous.”

Elements intended to communicate T-Mobile's “Get More from Life” brand message included signs reading “Get More View” and “Get More Water,” plus a cadre of trained “brand ambassadors” who circulated the event grounds showing guests how to have a good time with the company's newest wireless phones. Fun food — a variety of handheld options from burgers to homemade brownies from San Francisco's Melons Catering — added to the festival feel, while on-site media interviews with band members beefed up press impressions, which ran in the hundreds of millions, McDaneld says.

As for stage dressing, she adds, “there was no roof, no back. You can't beat the view of that glittering San Francisco skyline.” All that accessorized the chart-topping bands — clearly the event's highlight — were a few downstage plasma screens, plus an illuminated chiffon drape tied onto the trusses. “It just blew in the wind,” the producer says. “We couldn't fight the elements, so we went with them.”


Turn to page 49 for a list of resources for this event.